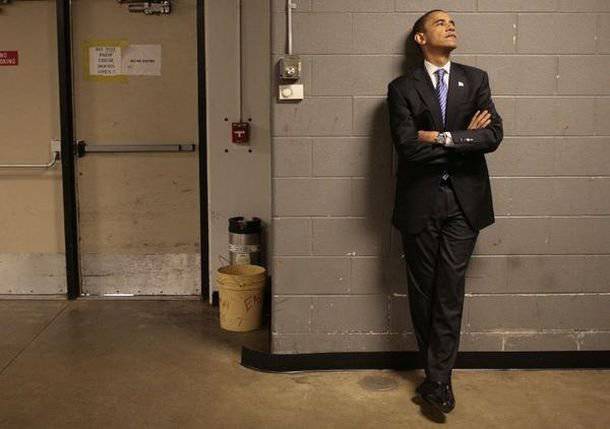 Barack Obama does not get off the phone, hoping to put together a coalition against Russia, which supported the referendum on self-determination of the Crimea. However, the traditional American allies, driven by their own national interests, agreeing with Washington in words, in fact, are trying to wriggle out of their “honorable duty”.

In the power cabinets of the Old World grumble. On the one hand, the United States is pushing and demanding to fulfill Euro-Atlantic duty. On the other hand, already at the first serious calculation, one has to grab his head.
Judge for yourselves, last year Russian-American trade amounted to less than 40 billion dollars, while the volume of trade between Russia and the EU exceeded 410 billion dollars. The volume of investments of European companies in Russia in the end of 2013 amounted to $ 288 billion. At the same time, the EU covers up to 30% of its energy needs with the help of Russian oil and gas. Germany - up to 40%. In general, it is obvious that any sanctions will cost more.
“All that can happen in this situation of the Western world is to collect some frigli-migli to strike at Russia's cosmopolitan elite in the hope of influencing Russian politics. But even in this there is no complete agreement between Washington, Brussels and London. We (especially “we”, in the sense of Great Britain and London) are in the most vulnerable position, since almost all sanctions against Russian persons or their commercial interests will harm our own interests, ”the British Guardian lamented.
Awareness of this fact dooms the US Western allies to steps to protect national markets from ... the effects of anti-Russian sanctions. 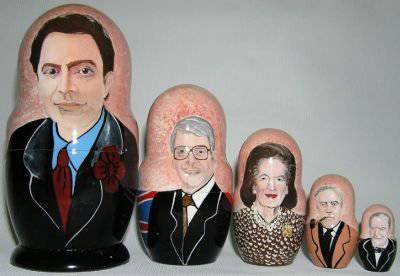 Among the Russian oligarchs, London is affectionately called "Moscow on the Thames". Russian billionaires own English football clubs, hotels, newspapers. “Russian money drives a significant part of the British economy,” sums up the Washington Post.
Sanctions threaten to undermine export of English weapons. “Over the past year and a half, the UK has sold rifles, ammunition, UAVs and laser equipment to Russia worth over 86 million pounds. In addition, 271 is currently exporting a license to manufacture weapons for Russians, ”writes the Huffington Post.
Or take the field of education. According to the Council of Independent Schools, in the UK, in private resorts, 2174 Russian children were trained. They gave the country about 100 million dollars. If Prime Minister David Cameron voted in favor of sanctions against Russia, he would have to explain why the quarrel around the distant peninsula led to the impoverishment of British schools.
Also interesting is the statistics of litigation in the English capital. More than 60 percent of the cases that are being pursued by the London Commercial Court come from Russia and Eastern Europe - payments for them are huge! Finally, Cameron’s re-election is unlikely to take place in a falling stock market. But on the London Stock Exchange more than 50 Russian companies are trading and if they leave ...
It is not surprising that, as a result, the Cameron government adopts a secret plan in which it says in black and white: "The financial centers of London should not be closed to the Russians." Then the relevant document “accidentally” leaks to the press, causing a cry of indignation across the ocean. It will be very, very difficult for Americans to change the position of the United Kingdom. Nothing personal just business. 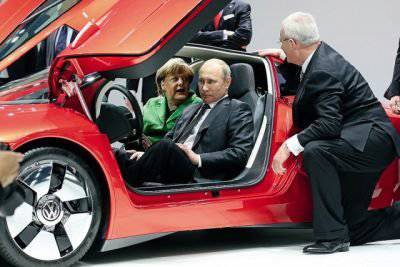 Russia is Germany’s fourth largest trading partner and the largest supplier of energy resources to German consumers. Moreover, since the beginning of the century, relations between countries have developed along an ascending line. Today, more than 300 thousands of Germans work in enterprises serving the demands of the Russian economy. In case of approval of the most rigid package of sanctions against Moscow, as the United States wants, they will all be unemployed.
“In general, for us, an embargo in another country is always bad, because we are an export-oriented nation, but economic sanctions against Russia will also harm Germany itself,” said Bundestag deputy Philippe Misfelder. Foreign Minister Frank-Walter Steinmeier, in his turn, is sure that in no way Russia can be excluded from G8, as Washington insists.
The danger for the German economy is difficult to overestimate. If, as a result of the sanctions, Moscow cuts gas supplies, then there will be a shortage of energy resources: their cost will jump up, and Europe’s largest economy will fall into recession. So, for Berlin now, without exaggeration, the moment of truth.
“In the past few years, we have seen that Germany often dictates the principles of the monetary policy of the European Central Bank,” recalls the New Republic. “Similar dynamics exist when making decisions at the European Commission, which is now formulating a consolidated package of sanctions. Most of the countries of the Union will support Angela Merkel’s reluctance to react in such a way as to provoke Russia into a ban on the export of energy resources. If Germany does not want economic sanctions to carry a real threat, then one should not expect that the European Union will go for it. ”
Indeed, Germany traditionally has a very strong influence on the opinions of its neighbors. So, for example, the leaders of the Czech Republic and Finland have already declared that their position is “close to the German one,” and they are against sanctions. 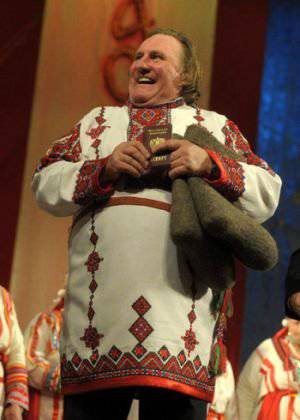 Last year, the automobile concern Renault, partly owned by the French government, ended up with an 75-percentage increase in sales in the Russian market.
Therefore, and not only, Paris today behaves just like Berlin and London. It also spins like in a skillet.
On the one hand, the other day the French publicly canceled a government delegation’s visit to Moscow, which had been planned as a symbol of close military cooperation with Russia. On the other hand, no one is going to cancel a number of existing defense contracts.
The French are completing for Russia the first of several Mistral military amphibious assault ships. The contract amount is 1,2 billion dollars. For the French, this is not only a lot of money, it is also an opportunity to load your shipyards with work. In general, cooperation in the military sphere between France and Russia is highly developed: joint development of a new generation of infantry fighting vehicles is under way, in addition, the French giant Thales received the right to staff the Russian armed forces with night vision systems, etc.
It is symbolic that, commenting on Russia's military ties with the “old members” of the EU - France, Britain, Germany and Italy - Estonian military experts conclude: “The prospect of the European Union to ever declare itself as a strong player in international security affairs is diminishing. Some NATO countries and the EU, bordering Russia, will increasingly trust those allies who sell weapons to Russia and rely even more on the United States as a security guarantor. ”
It’s not about sanctions against a common enemy, but to think about the expediency of the existence of the North Atlantic Alliance in its current composition ...

Italy is the main West European beneficiary of the South Stream gas transmission system. This has already said a lot, if not all. Therefore, the Italian government and parliament were very careful in their assessments, excluding open criticism of the Russian military presence in Crimea.
“No one wants the Second Coming of the Cold War, no one can afford conflict in the heart of Europe. This is globalization. We all know how relations are intertwined today: politics, security, economy, ”explains Italian Foreign Minister Federica Maherini. - Our goal is to find a way out of the crisis, so we need to restrain our assessments. The best way to reach an agreement between Moscow and Kiev is, first of all, not to contribute to the escalation of the conflict even verbally. ”

The official position of Rome today is this: although Russia's actions are "unacceptable", they, nevertheless, cannot be called "classic invasion." Do I need to explain that with this approach, Italy will do everything to mitigate anti-Russian sanctions?

Japanese Prime Minister Shinzo Abe is the only G7 leader who arrived in Sochi in February. He was not embarrassed that the rest of the American satellites chose to ignore the Olympics, expressing their disagreement with the law of the Russian Federation, which banned the promotion of homosexuality among children.
The meeting between Putin and Abe over the past year has been the fifth. Relations between countries are going up - each other is being pushed into their arms by a natural desire to create a counterbalance to China’s gain. Until now, the stumbling block for the new stage of cooperation has remained the territorial dispute over the ownership of the four Kuril Islands.
Today for Tokyo is also a kind of moment of truth. Japanese newspapers vie write that to stand up in opposition to Moscow today means to part with dreams of joint development of the disputed territories. The resolution of this issue is the cornerstone of the Japanese politics of all the ruling offices over the past half century, which means it is logical to assume that tricky Japanese diplomacy this time will not be led by Washington. 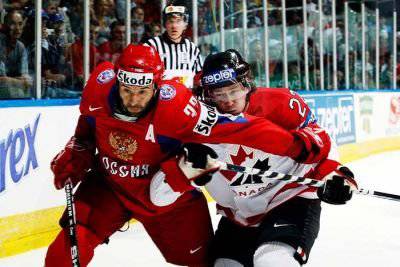 From the countries of the "seven" unconditionally supported the position of the United States only Canada. No, of course, there are cooling periods in the US-Canadian relations too. For example, just a couple of years ago, a conflict nearly broke out between neighbors over maritime borders in the Arctic Ocean. But today, Canada is in dire need of US support.

The fact is that the economy of the second largest country in the world is on the verge of a crisis. Now the working sector of Canada is losing several thousand jobs every month, which is quite significant for a country with 30 million. This is due to the fact that the Canadian economy is becoming less balanced due to the increase in oil production. At the same time, the government of the country in every way ignores the complexity of the situation. According to experts, it may happen that you have to go with an outstretched hand in the United States.

In general, it turns out that the European partners of Washington need Russia much more acutely than it might seem at first glance: Russian gas and the Russian market are a matter of survival for them.
The Japanese have now more than ever gotten close to embodying their national idea - the joint development of the northern territories (as the Kuril Islands are called in Tokyo).
As for real support, Washington can only get it from Canada.

Ctrl Enter
Noticed oshЫbku Highlight text and press. Ctrl + Enter
We are
How can Russia survive and win in the 21st century?Russia: the Moon, Mars and further everywhere ... Speeches of the participants of the Izborsky club in the corporation "Rosobschemash"
Military Reviewin Yandex News
Military Reviewin Google News
98 comments
Information
Dear reader, to leave comments on the publication, you must sign in.