March 20 2014
67
Recent events around Crimea have and will have a lot of consequences of a different nature. The accession of the Republic of Crimea and the city of Sevastopol to the Russian Federation, among other things, should affect the further fate of the Black Sea fleet. According to the Interfax news agency, the navy command intends to review the existing development plans of this operational-strategic association. 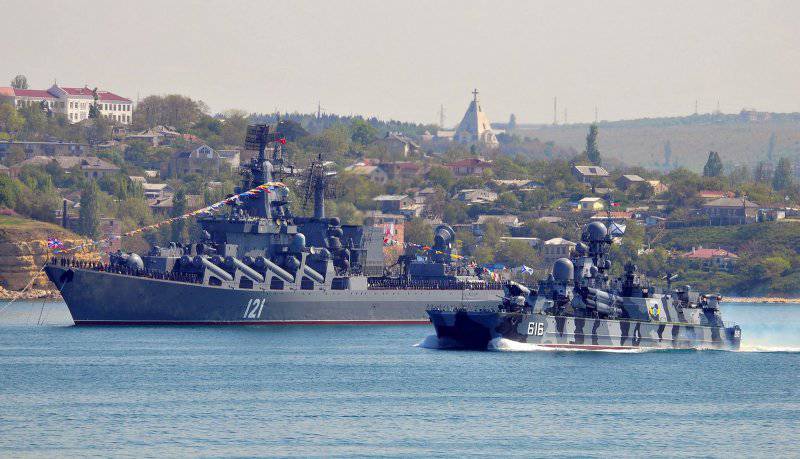 The Interfax source at the Navy Headquarters stated that the existing plans for the development of the Black Sea Fleet in connection with the latest events were suddenly outdated because they were created taking into account the realities of the recent past. The new situation in the region requires an urgent review of existing plans and make the necessary adjustments to them. All such work will be carried out in the near future.

According to the source agency Interfax, over the next few years, the appearance of the oldest Russian fleet will undergo major changes. The development of the Black Sea Fleet, despite its importance, has in recent years been essentially restrained by certain political factors. The absence of such barriers, in turn, will make it possible to significantly upgrade the Black Sea Fleet and thereby increase its combat capability.

According to the Interfax source at the Navy Headquarters, the modernization of the Black Sea Fleet will continue in the foreseeable future, in which new strategic tasks in its area of ​​responsibility will be taken into account. As for the locations, the main work on the modernization and renovation will be carried out in Sevastopol. It is supposed to improve all available infrastructure. Later it is planned to create a new repair base. Infrastructure construction in Novorossiysk will continue in accordance with current plans.

The increased attention of the Navy command to Sevastopol is understandable. Over the past three centuries, it was Sevastopol that was the main base of the Black Sea Fleet, but the current state of the infrastructure leaves much to be desired. After the collapse of the Soviet Union, the Sevastopol infrastructure was relatively extensively used, but never underwent major repairs. Because of this, it is now necessary to repair and update almost all existing facilities, as well as communications and communication routes.

In the context of upgrading the fleet infrastructure, it should also be noted the modernization of other facilities. Apparently, in the near future, numerous works will begin on the renewal of the energy system and civil infrastructure of Sevastopol and surrounding areas.

In Crimea there are several military airfields suitable for use aviation Black Sea Fleet. Two of them (Kacha and Gvardeiskoye) were until recently rented by Russia and since 2011 belong to the same air base. Over the past decades, the domestic military department has not been able to devote sufficient attention to these facilities, which is why they need to be repaired and updated. In the future, similar work can begin at other Crimean airfields, previously operated by the Ukrainian armed forces.

In the coming years, the Black Sea Fleet should receive several new ships and submarines. So, Kaliningrad shipbuilding plant “Yantar” should build six frigates of the project 11356Р. The lead ship "Admiral Grigorovich" was launched a few days ago, the other four frigates are at different stages of construction. Bookmark of the sixth frigate of the new type is planned for 2014 year. All six frigates of the new project should be transferred to the Black Sea Fleet before 2016-17.

The existing plans for the construction of new ships and submarines may not be sufficient to meet the requirements of the new time. For example, now Russia will have to perform the tasks of protecting the new border, which was previously monitored by Ukrainian structures. For this, among other things, will have to increase the grouping of ships and boats of the border service. In addition, you may need to strengthen the Black Sea Fleet at the expense of small ships and boats for various purposes.

From the words of the source agency Interfax in the General Staff of the Navy, it follows that the command of the fleet is only the beginning of work on studying the new situation in the Black Sea and has not yet developed new plans. Apparently, by now only general decisions concerning the main area of ​​work are ready. The main task in the context of the development of the Black Sea Fleet in the near future will be the renovation of the existing infrastructure. When the planned work will begin is not completely clear. Nevertheless, we can already say with confidence that over the next few years, the Russian Black Sea Fleet will be able to significantly increase its combat capability and obtain new opportunities corresponding to the new strategic objectives.