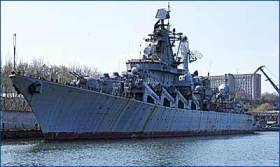 The unfinished Ukraine-launched missile cruiser, which has been stationed at the Nikolaev Communist Party’s 61 Shipbuilding Plant for many years, must be immediately sold without asking permission from Russia. Nikolai Romanchuk, the head of the Nikolaev regional state administration, said this, the Internet newspaper reportedNews N ".


“Today, the issue of selling the Ukraine cruiser becomes more relevant than ever. After what has happened, we don’t have to do anything to Russia and no one will consult with it. We have to find a buyer and sell the cruiser as soon as possible,” said the head of the region.

According to him, at present the state has no money for the completion of the cruiser and they are unlikely to appear in the near future. And the maintenance of the ship, according to Romanchuk, costs the budget over 6 million hryvnia per month.

As the correspondent of ARMS-TASS was informed in the Northern Design Bureau (SPKB), where the cruiser "Ukraine" (formerly "Admiral" was developed) Fleet Lobov "), any modernization of the cruiser by the criterion of" cost-effectiveness "today seems completely meaningless.

“Even if one imagines the presence of this ship in 95-percent readiness, as the Ukrainian side assures, even in this case, it is necessary to completely remove and discard previously installed equipment, which after 20 years of“ storage ”can hardly be suitable for operation” , - believes SPKB Deputy General Director Vyacheslav Senchurov.

"In the case of the sale of" Ukraine "on the cruiser, everything must be removed and redone, and, based on the criterion of" cost - efficiency, "this is more like" monkey labor ", he stressed.

The project of the cruiser was developed in SPKB. The ship was laid in the summer of 1984 of the year by order of the USSR Navy at the "Shipyard named after 61 of the Communard" in Nikolaev and was launched on August 11 of 1990 of the year. October 1 1993, he was withdrawn from the Russian Navy and became the property of Ukraine. A year later, due to lack of funding, the completion of the cruiser was discontinued. However, 17 February 1998, the President of Ukraine decided to complete the construction of the cruiser, after which the ship was completed, as the Ukrainian side claimed, by 95 percent.

The Russian Navy currently has three missile cruisers of this type in service: the Moskva, Marshal Ustinov and the Varyag.

Ctrl Enter
Noticed oshЫbku Highlight text and press. Ctrl + Enter
We are
"Admiral of the Fleet of the Soviet Union Gorshkov" of the 22350 project - transition from St. Petersburg to Kronstadt
Military Reviewin Yandex News
Military Reviewin Google News
125 comments
Information
Dear reader, to leave comments on the publication, you must sign in.