Syrian US Quirk: a move against Russia?

March 20 2014
216
On Tuesday this week, Western media, citing the statement by the US special envoy for Syria Daniel Rubinstein, reported that Washington was suspending diplomatic relations with Damascus. The work on the territory of the USA of the Syrian embassy, ​​as well as of the consulates, stops. The press notes that employees at embassies and consulates in Troy (Michigan) and Houston (Texas) have already received orders to leave American territory. 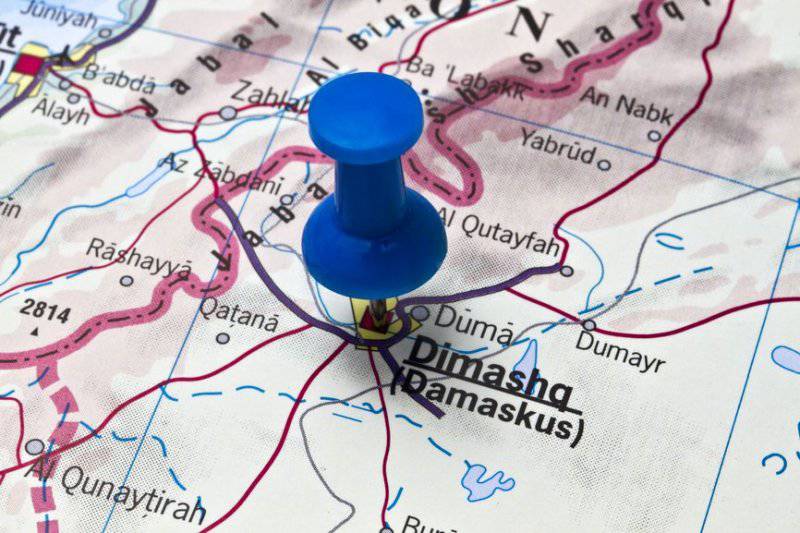 RIA News" reports that the official representative of the UN Secretary-General, Stefan Douzarrik, called the suspension of the work of the American embassy in Syria and the Syrian diplomatic missions in the US "obviously a bilateral step."

Previously D. Rubinstein said: "We decided that it is unacceptable that those who were appointed by the regime (President Bashar al-Assad) conduct diplomatic and consular activities in the United States."

According to the Associated Press, citing the presidential administration, Rubinstein explained that diplomatic and consular activities for people appointed by the “regime” are “unacceptable” in the United States because the politician (Assad) I refuse to resign and is responsible "for the atrocities against the Syrian citizens."

It is curious that this very Rubinstein was appointed to the post of special envoy for Syria ... on Monday. It is also curious that before he worked not just anywhere, but in the State Department's intelligence and research department. In a word - a very interesting appointment and a very hasty statement. As if someone is in a hurry somewhere ...

Apparently, in order to somewhat soften the statements of this appointee, the State Department official Jen Psaki made a public statement. She explained to the world community that the suspension of Syria’s diplomatic missions in the United States does not mean a break in relations with Damascus. Her words brought "Vesti" with reference to ITAR-TASS.

Psaki clarified that Syrian diplomats and their family members must leave the United States by March 31.

Well, if the State Department demanded, there is no doubt: Syrian diplomats will fly away from the United States. What does all of this mean? Such actions to expel ambassadors and consuls usually precede the real war between states. I do not intend to Washington bombed Syria? Long harnessed, right on the Russian proverb, and now quickly go? But why now?

It can be assumed that the fault is Crimean geopolitical история and the imposition of a veto on the western resolution on the “illegality” of the referendum, which caused an attack of real hysteria in Mrs. Samantha Power at the UN Security Council, where she lightly spit jacket jacket to Comrade Churkin and even, as they say, tried to bite him. The US and the EU, and even Japan, warned Russia about the "integrity" of Ukraine, but the Moscow Bear did not listen to the voices of the democratic mind. Scared West Russian and terrible sanctions. But it did not work either. Well, a disobedient child, Russia should pay for its offenses.

Is the project on infringement of the interests of Russia behind the “diplomatic” actions of the United States with respect to Syria not seen as a response to the “Crimean crisis”? It may even be. Washington is constantly lying, constantly applying double standards, and therefore you need to be alert.

What could be the American-Union project? But how.

First of all - the accelerated democratic tomagawk entry into the territory of the war-torn Syria. Next - the creation of a buffer zone and no-fly zone. This is the fastest option for splitting off a significant piece of Syrian territory. And here it is - the hordes of peacekeepers, NATO mixed with the UN, almost at the head of McCain himself (Ban Ki-moon will be his political commander).

After establishing a “law and order”, a separate state is proclaimed in a torn-off territory, a temporary border is set up, checkpoints are built, a thorn is pulled, and then presidential elections are held in an emergency order, and a US protegee sits in the chair, financially and informationally supported by well-known gas - and the Gulf oil trading monarchies.

No referendum is required to recognize the independence of a new state entity. This is not Crimea, it is more like the "Republic of Kosovo" sample 2008-th year. Only this time, given the historic turn in the Crimea, the recognition of the new state by the “world community”, including the corresponding gathering in the UN, will occur much faster. Dates will be just a record.

After these hasty democratic procedures, obese and rich Qatar will not hesitate a minute to start building a gas pipeline through the free democratised part of Syria. The pipe will go to Turkey and further directly to the EU countries. Qatar has long dreamed of this; The war in Syria is a poorly executed "sbycha" of this dream.

The realization of the Qatari dream will involve something unpleasant for Moscow, namely, the long-awaited diversification by the European Union of gas purchases. This means, in addition to the loss of part of the commodity market by Russia, and the western fat cross on the "South Stream". The blocking tool will be, let's say, the well-known EU Third Energy Package.

The introduction of powerful financial sanctions against Russia, approved by all interested parties, will also arrive in time. They will be used according to the Iranian scenario - that is, they will prohibit Russia from trading in minerals on international dollar grounds. The objections of Germany and several other Western European countries from the United States will receive another “factor” from the expressive Victoria Nuland or from someone else.

By the way, the other day Condoleezza Rice, now teaching at Stanford, lucidly told how, in her opinion, America should do with Russia: “Moscow is vulnerable to pressure. Now is not 1968 a year, and Russia is not the Soviet Union. Russians need foreign investment; oligarchs love to travel to paris and london, and their bank accounts abroad are full of capital acquired unrighteously; the syndicate ruling Russia does not tolerate a decline in oil prices, nor does the Kremlin budget, which subsidizes the layers supporting Putin. The abundance of oil and gas in North America will soon surpass Russia's capabilities. ” The White House must therefore unblock petroleum applications and allow Keystone pipeline from Canada to the United States. Well, let Europe find itself other suppliers of oil and gas and build pipelines itself bypassing Russia.

This is a university “fac” for the EU. Do not interfere, they say, with the Europeans, to make the USA its policy and tame the Russians.

And Iran, which at the time of applying the strategy described above, will be prudently freed from sanctions, will simply flood the world market with its high-quality oil.

As a result, Russia, long and hopelessly sitting on an export commodity needle, will receive: a collapse of raw materials budget-forming companies, a catastrophic fall in the federal budget, wage arrears, hyperinflation, an economic and social crisis, accompanied by a massive move of oligarchs to Australia, New Zealand (where rumor has it that BA Berezovsky is living and getting rich) or his favorite Britain. The “fifth column” hydra will raise all its heads, who will say in chorus: “We have warned you ...”

Well, those regions of Ukraine who wish to hold their own “illegal” referendums after the Crimea will think ten times: is it worth it to join such Russia? Wouldn't it be right to put up with and go to the EU - that is, embrace one who is stronger and more cunning, and who is smiling for uncle Sam?

It may well be that such an “apocalyptic” scenario has already been developed by devilish strategists from Washington, who think exclusively in the spirit of the Cold War. The world gendarme simply does not know how to think otherwise, nor is he capable. It is for this reason that the European missile defense system (yeah, the one that “against Iran”) will most likely be built at a pace of allegro ...

And a few more words in conclusion. The scenario described above may not seem so fantastic if you know what the leader of the National Coalition of Syrian opposition and revolutionary forces Ahmed al-Jarba said about the other day. This gentleman called the West just to introduce a no-fly zone over Syria. At a press conference in the European Parliament in Brussels, reports ITAR-TASS, he said: “If a no-fly zone is established, we will be able to fully ensure victory over the troops of the Assad regime.”

It is likely that this is a surprisingly timely statement (after all, Jarba spoke a little earlier than Rubinstein) was made under dictation.

Ctrl Enter
Noticed oshЫbku Highlight text and press. Ctrl + Enter
We are
Results of the week. “And the Crimea of ​​the Fatherland is sweet and pleasant for us!”Syria: Americans scare themselves, and Asma Asad buys chairs
Military Reviewin Yandex News
Military Reviewin Google News
216 comments
Information
Dear reader, to leave comments on the publication, you must sign in.