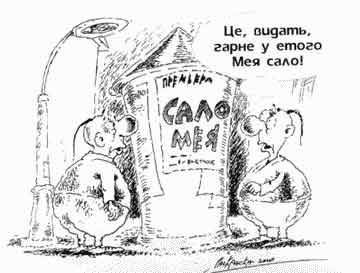 My relative, Russian, 30 years ago, married to a Ukrainian and living now in Kiev, sent me an SMS asking: what do I think about Ukrainophobia?


Frankly, this question put me in a dead end, and I did not immediately find an answer. After some meditations, I write in response: “... Ukrainophobia” (ugh, what a word they came up with!) As a word and as a concept does not exist either in the Russian lexicon or in the Russian public consciousness. Unlike in the whole world, the well-known and widespread concept of “Russophobia”.

In fact, in my mind for 60 years of life lived in this country, no negative emotions have been formed towards Ukraine and the people living in it. Since childhood, for me, "Nenka Ukraine" is a sweet, gentle, gentle land with a warm climate, with a good-natured population; fields, gardens, white huts, beautiful songs ... And, of course, Ilya of Murom with Alyosha Popovich and Dobrynia Nikitich. And Kiev is the mother of Russian cities ... The system of forming public consciousness in my country worked in this direction. (It seems to me, the direction was right - to form a friendly attitude to each other of numerous nations and nationalities living in the territory of the Soviet Union.) And during military service, my best friend and comrade was a Ukrainian.

After the collapse of the Soviet Union, little has changed in the public consciousness of the Russians towards Ukraine. The fact that the seeds of nationalism and even chauvinism sprouted in the fertile soil of Ukraine and gave abundant seedlings (by the way, it has very little in common with the modern civilized understanding of such a term as “patriotism”), as if in a low voice ashamed of this phenomenon. And about the fact that in Chechnya, Abkhazia and Georgia, Ukrainian specialists and militants fought against Russia, wrote and spoke almost half-whisper. Officials of Russia kept silence at all, as if this fact was not at all. And at the same time my relatives accuse Russians (and me, it turns out) of “Ukrainophobia”. And also in the oppression of the Ukrainian people, the “famine” (damn you, my God!) And the annexation of the territories.

How did it happen that in some 25 years, so much shit was piled on the heads of Ukrainian citizens that the Russians became enemies for them? Who of Russians oppressed and oppressed Ukrainians during these last 25 years?

Maybe it happened before? And when before? How many of you remember this "before"? Are there any witnesses?

I now remember how people lived in Ukraine (or in any other of the former Soviet republics) 35 years ago, and how - as opposed to - in central Russia or Siberia. I have been there and there. Have you ever been?

It seems to me that the fault is the standard of living of the population. A hungry person in any country becomes easily suggestible and, as a rule, begins to suffer from hyperopia. Such a person can easily make out the enemy beyond the horizon (you only need to correctly indicate the direction) and will not notice that someone's hand is fumbling in his pocket. And he will not understand that the enemy beyond the horizon is a mirage, a hungry hallucination, and someone else’s hand in his pocket clearly belongs to someone who is near.

Well, well fed on the barricades will not climb. Will sit at home, store bins. Is that he is furious with fat - there are those.

If we assume that the cause of the forcing of anti-Russian sentiment was the difficult economic legacy inherited by Ukraine from the Soviet Union, then I'm sorry, I can not recognize this blame for the Russians in general, or for myself personally in particular. The economy of the Soviet Union (and the state after it) was destroyed not only by the Russians. It was quite even an international group (I will say very gently) of economically semi-literate, but painfully ambitious people, found themselves in the levers of managing the country's economy in the second half of the eighties of the last century. The Russians, perhaps, were guilty only that by subsidizing the Soviet republics to the detriment of the Russian Federation for several decades, weaned the inhabitants of these republics to work and earn a living. Except, perhaps, for industrial clusters of eastern Ukraine and Belarus. Probably because today a huge number of people from the so-called "near abroad" work in Russia and take the money they earned to their home, refreshing the age-old migration routes of Russia's national income from the center to the periphery.

By the way, it was the Russian who, to put it mildly, was a Russian who said something like in 91: “Take as much independence as you can eat!” And they took it. And a state appeared on the world map with the name of Ukraine with today's borders. And they began to eat. It is here, in my opinion, that the main root of evil must be sought.

There is something started, but not all, but only some. Mostly local Ukrainian gangsters. Sorry, effective managers who quickly became oligarchs. The very ones in whose pockets ... Again, sorry, on whose accounts in the largest European banks the same aggregate gross national product of Ukraine is located, which would have to develop the economy, feed the country's population and maintain a strong, modern and respected army in the world.

It seems to me that this most cumulative gross national oligarch is the owner of that hand, which points far-sighted Ukrainians at the enemy beyond the horizon east of Kiev. His second hand at this time is fumbling in the pockets of citizens, including my relatives living in a country that bears such a glorious and tender name - Ukraine. In a country where apple trees and cherries are blooming in the gardens near the trill of a nightingale. In a country where "The bluest in the world / my Black Sea, / my Black Sea ..."

But this, I think, is only one side of the Ukrainian medal. Although it would be more relevant and more accurate to say, the badges of the ground belt of the attack aircraft UNA-UNSO. There is a second side, usually hidden from prying eyes. This is the complex of the vanquished.

After all, it is well known that not all Ukrainians are fighting shoulder to shoulder with the Russian and many other nations of the world against German fascism. Quite a few Ukrainians fought on the other side. These are the vanquished, but not convinced, who harbor a grudge against fate and the winners, having waited in the wings, crawled out of seemingly nothingness and declared themselves. And it turned out that there are not one or two, but hundreds, maybe even thousands.

But what is strange and not clear is: how have they managed to convince by now quite a significant part of the population of Ukraine, millions of seemingly sensible people that this pathetic bunch of fascists are the heroes of their country, that they are the true patriots of their homeland , and Russian-the occupiers? After all, more recently, in the elections to the Verkhovna Rada 26 March 2006, the UNA-UNSO scored only a little more than 16000 votes? Moreover, they managed to convince not only "real" Ukrainians, but even many ethnic Russians living in Ukraine? We ask my relative: “Well, you are Russian, then what are you doing there ?!” And she answers something like: “Yes, I am Russian! And because of that, I was even more bitterly aware of how we, the Russians, were waving Ukrainians with famines and other various bad deeds ... ”

"Tolerance"? "Liberalism"? If this is the reason, then is it not time to declare these words unprintable and enter into the dictionary of foul language? And finally, remember that the press (and for our time, read: all the media) was considered by Leo Tolstoy to be the most destructive force of civil society, which should be kept tightly under control.

However, it seems to me that every medal has a third party. This is the loss by many people, especially modern youth, of such qualities of character, which until recently were considered one of the main features of a civilized person’s character, such as honor, dignity, and decency. Many of the thugs who were raging on the “Maidans” of Ukraine came there not so much at the call of their hearts as for the opportunity to earn extra money for 500 hryvnia and “for a portion of adrenaline. It's so much fun - give Moskal on the head with a cudgel! And you will not be imprisoned for this; moreover, they will even declare a hero. And they will give money. And do not think, but what does the one who gives this money want to get in the end for his money? “The hand of the giver will not fail! The hand of the taker will not fall away! ”It seems that basically this formula determines the consciousness of the crowd screaming in the stadium:“ Moskal on knives! ”

But it would seem that historical the experience of past years and centuries should give people wisdom. And gives. True, not everyone. And only to those people who study history not from textbooks written by opportunists prone to schizophrenia.

If you mix red and black, it turns brown. This is an alarming sign. And it would not be superfluous to know the new Ukrainian brown that in the recent history of Europe there were not only victorious marches of “brown shirts”, but also “the night of long knives”. It is possible that this night is not far off. And I would be very sad if the blame for that night would again be placed on Russia.