"We hit the death row" 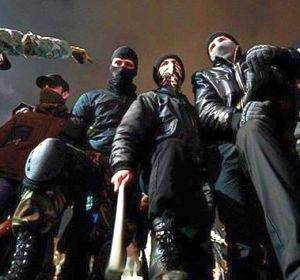 Residents of Western Ukraine are seeking political asylum in Russia. The governor of the Tyumen region, Vladimir Yakushev, received a letter, from which his hair stood on end: "People come to us with machine guns and bury them in a garbage dump."


Recently, regional officials of the Tyumen region received a terrible letter from a family living in the west of the neighboring country. People are asking for political asylum. It’s hard to believe what they are talking about - it seems that the world has returned 70 years ago and the Nazis are brutal around.

Here is the full text of the letter:

“Dear Mr. Governor, please read this letter and help us if possible. We live in the Rivne region of Western Ukraine. My husband is an ethnic Russian, the chairman of the regional organization “Party of Regions”, and assistant-consultant to the deputy of the Verkhovna Rada of the “Party of Regions”. I'm an elementary school teacher. We have three children. The eldest son works in law enforcement, the middle one - serves in the Armed Forces, the youngest daughter works in the ICC "Artek".

We are appealing to you with a desperate request for political asylum. By sending this letter, we put an end to the death sentence imposed on us by local Bandera gangs under the flags of the Right Sector and Freedom.

Relatives of the Berkut security service officers and the police were threatened, pogroms of houses and apartments of members of the Party of Regions are going on, and even the participants of World War II and representatives of the Soviet intelligentsia are gathering files, starting with the descendants of the first representatives of self-government bodies in Western Ukraine. All this is done for further reprisals and, judging by the slogans, for indicative "executions" called "people's lustration."

Our family is constantly threatened, and after the raid of the “black hundreds” we are forced to hide with our friends, avoiding death. We have already been robbed twice, beaten, “bought” a car from us at gunpoint, and the telephone threats merged into one continuous call. People do not come to us during the day, come to us at night with machine guns. About such as we do not write news, but quietly buried in the garbage.

The anti-constitutional coups committed by the fascist thugs in Western Ukraine led to the complete seizure of government bodies, departments, law enforcement agencies and the complete loss of any control by the legitimate authorities over the ongoing processes. Oleksandr Muzychko (Sashko Bily) overlaid the businessmen Rivne and even state bodies, including law enforcement, with a levy.

New bodies of self-government, calling themselves "people's rades" with the help of militants from the "people's self-defense", are ruled by the courts of Lynch over all Russian-speaking, dissident.

Looting and beating of peaceful people flourishes. Possessing information about the addresses and telephone numbers of citizens, the “black hundreds” compile death lists and begin their systematic pursuit, destroying property, beating and humiliating those who do not support the fascist regime and do not proclaim Bandera slogans. This is a repetition of the fifties (peak of rampant Bandera underground in the postwar years of the twentieth century - approx. Ed.).

In the fifties, my grandmother lost three sons at once in a few days. They were killed by Bandera. One was shot in front of her eyes near the house, another was taken away and he went missing, and the third one, which was carved with ramrod, with her eyes punctured, she dug out with her own hands from a half-poured well on a farm. I do not want my children to have such a fate, I am tired of living, shying away from every knock on the door or a phone call, I am tired of being unable to change anything, so tired that I want to howl.

I assure you that we can become worthy members of Russian society. My family and I do not want to live in a country that has slipped to the frank preaching of fascism and racism. ”

At a meeting of the government of the Tyumen region, Governor Vladimir Yakushev was informed that the family from Rovno, who had asked for political asylum on Tyumen land, would be resettled under the program “Compatriots”.

Ctrl Enter
Noticed oshЫbku Highlight text and press. Ctrl + Enter
We are
Acting head of the Crimea: The size of the theft of the main budget-forming enterprises such that hair stand on end
Military Reviewin Yandex News
Military Reviewin Google News
111 comments
Information
Dear reader, to leave comments on the publication, you must sign in.