March 19 2014
29
Rare specimens weapons in the Soviet Union were created in an initiative order. The experimental machine AO-46 is one of such samples. In 1969, an employee of the well-known enterprise TsNIItochmash (Klimovsk town) Pyotr Andreyevich Tkachev got excited about the idea of ​​creating a prototype of a small-sized machine gun. This machine was created under a promising cartridge 5,45x39 mm, which is under development, this cartridge was considered low pulse. The model of weapons proposed by the Weaver was given the designation AO-46 (automatic weapons, 46 is the development number of small arms in TsNIItochmash). Despite the fact that the new machine was created under the automatic cartridge 5,45x39 mm, it had a very small mass. The weight of AO-46 was only 2 kg, so it could rightly be called ultralight.


This small-sized ultralight machine gun was considered as a personal defense weapon for servicemen of the so-called “second echelon”, that is, those who do not directly participate in the firing contact with the enemy. AO-46 could become a regular weapon of Soviet tank crews, missilemen, artillerymen, various auxiliary workers. The main requirements for such a weapon include compactness, the ability to open fire very quickly, and defeat targets at a distance of up to 200 meters. At the same time, the machine gun should not have prevented the soldier from carrying out his basic functions and remain easily accessible in any position.

The compact, shortened machine gun was originally designed for the promising cartridge 13МЖВ - 5,45х39 mm. Peter Tkachev developed it according to the bullpup scheme. This development was distinguished from traditional automata by a short barrel, a metal butt, which was piled up on the top of the receiver and the use of a magazine receiver as a pistol grip for fire control. Also an interesting feature of this machine was the absence of a vapor device. To maximize the simplification of the weapon design, the gases acted on the bolt carrier frame when they were withdrawn not from the barrel, but directly from the muzzle of the flame arrester. At the same time, it was possible to fire from AO-46 both in bursts and single shots. For appearance similarity with the Israeli submachine gun, he even received the name "Soviet ultrasound."

Even at the stage of preliminary design, the designer paid great attention to the ballistics of the new 5,45-mm cartridge. Tkachev noticed that during the movement of a bullet of this cartridge along the barrel bore its speed increases very quickly. Intra-ballistic calculations allowed to establish that already at a distance of half the length of the barrel the speed of the bullet exceeds 700 m / s. This allowed to seriously reduce the barrel. Even if the trunk was shortened by half at the exit, it was possible to obtain good external ballistic characteristics. Calculations and studies have shown that reducing the barrel length from 415 mm to 210 mm leads to a decrease in bullet speed of only 16% (from 880 m / s to 735 m / s) when using a new 5,45-mm cartridge.

Despite the fact that the initial speed of the bullet allowed to count on the sufficient effectiveness of such weapons, another problem appeared. When firing from a weapon with such a short barrel, a strong muzzle flame arose, which unmasked the shooter; in addition, the magnitude of the muzzle pressure had a traumatic effect on its eardrums. The specially developed muzzle attachment, which was designed as an expansion chamber of a sufficiently large volume, helped to eliminate these phenomena. With this nozzle, exhaust gases are first discharged from it through a series of side openings in the front of the barrel of the machine, and then from the muzzle of the barrel. At the same time, this nozzle is used in the automation of weapons, playing the role of the gas chamber of the vapor system.

The next step of the designer was the search for simpler solutions in comparison with the existing AK-74 machine gun. For this, he eliminated the pistol grip, its functions went to the detachable store. In order for the new machine to be conveniently held by such a “handle”, Tkachev significantly increased the slope of the store. Taking into account the alleged specifics of the use of these weapons, including the need for hidden wearing the machine during special operations, the designer went on reducing the capacity of the store by 2 times - to 15 cartridges. 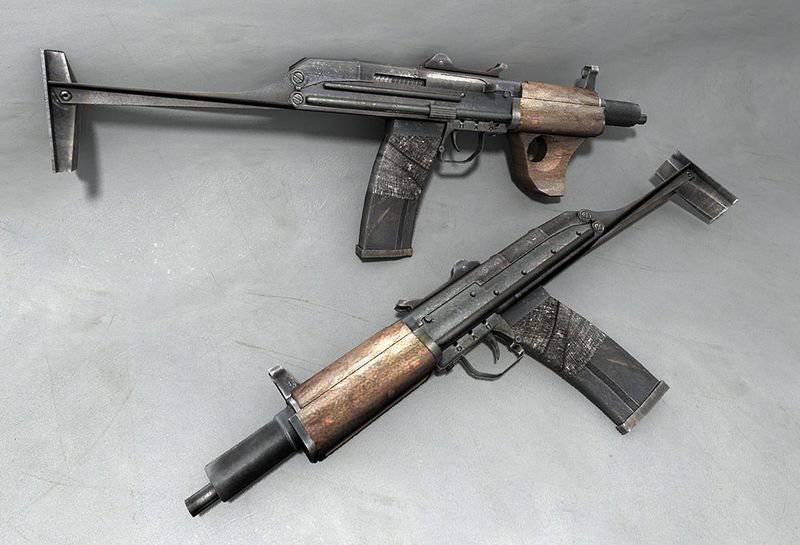 The original decision to use the store as a pistol grip had its consequences. In order to reduce its width, the cartridges in the store were placed with a very large slope. The increase in slope led to a deterioration in the efficiency of the supply of cartridges. Therefore, the decision to reduce the capacity of the store pursued not only functional goals, but also purely technical ones. The designer managed to ensure reliable operation of the machine only with the 15 magazine for cartridges.

Locking the bore of the AO-46 machine gun was tough, it was made light (0,07 kg) with a butterfly valve having two locking protrusions. The rifle was equipped with a firing-type firing mechanism with a long firing stroke - 80 mm. The long stroke of the striker contributed to an increase in the dwell time of the moving parts of the machine in the front position, which, in turn, led to a decrease in dispersion and rate of fire.

AO-46 had sights, which consisted of a flip (two positions) pillar and front sight. The shoulder rest was made of metal, if necessary, it is easily folded on top of the AO-46. In this position it could be firmly fixed with a special latch, which was located in the body of the base of the sight. The translator of fire modes on this prototype machine also served as a fuse. He was a lever and had three fixed positions (shooting single bullets, automatic fire and fuse). The fire interpreter was located on the right side of the receiver directly above the trigger. 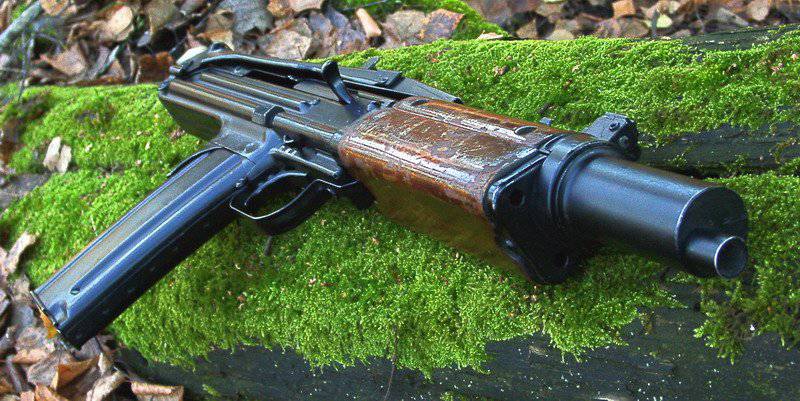 Most of the details of the experimental small-caliber machine gun AO-46, including its receiver cover, the receiver itself and the shoulder support parts were made from sheet steel by stamping. To protect the shooter’s hands from burns, the front of the receiver cover and the metal parts of the forearm were covered with special pads made of veneer. In general, this prototype weapon favorably differed non-standard, original design design of almost all of its parts and assemblies. Despite this, AO-46 has never been mass-produced.

After the new machine gun was shown to the representatives of the Grau, they opened a new competitive theme for the creation of a similar machine gun. At the same time, the Ministry of Defense gave this topic a very unusual name - “Modern”. As part of the work on this topic, Soviet designers proposed a number of interesting prototypes of shortened automata. The most elegant of them looked like an automaton I. Stechkin, who also distinguished the original design solutions. However, preference was given to the Izhevsk development of the AKS-74U, this automatic machine was put into service in the 1979 year.