Why in the West again did not understand Russia: they have forgotten how to be a nation 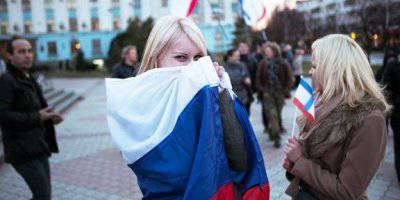 The results of the Crimean referendum became one of the central themes for the world press. Just as phenomenal voter turnout is more than 83%, so the result is 96,77% looks incredible to many in the West. Comparisons have already begun with North Korea, with votes in the social camp of the USSR. Everything is shocked and Russia's real readiness to annex the Crimea.


Indeed, many in the West cannot believe that such unanimity is possible, and they simply do not understand the motivation of all the participants. Why? Let's look at this question not from the standpoint of the fact that these are Western Russophobes, as always against Russia. There is a much more interesting phenomenon. They really cannot believe, because unity is not provided for in the paradigm of the service state. In this paradigm, the president, the government and the government in general are only technical figures. Which by definition cannot be leaders and spokesmen of the aspirations of a nation, as it was in the West itself during the times of Roosevelt, de Gaulle and Adenauer. Just like technological democracy, where ideal choices are choices with the result 49 \ 51% or 33 \ 33 \ 33%, does not imply any unity: on the contrary, it should reflect the division of society into many groups, and the more, the more it is better.

Why? Because unity implies the presence of some kind of idea that the whole nation shares. But nations in the former sense, like super-ideas, are not provided for in this paradigm. Because - and this is key - such a nation has values ​​more important than the personal well-being of everyone. And this is dangerous. After all, only a people united by a common idea, and at the same time an intangible idea, and considering their state not a certain territory with hired managerial officials, but historical subject, able to withstand the project of a neoliberal globalized world, a world without sovereignty. That is why - mind you - opponents accuse both Putin and the Russians of historical backwardness, of what they supposedly think in terms of the past. Whereas, in fact, the opposite is true - against the background of globalization progress, Russia risked taking a step towards a different future. Or at least I tried - after all, success here is not guaranteed, and the model of this future is very vague. But the step has been taken.

You can pay attention that the domestic liberal press in the last couple of weeks has been asking the same pessimistic question for it - why do the Russians support all this? This Putin, this Crimea, this harsh rhetoric towards the West, although it leads us to international isolation. And the liberals have no doubt that they support it - it is impossible, after all, to deny the obvious. The people really want to see Russia as a strong industrial empire with a historic mission, and not a territory that will be allowed to exist on the outskirts of the club of white people, provided that it recognizes itself as a backward and inferior apprentice. The Russians did not recognize themselves as losers in the Cold War, which means they consider themselves eligible for their choice and their path.

Why is this unity so incomprehensible to someone? Because it really is based on categories of another reality. And the phrase attributed to Merkel, that Putin “lost touch with reality,” very accurately reflects this. Moreover, with the reality that the supporters of a unipolar “new world order” have been offering Russia since the collapse of the USSR, the majority of Russian citizens do not want any connection either. Moreover, it was not Russia who began the current confrontation, on the contrary, first Gorbachev, and then Putin all the time offered the Europeans a project of a “common European home”. However, neither the naive ideas of Mikhail Sergeyevich, nor the pragmatic variants of Vladimir Vladimirovich the atlantist West did not interest. In response, we received a NATO expansion to the east, the Eastern Partnership, unabashedly aiming to tear as far as possible from Russia the neighboring, historically connected countries, the former Soviet republics, the insane Russophobic rhetoric of the Western media, which did not happen even during the Cold War (and noted the most adequate Western analysts, this hysteria did nothing to promote the propaganda of liberal European values, but on the contrary, only pushed the Russians away from them).

Finally, they decided to “take Ukraine”. Did these “designers” count on success? Full Indeed, in the logic of technological and commercial decision-making, Russia should not resist, risking the economy, the welfare of citizens, the image of the world, and so on. And citizens should not resist because they are more expensive.

Yes, Putin's position, the position of political and business elites, military resources, the degree of readiness for radical changes in the economy and the possible reorientation of Russia to the East in the event of a real new Cold War with the West matters. But the outcome of the current situation with Ukraine, and in general the subsequent fate of Russia, its position in the world and the very geopolitical structure of this world now depend in many respects also on the readiness of all Russia and the Russians to decide what reality they want to live in and readiness to prove what values for them are really important. And I think, external observers still have a lot to be surprised.

Ctrl Enter
Noticed oshЫbku Highlight text and press. Ctrl + Enter
We are
A great interview with Sergey Lavrov: about Ukraine, Obama and IranWhat you didn't want to know about England
Military Reviewin Yandex News
Military Reviewin Google News
140 comments
Information
Dear reader, to leave comments on the publication, you must sign in.