A. Wasserman: “The Russian Federation is just one of many parts of Russia” 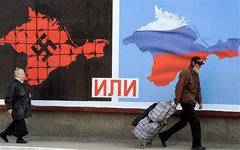 
So, Crimeans made their choice. This is important, all other reservations, reflections and tantrums can be left out of the brackets.

It must be said that the inhabitants of the peninsula made their choice in a very difficult situation, when the Internet was simply teeming with gloomy predictions of the “death of the Crimea”, which, it turns out, Russia is not needed at all, because (a sample of logic!) Russia has its own Sochi.

The fact that Crimea is a de facto another Russian region, separated only by some kind of misunderstanding from the other state border, was also clear in the most "cloudless" periods of Russian-Ukrainian relations.

Yes, in fact, the Crimea was Russia until 1954, when Nikita Sergeevich Khrushchev transferred this land to the subordination of the union republic. It seems to be purely economic considerations, although there are still many versions on this subject.

But walked - and that's enough. It's time to go home.

A well-known Russian-Ukrainian political analyst and publicist Anatoly Wasserman presented his view of the future of Crimea as part of Russia to the KM.RU portal:

- Events in the Crimea show that in the well-known formula of a variety of small-power chauvinists “suitcase - station - Russia” one can do without the first two points.

The unity of Russia will be recreated, that I, as a native of New Russia, are very happy

Crimea without the help of railway stations and luggage was not just in Russia (it was in Russia all this time, starting with 1783), but specifically in the Russian Federation. The clause laid by the legislation of the Russian Federation that a country can be called simply Russia is, in general, a rather serious application for the future.

Now the Russian Federation - although the largest, but only one of the many parts of Russia, and the events in the Crimea - is, in fact, the first step of the global process, leading to the fact that the reservation made in the law will sooner or later become a reality. That is, the unity of Russia will be recreated, that personally I, as a native of Novorossia, which Ukraine occupied in 1918, with the help of the Germans, are very happy.

Now in the American means of mass agitation and disinformation, they very vigorously anticipate "the speedy destruction of the Crimea" and "the prosperity of Ukraine", which will no longer have to subsidize this peninsula. But reality itself tells us that now all the Russian regions of Ukraine are actually donors for Galicia, as well as for almost half of Kiev seized by Galicia; that all budget Ukrainian accounting is built in such a way as to disguise this very obvious fact by dividing the financial flows into many individual points and vigorous advertising of only some of them.

Yes, thanks to the mass propaganda in the mass consciousness of people in Ukraine, the idea that the Donbass, Slobozhanshchina, Novorossia, and the Crimea really are the regions that are unprofitable and subsidized really exists.

Well, now Ukraine has to make sure that in reality everything is just the opposite. And when it becomes impossible to mask it, when the speed of raising the well-being of the Crimea, freed from the Galician robberies, becomes obvious to everyone - then, I think, even the Ukrainian oligarchs, now appointed gaugers of several Russian regions, will realize that they are still much cheaper to “pay tribute Moscow than Kiev.

Ctrl Enter
Noticed oshЫbku Highlight text and press. Ctrl + Enter
We are
About Stalin and KhrushchevWhat you didn't want to know about England
Military Reviewin Yandex News
Military Reviewin Google News
106 comments
Information
Dear reader, to leave comments on the publication, you must sign in.