March 19 2014
0
Last Friday, 14 March at a Taiwanese shipyard of Lung Teh Shipbuilding Co. in the city of Suao held a solemn ceremony, opening a new page in stories Naval Forces of the Republic of China. The baptism of the head corvette of the Hsun Hai project took place in one of the shops of the shipbuilding enterprise. High hopes are placed on the ships of the new project. The Taiwanese press has already called them "aircraft carrier killers." 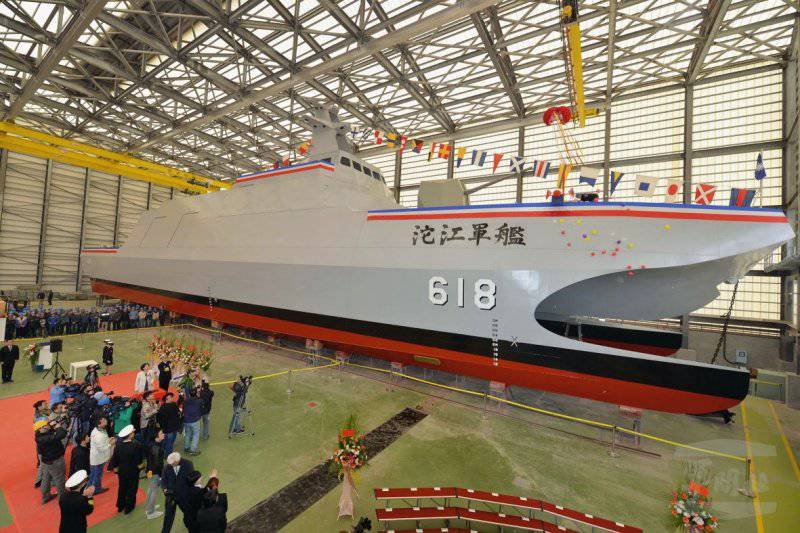 The lead ship of the Hsun Hai project was named PGG 618 Tuojiang (the “Tojian” is a river in China, a tributary of the Yangtze). The new corvette is not the first ship of the Navy of Taiwan with that name. The Corvette of the new project was named in honor of the RS 104 Tuojiang anti-submarine ship, famous for participating in a battle near Matsu Island. In early September 1958, the sailors of the Republic of China entered into battle with the superior forces of the Navy of the People’s Liberation Army of China. RS 104 Tuojiang received serious damage and was later written off.

Shipbuilding company Lung Teh Shipbuilding Co. has extensive experience in the construction of boats and small vessels. In accordance with the contract signed in May 2012 of the year, the staff of this organization began building a new class of equipment. The construction of the head corvette of the Hsun Hai project was launched in early November 2012. The official bookmark ceremony took place only at the end of March 2013. It was previously claimed that the lead ship PGG 618 Tuojiang will be transferred to the naval forces in November 2014. However, some difficulties in construction affected the timing. Currently, the delivery of the ship can only occur early next year.

The Hsun Hai Corvette Project was created at the Naval Shipbuilding Center (Kaohsiung). The aim of the new project was the construction of a series of new corvettes with a displacement of 500-1000 tons, which will be able to perform various tasks of patrolling the waters and destroying various types of targets. The hull of new ships has several characteristics. It is proposed to build Hsun Hai corvettes by catamaran scheme. Ship hulls should be built from aluminum and its alloys. With the help of these technical solutions, it will be possible to reduce the weight of the structure, as well as to ensure high driving performance. In the foreign press, the corvette PGG 618 Tuojiang is often referred to as the “stealth ship.” This definition appeared due to the characteristic appearance of the corvette. In accordance with the latest trends in military shipbuilding, hull and superstructure contours are formed by several straight surfaces connected to each other at different angles. 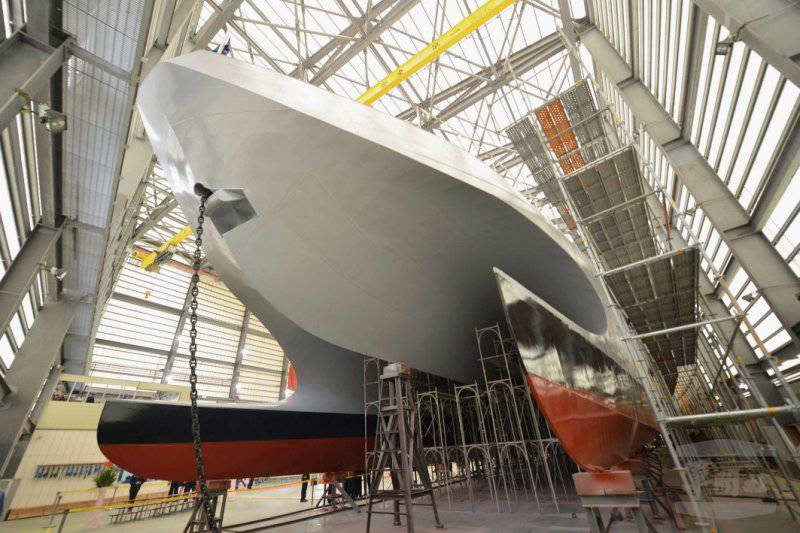 The head project corvette, recently named, has a standard displacement of 449 tons. Maximum displacement - 600 tons. The length of the ship 60,4 meters, width - 14 m. It is noteworthy that the head ship of the project Hsun Hai will be less than the next. According to reports, the following corvettes, catamarans of the Taiwanese Navy will have a displacement of up to 900-1000 tons and the corresponding dimensions. The construction of the lead ship of the series cost 890 million Taiwan dollars to the treasury of the Republic of China - just over 30 million dollars.

The lead ship of the project Hsun Hai received a diesel power plant. The systems used, as well as the catamaran scheme, should provide high performance for the PGG 618 Tuojiang corvette. The maximum stroke speed is declared at the level of 38 nodes. Sailing range - up to 2000 miles. The crew of the ship will consist of a 41 person.

Corvette PGG 618 Tuojiang is supposed to be equipped with a sufficiently powerful armament complex. To destroy surface targets, it must carry eight anti-ship missiles Hsiung Feng II and Hsiung Feng III. Before the superstructure of the ship, an Oto Melara Super Rapid artillery installation with a 76 caliber mm gun is provided. In addition, the Raytheon Phalanx Mk 15 Block 1B anti-aircraft gun was included in the ship artillery. The barrel armament complex is complemented by four large-caliber machine guns.

Like other ships of its class, the PGG 618 Tuojiang Corvette will be able to operate helicopters or unmanned aerial vehicles. At the stern of the ship provides a landing pad. As follows from the available materials, the head ship of the Hsun Hai project is not equipped with a hangar to accommodate a helicopter. Perhaps the storage capacity of aircraft will be provided in the next version of the project.

Of particular interest is the electronic equipment designed for new ships. The development of all such equipment involved Zhongshan Institute of Science and Technology. The exact composition of the radio-electronic equipment complex is unknown, however, there is information according to which the radar, combat information and control system and its other elements are fully implemented on the Taiwanese element base.

As already mentioned, the construction of the first ship under the Hsun Hai program cost the Republic of China 890 million Taiwan dollars. In April, Taiwan's 2012 determined the total cost of the entire program. According to the decision of officials, almost 25 billion Taiwan dollars (more than 850 million US dollars) will be spent on the construction of new ships for several years.

According to current plans, the military of the Republic of China intend to get at least nine new type corvettes. Moreover, the exact number of ships planned for construction has not yet been determined. Depending on the available capabilities and needs, the Taiwan Navy will receive 9, 10 or 11 ships. The final decision on the required number of Hsun Hai corvettes will be made only in a few months. The military intends to conduct tests of the lead ship and make the necessary conclusions based on their results.

Tests of the head corvette should be completed by the end of this year, but if any problems are identified, their extension is possible. Thus, the construction of new ships under the Hsun Hai program starts no earlier than next year. Then the question of the required number of corvettes will be resolved. The deadline for the construction of the series, for obvious reasons, remains unknown.

The geopolitical situation in the Asia-Pacific region speaks directly about the purpose of the new ships. In addition, this question to some extent reveals the nickname of promising Taiwanese corvettes. The main adversary of the Republic of China since its inception has been the People’s Republic of China. In recent years, the PRC has been actively developing its naval forces and building warships of several new types. Not so long ago, the first aircraft carrier appeared in the PLA Navy, and in the coming years it is planned to build new ships of this class.

Apparently, it was with the active development of the Chinese military fleet the nickname of the Taiwanese corvettes - “killer aircraft carriers” - is tied. The possibility of starting a war between China and Taiwan is the main stimulus for the development of the armed forces of the latter. Thus, the new corvettes in the future should significantly increase the combat effectiveness of the Taiwanese Navy and, possibly, become one of the constraining factors.

In the meantime, there is not a single Hsun Hai project corvette in the composition of the naval forces of the Republic of China. The lead ship of the project has not yet been launched. Currently, it is being tested by various systems. The PGG 618 Tuojiang corvette sea trials will begin in the next few months. All checks and improvements will continue, at least until the fall of this year. Construction of the following catamaran corvettes will begin no earlier than next year. Thus, over the next few years, Hsun Hai-type corvettes will not be able to have a noticeable effect on the combat capability of the Taiwan Navy. Nevertheless, a new project is being created with a foundation for the future, and so for the time being it is necessary to wait until the end of the lead ship’s tests and the final decision of the naval command.