March 19 2014
37
You come to this conclusion inevitably if you analyze how the EU reacted to various events of recent years, what official position it took in certain situations and how it responded to challenges. For Russia, which has not yet overcome the post-Soviet syndrome, where they are so used to idealizing everything Western, this is a natural shock. How is it that many of us are asking, especially those to whom Europe seemed to be a stronghold of democratic rights, freedoms, justice, social protection, unshakable foundations of law and equality. And so, too often, alas, recently the actions and political decisions of the leaders of the European Union countries, the coverage of significant world events in the biased media of the EU countries suggest a very specific idea: all these songs are from someone else’s voice, or rather, “backing” to the solo part world famous performer.


Who he is is not a secret to anyone. Here are some of the most vivid examples. The world did not have time to calm down after the invasion of American troops into Iraq, where, by the way, despite loud statements, they did not find any chemical weaponslike all countries that supported this cruel and unwarranted military campaign, they took on Syria. With great enthusiasm, they began to discuss the bombing of Syria on the grounds that the locals allegedly have a bad life under the dictator. Now let us remember who was the main initiator and instigator of the military campaign in Iraq, who supported the opposition in the Arab countries, who wanted to hit Syria the most? The United States and partly their regional allies like Saudi Arabia. What was the position of the EU countries? They supported America.

They supported, even despite the fact that it was the EU countries that had to spend enormous sums of money, to accept tens of thousands of refugees and immigrants, who were poorly assimilated with the indigenous population, but who had all sorts of rights. Russia was condemned for supporting a peaceful solution to the Syrian conflict, as usual, amicably and unanimously. The Western press also demonstrated a striking consensus on the fact that Putin is a Russian dictator who supports the Syrian dictator, and Western leaders for bombing in the name of democracy, so that ordinary Syrians, like once Iraqis, became literally ill with happiness. And at least one Western publication or television channel at that time gave a more or less wide range of opinions! If at least one Western expert or correspondent supported propriety for the sake of a peaceful solution of the issue and the position of Russia and China, or raised the question of whether the western position is correct. There were none, and there was no discussion. Moreover, it did not happen again. Who remembers the events in Georgia in August 2008, of course, noted that this is already a trend. 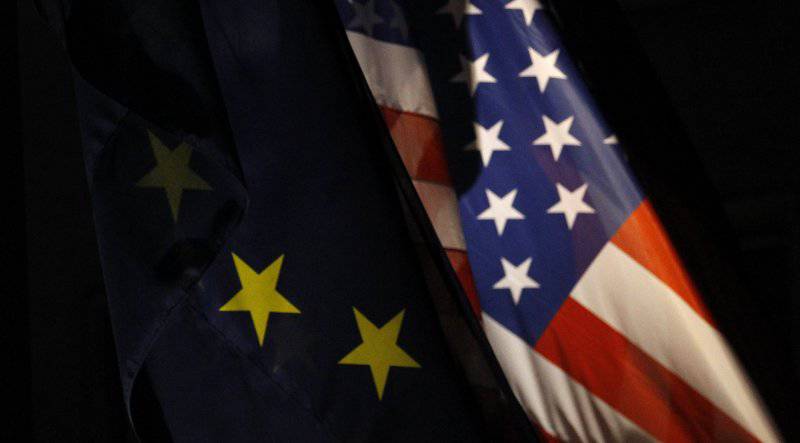 After the scandalous revelations of Snowden, it seemed that the national pride of the eurozone countries and their leaders should be hurt by the impudence of the US towards friends and partners. But this did not happen. Slightly made some noise, apparently more for the view. They frowned slightly and swallowed, so to speak, the bitter pill from the "big brother" ...

And then there was the Olympics in Sochi. And again, unity is almost like members of the Soviet politburo. The US said that the country's leader does not intend to honor Russia to attend the opening of the games. Immediately, as if on cue, the rest of the EU leaders refused to come. Amazing solidarity! Moreover, many US and EU officials have repeatedly called for boycotting the Olympics altogether. An unprecedented propaganda campaign around the games was launched, which turned the sporting event into an object of political manipulation and open blackmail. And again in the Western media flows of mud, lies and attacks on Russia. For all that was and what was not. And this is “in gratitude” for the warmth of the meeting, the smiles and hospitality of the volunteers, the beautiful ceremonies, the soulful atmosphere and the new, wonderful infrastructure created for playing games with such difficulty and love. No truly positive and sincere feedback, just ridicule and anger. I, as a Russian, it was all painful and insulting. Not for the country, not for Putin, not for the athletes. And for myself and for ordinary people, who from their heart tried to make these games kind, beautiful, comfortable, safe, comfortable and fair. It’s a shame for all those whose work the Western media not only didn’t appreciate, but gladly splashed mud every day, hyper-centered on minor issues and ignored positive sides, cut out whole pieces from the opening and closing ceremonies, firing advertising on the most beautiful and vibrant places.

And now - Ukraine. The picture is already becoming familiar: the United States is putting pressure on the European Union, and all the member countries of this alliance unanimously support America. It is already obvious that Europe is ready to support any development of events imposed on it from outside in Syria, in Ukraine, in Honduras - anywhere, even on Mars. Even at the cost of breaking relations with Russia, and, if necessary, with the rest of the world. Does Washington announce that it is taking sanctions against a dozen Russian officials? The European Union immediately takes "under the hood" and, wishing to be holier than the Pope himself, makes a list of sanctions for several dozen Russians, Ukrainians and Crimeans.

There is an obvious desire - to please America, the rest is irrelevant. Only these relations are really significant, only they determine the vector of the whole foreign policy of the European alliance. I don’t understand: why did Europe unite and create the European Union, if it didn’t strengthen its position in the international arena and it continues to always and everywhere dance to the tune of Washington?

Support al-Qaida militants in Syria? Of course. Radical Nazis in Ukraine? No problem. Stop the plane of the President of Bolivia call from Washington? Will be done. Boycott the Olympics in Sochi and support informational anti-propaganda? With pleasure. To impose sanctions on Russia for ensuring the security of its borders and giving the Russian people living in the Crimea the opportunity to make their choice? By all means This is the kind of freedom of speech, pluralism of opinions and independence of opinion on European ones.

I remember that during the Olympics my students asked questions more than once: why did they throw mud at us like that, what did we do wrong to them? After all, there is no longer any communism, no iron curtain, so many cultural, economic and human connections have appeared. Answering these questions is both easy and difficult at the same time. It is easy, because it is a simple statement of fact: a war is being waged against our country, our Russia, the real one. Fighting journalists, politicians, diplomats, leaders of countries. Their reaction to the Olympics in Sochi, and now to the Ukrainian events, has shown how unified they are in their hatred of Russia and the Russians. But even to say it out loud was difficult.

But it is necessary to speak. It is impossible to hush up the indisputable fact: after the whole chain of Ukrainian events, after the outcome of the Crimean referendum and the reaction of the West to them, this very war no longer goes somewhere far away, beyond our threshold. She came close to the borders. And maybe even crossed them somewhere. It should be recognized that Russia is now a belligerent country, and therefore it is worth loudly and loudly to reflect on what can be expected of Russia in this connection. Talk about Independence, as a method of solving political issues and about the possibility of its repetition in Moscow. On how you can use the fight against corruption to overthrow the government and the use of nationalists as assault troops of the opposition. On the unenviable, and sometimes destructive role of the liberal intelligentsia. About the oligarchs, which, as life shows, are often sponsors of radical revolutionary movements, and in this connection are busy with the Russian colleagues of Ukrainian billionaires. And, most importantly, to talk about what future path Russia will take, and why the formation and development of the Eurasian Union is so important for it.

In short, there is something to think about and talk about. And we will continue this conversation.

Ctrl Enter
Noticed oshЫbku Highlight text and press. Ctrl + Enter
We are
Results of the week. “Ah, here are some of the people - greedy for someone else's good!”Results of the week. "How are people to the greedy good of others"
Military Reviewin Yandex News
Military Reviewin Google News
37 comments
Information
Dear reader, to leave comments on the publication, you must sign in.