March 18 2014
325
St. George Hall of the Moscow Kremlin, perhaps, never in the newest stories The Russian Federation did not see anything like it. This emotional uplift, the spirit of unity, fraternity, which literally permeated the atmosphere in the hall itself, and went beyond it even through the lenses of video cameras, transmitted to ordinary Russians. 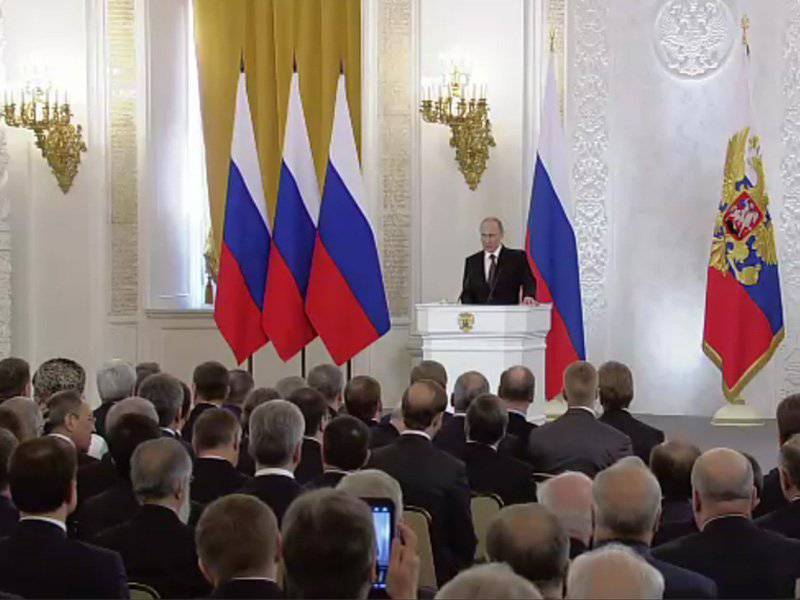 Officially, the speech of the President of the Russian Federation Vladimir Putin was the name of the message to the Federal Assembly of the Russian Federation. However, the words that sounded in the Kremlin became a message not only to the parliamentarians. These words turned into a message to the whole modern world. Putin did not turn his speech into a dry official, around which fires of interpretations, so much loved by Western “partners” lately, could flare up again. The president has built his appeal in such a way that it has touched literally every person who lives in and outside Russia today, has touched effectively and emotionally. It became intelligible even for those who have only recently been engaged in the search for spears in another's eye, without noticing the logs and the deadwood in their own eyes.

The President made it clear that our country learned very well how to draw important lessons from the historical process. Vladimir Putin, on the basis of clear and undisputed historical facts, explained to skeptics, so to speak, that such a concept as the Russian world exists in a broad sense, and that if someone today or tomorrow will have a steady desire to subject the Russian world to further fragmentation, trampling his interests, the infringement of the rights of many nations, this richest world of components, Russia will not, with its head down, observe such a destructive process, but will find an effective way of counteracting within unarodnogo law.

The Russian president stressed that the history of Crimea and Russia cannot be considered separately from each other, as he stressed that no one will ever force us to oppose Russians, Ukrainians, Crimean Tatars, and other nationalities to each other. All attempts of such opposition are a priori destructive and therefore doomed to failure. The Crimean referendum, which ended last Sunday with an unconditional victory for people who cannot imagine themselves without Russia, has perfectly demonstrated this.

In Crimea, literally everything is permeated by our common history and pride. Here is the ancient Chersonesos, where Saint Prince Vladimir was baptized. His spiritual feat - appeal to Orthodoxy - predetermined a common cultural, value, civilizational basis, which unites the peoples of Russia, Ukraine and Belarus. In Crimea - the graves of Russian soldiers, whose courage the Crimea in 1783 was taken under the Russian state. Crimea is Sevastopol, a legendary city, a city of great destiny, a fortified city and the homeland of the Russian Black Sea military fleet. Crimea is Balaklava and Kerch, Malakhov Kurgan and Sapun Mountain. Each of these places is sacred to us, these are symbols of Russian military glory and unprecedented valor.

Crimea is a unique blend of cultures and traditions of different nations. And by this it is so similar to big Russia, where for centuries has not disappeared, not a single ethnos has dissolved. Russians and Ukrainians, Crimean Tatars and representatives of other nations lived and worked alongside on the Crimean land, preserving their originality, traditions, language and faith.

The topic of the reunification of the Crimea and Russia would obviously not be complete without taking into account the circumstances imposed by the pressure that Western “partners” are trying to promote internationally, as well as their appointees from the new Ukrainian “government”. And the Russian leader did not miss the opportunity to dot the i's in this issue. The President noted that Western states today profess not even a policy of double standards, but a policy of overt cynicism, based on a blind desire to cling to a unipolar world, in which all international norms are laid down, in which international institutions play the role of servants for the interests of an “exceptional” state. Vladimir Putin, talking about the distortions in a unipolar world, recalled the bombing of Belgrade by NATO forces, recalled violations of all international norms during the invasion of Iraq, and the invasion of Libya. He also recalled how Kosovo’s territory was leaving Serbia. At the same time, the Russian president drew the attention of “partners” to all the decisions that they themselves took on the fact of Kosovo independence, quoting their words for them from UN court decisions, international declarations and decrees ... As they say, if you forget, Russia will remind you .

I don’t like to refer to quotations, but still I can’t resist, another excerpt from another official document, this time it is the United States 17 written memorandum of April 2009 of the year submitted to this very International Court of Justice in connection with the hearings on Kosovo. I will quote again: “Declarations of independence can, and often do, violate domestic law. However, this does not mean that there is a violation of international law. ” The end of the quote. They themselves wrote, trumpeted the whole world, bent all, and now they are outraged. What After all, the actions of Crimeans clearly fit into this, strictly speaking, instruction. For some reason, what is possible for Albanians in Kosovo (and we treat them with respect) is forbidden to Russians, Ukrainians, and Crimean Tatars in Crimea. Again the question arises - why?

In this connection, of course, other thoughts arise. We are told about some kind of Russian intervention in the Crimea, about aggression. It is strange to hear it. Something I don’t remember from the history of a single case that intervention and aggression would take place without a single shot and without human victims ...

In a word, we have every reason to believe that the notorious policy of containing Russia, which was carried out in the 18th, 19th, and 20th centuries, continues today. They are constantly trying to drive us to some corner for the fact that we have an independent position, for defending it, for calling things by their names and not hypocritical. But everything has its limits. And in the case of Ukraine, our Western partners crossed the line, behaved rudely, irresponsibly and unprofessionally.

They knew perfectly well that millions of Russian people live in Ukraine and in the Crimea. How much need to lose the political sense and sense of proportion, in order not to foresee all the consequences of their actions. Russia was at the turn, from which it could not retreat. If you compress the spring until it stops, it will sometime open up with force. We must always remember this!
Putin noted that in today's Ukraine there are no legitimate authorities with whom a constructive dialogue could be held, but at the same time he expressed the hope that the Ukrainian people would restore order in their country through civilized and democratic means. The Russian president noted that everything that Ukraine has to face today is on the conscience of those who sacrificed integrity and order in Ukraine to their own ambitions. At the same time, the president made an important remark about the fact that if today Russia and Ukraine oppose themselves because of their position on the Crimea, the Crimea may be completely in the wrong hands. In whose name exactly everyone understands. Speaking about the possible entry of Ukraine into NATO, Putin said that he could not even imagine that NATO troops would fill the city of Russian military glory Sevastopol.

An important part of the speech of the Russian president was gratitude to China and India, who approached Russia’s position on the Crimea with understanding. No less important was the appeal to the people of Germany, to whom Vladimir Putin recalled that the Russian world had come out with great support for the reunification of the FRG and the GDR.

Our country unequivocally supported the Germans sincere, irrepressible striving for national unity. I am sure that you have not forgotten this, and I hope that the citizens of Germany will also support the striving of the Russian world, of historical Russia for the restoration of unity.

The key point of the speech of the Russian president was his address to Ukraine and the entire world community with the words:
Do not believe those who scare you with Russia
.

We want friendship with Ukraine, we want it to be a strong, sovereign, self-sufficient state. After all, for us, Ukraine is one of the leading partners, we have many joint projects, and in spite of everything, I believe in their success. And most importantly: we want peace and harmony to come to the land of Ukraine, and together with other countries are ready to provide this all-round assistance and support. But, I repeat: only the citizens of Ukraine themselves are able to clean up their own home.

The result of the message is not only the signing of an agreement on the entry into the Russian Federation of two subjects - the Republic of Crimea and the city of federal subordination of Sevastopol - but also a real emotional upswing in the entire Russian world, which made a truly historic decision against the backdrop of complex geopolitical tectonics. Undoubtedly, this decision opens up a new page for the whole world process and makes Russia a powerful geopolitical player whose interests simply cannot be ignored by definition.

Crimea was accepted into the Russian Federation at the time of signing the contract, the contract was signed a few minutes ago on March 18 2014. (Kremlin official report). 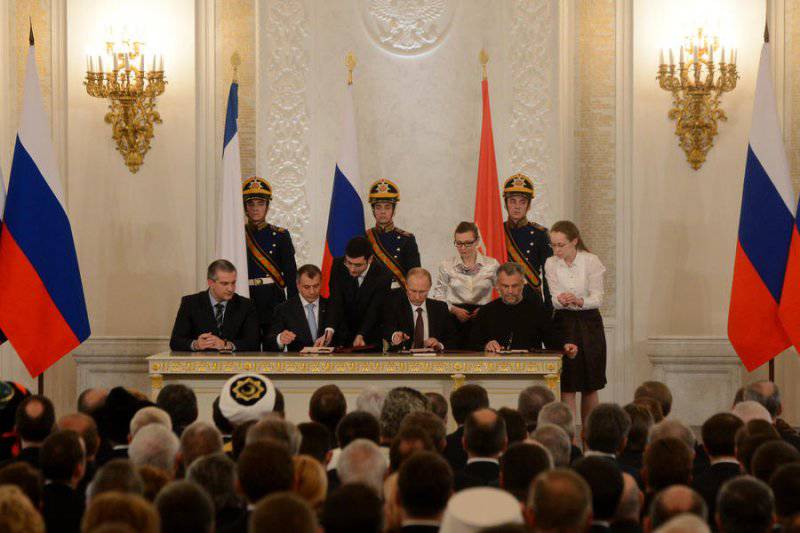 This is truly: Go Russia!