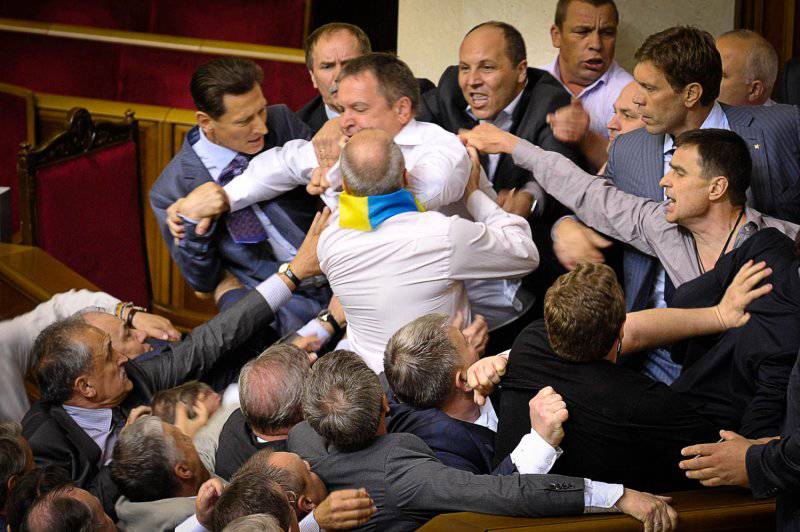 ... Our junta had an unexpected problem. Last Thursday and Friday it was impossible to collect a quorum in the "parliament", banally absent people's deputies. Only about 150 people came and, even with the cards for the voting of the missing deputies, 226 votes were not collected, and, consequently, laws could not be passed.

I must say that the current rulers simply lost sight of control over the people's deputies. The fact is that right after the coup, the smartest of them simply fled the country, and those turned out to be somewhere around 80-100 people. Thus, 450-350 people remained from the 370 people's deputies immediately after the coup in the country. After the process of "voting" in 20-x numbers, the rest began to think about what was happening, and, after the people's deputies were released from the Verkhovna Rada, they began to slowly shed from the country. At first, the Usurpastor somehow did not attach any importance to this phenomenon, since the decreasing ones mainly transferred their voting cards to their colleagues until Thursday it became clear that 150 people simply didn’t have time to vote even for 226's physically.

After that, the team was given to find all the remaining people's deputies in Kiev and drag them to the Verkhovna Rada on Saturday. Scratched somewhere 250 people. Now, behind everyone, strict security was established so that the rest did not run away. And, it must be said, not only the former deputies from the PR and the Communists fled from the happiness of democracy established in Kiev, but also opposition MPs. In principle, now only ideological people's deputies remain in BP, as well as those who are kept in Ukraine by business and real estate and those who did not manage to save up for second citizenship and real estate in warm countries. These are deputies who entered BP for the first time.

Now, regarding the executive bodies and the "siloviks".

The personnel policy is amazing - these types of people have no place to put in top positions. Some were also fired by Yushchenko for his professional incompetence, and this already says something. Priority is given to Westerners, and somewhere I saw a figure - more than 78 percent of ministers - people from western regions. We had a Donetsk gang, now we have Lviv. Bribery not only did not decrease, but increased by an order, they are not afraid of anything at all.

In general, you can imagine the level of competence of top managers in the Ministry of Internal Affairs. In some ministries it is even worse, people do not have specialized education, and in some deputy governors from all education they have a school certificate, but they are “heroes of the revolution”. A number of ministries are sitting "commissioners of the Maidan", unknown to whom appointed, along with the minister giving their orders. As a result, the ministry’s staff tries to do nothing at all.

In the prosecution bodies, there is also a move - people en masse, if their length of service permits, retire, as persistent rumors circulate that there will be no more wages. The same picture in the Ministry of Interior.

To summarize what has been said, it can be concluded that the central apparatus of the governing bodies is actually paralyzed, the control system is seriously destroyed both in the center and in the western and central regions of Ukraine, i.e. where there were "revolutionary manifestations".

In the southeastern regions, where there were no such events, the apparatus is still manageable, with the exception of the structure of the Ministry of Internal Affairs. Here, they do not deafly accept new appointees and quietly sabotage orders, which can be seen from the reluctance of the police to disperse rallies in Donetsk.

By the way, the junta expresses dissatisfaction with Akhmetov, suspects him in a double game and unwillingness to help in defeating the resistance movement in Donetsk, and even in separate negotiations with Moscow. To be honest, I have little faith in this, however, this is a topic for another conversation.

The courts, at least in Kiev, with great difficulty forced to work, but civil cases are considered, the criminal ones are still trying to endure, since it is not known who you are running into. By the way, today was considered one business case. At the court hearing by one of the participants of the process there were “heroes of the revolution” in masks and with machine guns. Need I say in whose favor was the decision?

Now, regarding the National Guard and PS. 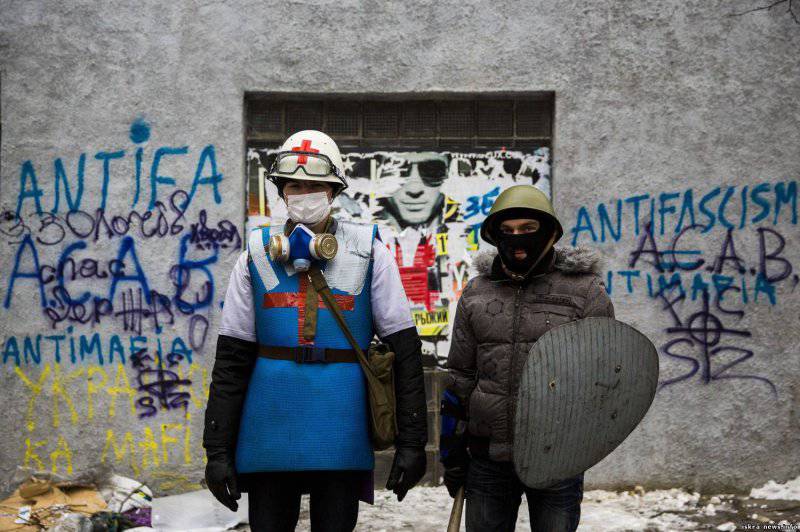 In the National Guard under write "hundreds of self-defense", which "went" under Parubiy. The rest of the “hundreds” didn’t want to care about all the passionate calls to protect the Motherland. They "nestled" in Kiev, armed, and only laugh at calls to surrender weapon, despite all the punishments from heaven that Avakov and Nalyvaichenko call upon their heads.

By the way, with the discipline in the National Guard under itself, in which maydanovsky hundreds were enrolled, all is not well either. As it was reported today in social networks, the commanders of the maydanovtsy put cops from the explosives, than maydanovtsy actively dissatisfied. Both sides look at each other as wolves, BB-Schniki do not respond to the appeals "Glory to Ukraine - heroes of glory", citing the fact that there is no such greeting in the Charter. In addition, the maydanovtsy calculated that they would immediately be given a weapon, but it turned out that their studies began with a drill and giving a military salute. As a result, maydanovtsy rebelled and want to return to the Maidan. I had to Avakov and Parubiyu urgently go to the rebels and calm them down.

As for the PS, the PS refused to send its militants to the National Guard, and they will be studying in the centers of preparation of the SSU. At the time of the beginning of the whole mess, the neo-Nazi structures that are now part of the PS had relatively few militants who, besides, the PS shore. The lion's share of the militants joined the PS already in the course of the “revolution” and after it. In addition, the PS is not eager to abandon its own armed units, which Nalyvaychenko and Yarosh can use at their discretion, and which are not formally associated with the official structures of the state.

But besides the SBU, we have another interesting structure that is of interest to "our strategic partner of the United States." This structure is called GUR MO (Main Intelligence Directorate). It was created in due time by an ardent Russophobe General Skipalsky in the peak of the GRU GSh, but degenerated into something amoeba. No fuck she needed, did not receive funding, became famous only for notable drunkenness and scandals in a drunken case, as well as litigation between the intelligence officers (!).

But in early March, at the suggestion of Tenyukh, a certain General Pavlov, a native of Lviv, became the head of this structure. And in a few days, as well as in the Security Service of Ukraine, “strategic partners” appeared here, but not from the CIA, but from RUMO. First of all, they demanded all the personal files of the employees and began cleaning. So, that the real leadership in the GUR now, as in the SBU, are the Americans, they practically hold meetings and set tasks just like in the SBU. The same guys are engaged in recreating reconnaissance and sabotage groups GUR. There is reason to believe that those amers who were noticed in the Kherson region are just these kids from RUMO.

Let me make some general conclusions.

Putschists, who seized power at the moment, have limited resources - both monetary, and human, and material. It is vital for them to have a kind of “truce” with Russia in order to be able to crush the Resistance in the Southeast and strengthen. They need time, at least until the end of the month, to create more or less controlled units of the National Guard and the PS. But, if they are strengthened, you can be sure that the junta will do everything to destroy the “separatist movement” first, and then take on Russia.

Russia will get not just an unfriendly state, but a state sharpened to war with Russia, to begin with a secret, and then an obvious one. It is not excluded that the Wahhabi training camps may appear on the territory of Ukraine, the junta is quite capable of that.

And the final touch - the nuclear power plant will be guarded by the National Guard ...