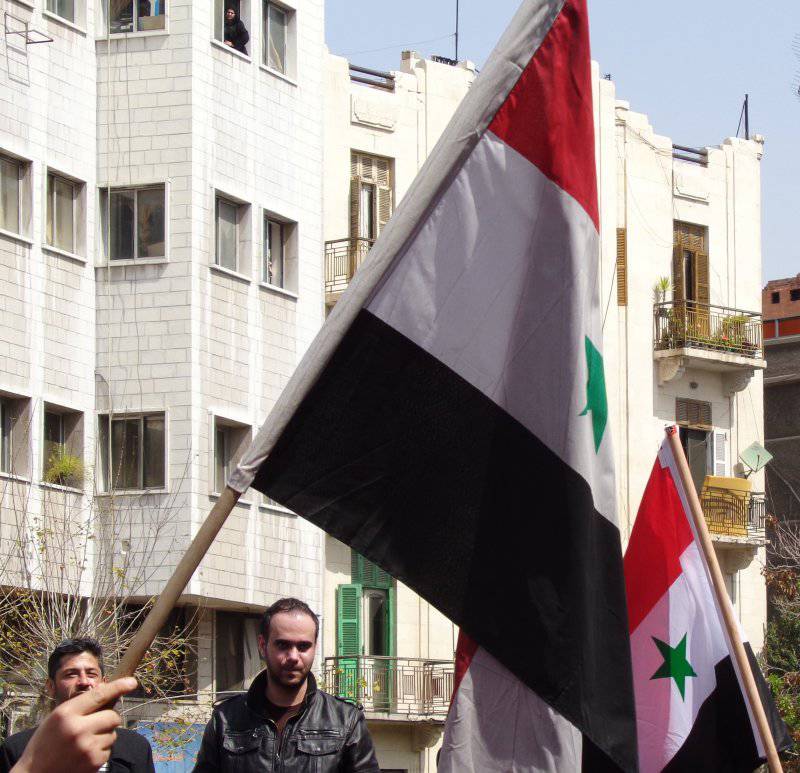 March 15 turned 3 since the time when Western intelligence agencies, with the support of their Arabian puppets, spread the influence of the corrupting “Arab Spring” to Syria. In their plans was the fall of the Syrian state in a few weeks. However, despite the unprecedented support of the “opposition” by external forces, despite the fierce political pressure, unilateral, illegitimate sanctions imposed by the US and the EU without UN sanction, despite the brazen threats of open intervention — Syria has been holding 3 for the year. And not just holding on, but winning the victory after the victory.

Just on the third anniversary of the beginning of the pseudo-revolution, the Syrian army entered the city of Yabrud in the area of ​​Kalamoun. Currently, the sweep continues, but we can talk about a very important turning point in the fighting in the province of Damascus. This special operation is no less important than last year’s sweep of the city of Al-Ksayr, Homs province. The terrorists are cut off from the border area between Syria and Lebanon, from where they were replenished and supplied weapons and technology.

At the same time, during the cleansing of Yabrud, clashes broke out between the militants themselves. Radical groups insisted on “standing to the end” - although they have nowhere to stand - the ground is burning under the feet of the bandits. More moderate forces wanted to "retreat tactically." Of course, such clashes are only on hand to the Syrian soldiers.

However, the criminals have nowhere to escape. Lebanese soldiers are not eager to see terrorists in their country. In the Ersal border region, a truck was detained along with five militants who were trying to flee into Lebanese territory. They confiscated weapons and ammunition. In the area of ​​Wadi Khaled, another group of bandits fleeing Yabrud was detained, from whom narcotic substances were seized.

SAR Defense Minister Fahed Jassem Al-Freij arrived in Yabrud. He visited the servicemen participating in the operation, paid tribute to their heroism, and expressed moral support.

On these days, the Syrians hold solidarity actions throughout the country with the heroic army defending the country from gangs. On March 15, a mass demonstration was held in the city of Deir ez-Zor in the Al-Jura district.

On March 16, people gathered at Saba Bahrat Square in the center of Damascus to express their support for the army and the country's leadership and to celebrate the third anniversary of Syria’s resilience in these difficult conditions. 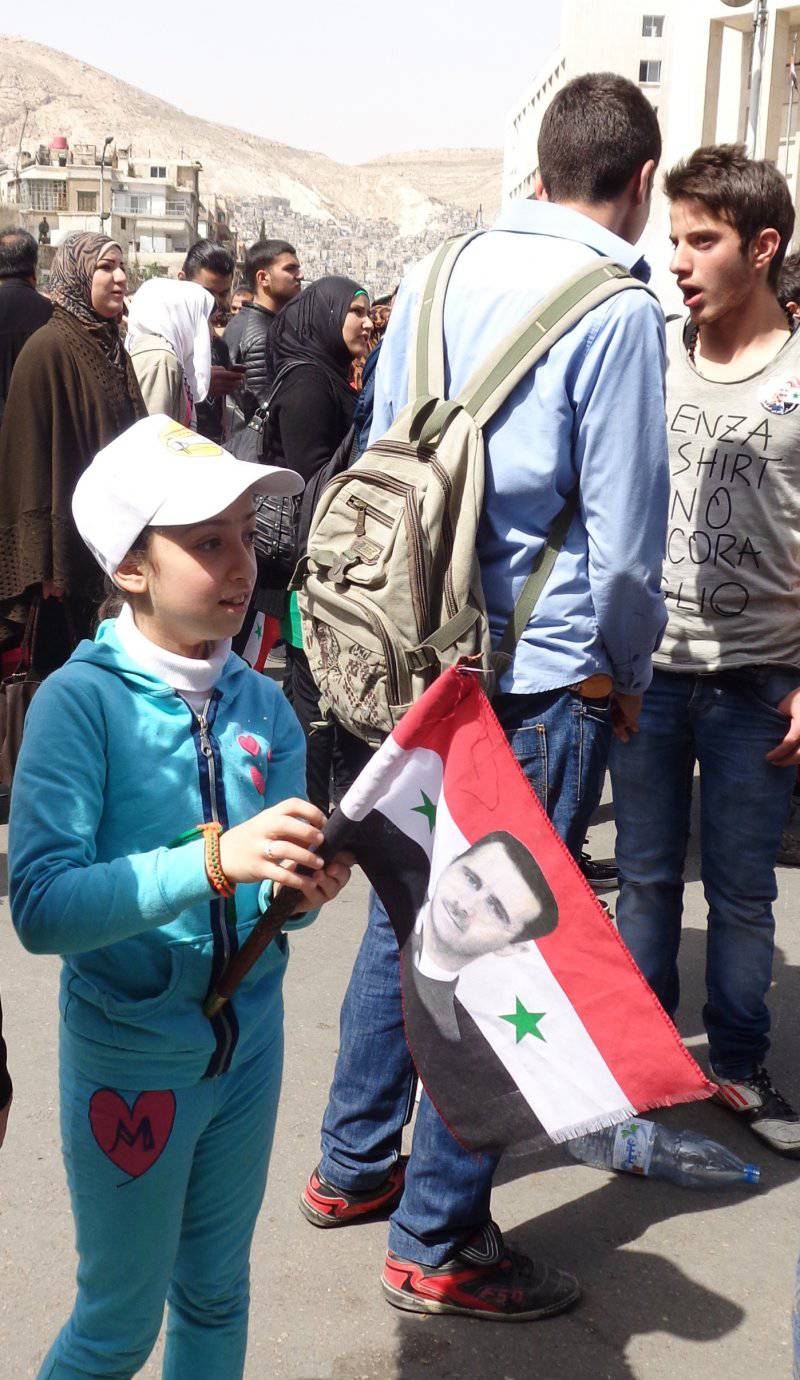 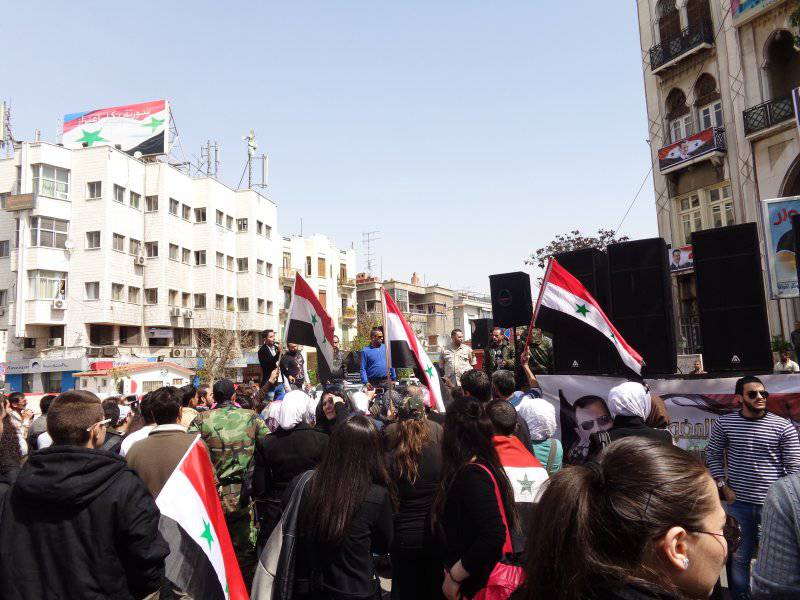 Another demonstration was held in the province of Damascus in the city of Deir-Atya.

Meanwhile, the Syrian parliament approved a bill on the holding of presidential elections to be held in July this year. Unprecedented is the fact that it is against the holding of democratic elections in Syria, provided for by the Constitution, in due time, - the West and its puppets are expressing.

At this time, the position of the United States and Europe was instructed to voice the UN special envoy for Syria Lakhdar Brahimi, despite the fact that he, as an intermediary, must be neutral. However, for some reason, he took on this role and said the absurd thing: allegedly conducting a voting procedure in Syria could adversely affect the negotiations in Geneva, since the “opposition” is likely to refuse to participate in these elections.

Why did the idea of ​​democratic presidential elections in Syria not please the West? Apparently, by the fact that there is no informational reason to say that, they say, the “dictator”, with which Western politicians are trying to present the legitimate and popular among the masses, President Bashar Al-Assad, he wished “to remain in power indefinitely.” And what would be a pretext for external aggression!

In addition, the puppet Washington and Brussels - anti-Syrian "opposition" - make claims to the electoral law. In particular, they are not satisfied with the clause of the law, according to which a Syrian citizen who has lived in the country for the last 10 years can be a presidential candidate. This is quite a reasonable demand, since the head of state must live with the aspirations of his people, and not with the desires of someone from abroad.

But the “oppositionists”, who are used to jacking about foreign five-star hotels, expecting pathetic handouts from the owners, apparently, cannot find a single suitable candidate. Apparently, inside Syria there is not a single oppositionist person who has the courage to challenge Bashar al-Assad in an honest political confrontation.

"Oppositionists" just nobody to send to the polls. And, if this “opposition” really refuses to nominate its candidate, this will be another strong proof that it is infinitely far from the Syrian people and is not capable of expressing its will. As well as the fact that, in essence, there is no “Syrian opposition” - there are only bandit formations consisting of those who are far from political struggle and pursue selfish goals.

Ctrl Enter
Noticed oshЫbku Highlight text and press. Ctrl + Enter
We are
Zakharchenko in Debaltseve: "This city for us is a symbol of resilience, a symbol of struggle"Syria: Americans scare themselves, and Asma Asad buys chairs
Military Reviewin Yandex News
Military Reviewin Google News
37 comments
Information
Dear reader, to leave comments on the publication, you must sign in.