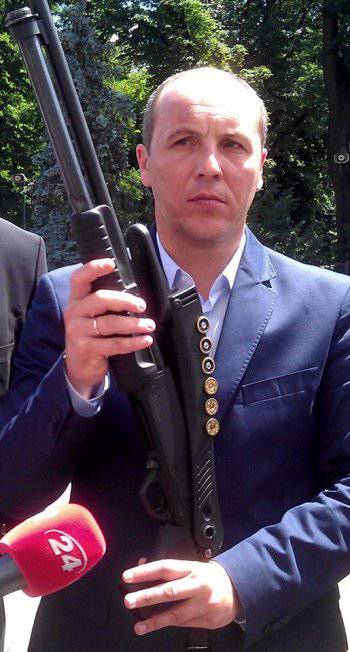 If it were not for Andrei Paruby (Secretary of the National Security and Defense Council), Putin would have let himself go. However, the courageous creator of “self-defense”, who was not afraid to go to the hospital at the most decisive moment, regularly exposes Vladimir Vladimirovich’s plans. And not only exposes, but also breaks. A week ago, Paruby personally, with the support of two or three faithful people, real Ukrainians, managed to ruin Russia's aggression in the Crimea. They were thinking to seize the peninsula on the move and make a stronghold of separatism there. To build, so to speak, the Kremlin nest. Did not work! Because Andryusha came out and said: your special operation has been foiled, damned Kremlin geba!


All Ukrainian units stationed in the Crimea put up courageous resistance to the invaders. Some unseemly people could say that the Ukrainian military are stupidly afraid even to stick their nose out of the location. In fact, this is certainly not the case. As a result, the aggressor, who did not have a hard time, was forced to hold a referendum in the Republic. Cowardly and vile step. Over 96% of the population of Crimea expressed a desire to join the Russian Federation on March 16. Until late at night in the major cities of the peninsula continued concerts and fun about this. The group “Lyube” performed in Sevastopol: “Sevastopol is waiting, Kamchatka is waiting, Kronstadt is waiting ...”. And the crowd of many thousands picks up: “... The land of their children’s relatives believes and waits.” Understandably, this is all a massive falsification. One and a half million Crimean voters at the point of the Russian machine guns already ran at a run to the polls to return home with tears in their eyes. I regularly watch Euronews, because compared to Ukrainian racially correct channels, it is an unattainable peak of objectivity. The Italian Sergio Cantone works from him in the Crimea. Always wearing a helmet and body armor. And then suddenly in the jacket and says: "Everyone is celebrating and happy." How so?!

In Svidomo, of course, blows the roof of anger. Is it for that they stood on Independence, so that at such a speed frankly prosrat everything ?! A cursory monitoring of the racially correct forums and social media activity testified: they are in full ahu ... of depression. It is proposed to shoot Turchinov, Yarema and Yatsenyuk, who betrayed “euromaidan”, “svobodovtsy”, who came to power in an alliance with BYuT, are called idiots and bastards. But then Andrei Paruby appeared at the very right time. Since his statement was in writing, there was no difficulty in understanding.

It turns out that Crimea is the victory of the national revolution. Not more, but not less. All the special services of independent Ukraine, including the grandmothers on the benches, worked in the mode of maximum mobilization. And yet, for the second time, they managed to thwart Vladimir Vladimirovich’s ambitious plan to seize Ukraine. Unfortunately, Putin did not know what kind of plan Mr. Paruby foiled, otherwise he would be somewhat surprised. So, according to Speech Therapist, “a large-scale operation by Russian separatists to invade Ukraine under the name“ Russian Spring ”was disrupted. What did the aggressor plan? Again, the word is to a person whose oral speech can only be understood by his closest associates: “An operation was planned in eight regions of Ukraine, the purpose of which is to hold rallies and proclaim popular governors, and then declare a procession to Kiev. But everything failed miserably. So says the secretary of the NSDC, having read Facebook. And indeed, in Donetsk everything “failed miserably.” This was facilitated by tens of thousands of people who took to the streets of the megalopolis. All of them came from Russia, and all had IDs of GRU officers, as well as an order from the command "to organize actions of civil disobedience in a short time."

The boys in Donetsk did not even understand that they took the city on the move. Captured the building of the regional court, the Security Service of Ukraine and the office of the company Taruta "ISD". Everywhere hoisted the Russian flags. Gone with a tour of the possessions of the governor. Found a buffet, a cultural snack, did not beat anything and went back to the square. Law enforcers in full outfit trot or side by side. Either they guarded the participants of the action, or the participants of the law enforcement action. So on the move and you will not understand. In Kharkov, thousands of people unfolded the hundred-meter flag of Russia and walked with it in the center. The most active visited the office of the "Right Sector" and other racially correct organizations. Well, they burned something there. For example, a minibus, where militants traveled and shot at the protesters. In Odessa, there was a full house. March in support of the Crimean referendum gathered ... well, just to fuck people. They demanded a plebiscite in Odessa for separation, the state status of the Russian language, and generally shouted slogans that brought the racially right patriots to insanity. In Mariupol, the insurgent masses decided to visit the enterprise of the Roshen concern for the presence of radicals there. At first, the leadership did not want to let anyone in, but when they broke down the metal gates, people went to meet them. No militants were found, but the guards were slightly naked. For order. Against the background of the referendum in the Crimea, these events looked like "a complete failure of the plans of the Russian separatists."

On Monday, the interim regime decided to build on its success in fighting Putin’s plans. Oleksandr Turchynov, acting as everyone who could, did not bother much and announced “partial mobilization”. What “full mobilization” led to, we all know very well. Now the army is waiting for funds from the Esemesos to come in to buy some ammunition and diesel fuel. Partial mobilization, on the other hand, should demonstrate the extremely resolute mood of the temporary government. It is due to, I quote, “the aggravation of the socio-political situation on the Crimean peninsula, unconcealed aggression, the Russian side’s enthusiasm for a part of the territory of the Autonomous Republic of Crimea and the city of Sevastopol”. This is emphasized in the corresponding bill, which Turchinov submitted to BP. The procedure is as follows: a mobilization decree must be approved by parliament. Although Alexander Valentinovich could not strain himself: he is his own speaker and president himself. However, Turchinov did file, and Rada voted. Partial mobilization looks a bit strange against the background of victorious reports of Parubiy about “disrupting the plans of the Kremlin.” After all, following the logic of "Speech therapist", it is necessary to arrange a holiday fireworks on the Maidan.

In the meantime, Russia's aggressive plans were frustrated more and more. The Supreme Council of the Peninsula declared Crimea an independent state. This is a victory for the NSDC and personally Oleksandr Turchynov. In accordance with the resolution of the parliament, which was dissolved by Kiev literally two days ago, “the legislation of Ukraine is not applied on the territory of the Republic of Crimea, the decisions of the Verkhovna Rada of Ukraine and other state bodies of Ukraine, adopted after February 21 of 2014, are not implemented”. “The activities of the state bodies of Ukraine in the Crimea cease, their powers, property and funds are transferred to the state bodies of the Republic of Crimea, defined by the government of the Republic of Crimea,” the document says. Well, the complete failure of the scenario for the split of Ukraine. Especially when you consider the fact that the Crimean parliament addressed Russia with a request for admission to the Russian Federation.

Further developments imply a temporary regime forcing with the help of mass hysteria controlled by the media in order to “mobilize”. The banner "United Ukraine" is irrelevant. In the fashion stories about volunteers who endlessly go to the collection points, shouting pro-Maidan slogans. “You can see May-Ukraine’s Ukraine with you all year round,” as if a stern Cossack of indeterminate sex addressed each one, pointing with his finger towards Vladimir Vladimirovich. In parallel, in strict accordance with the textbooks on the conduct of the coup, punitive detachments should be formed within a short time for raids in the eastern regions of the country. Well, if everything goes according to plan, then a civil war will begin.

Ctrl Enter
Noticed oshЫbku Highlight text and press. Ctrl + Enter
We are
Damned Olympiad, or a new baton in the hands of the WestWhat you didn't want to know about England
Military Reviewin Yandex News
Military Reviewin Google News
146 comments
Information
Dear reader, to leave comments on the publication, you must sign in.