Combat gear "Warrior" on the way

March 18 2014
130
Very soon, the Russian army will receive a completely new combat gear of the latest generation. At present, the “Warrior” equipment is already undergoing a series of military tests in various climatic zones of Russia. According to available information, military equipment "Warrior" should be adopted by the Russian army in the summer of the year 2014. A special meeting was devoted to equipping parts and formations of the Russian Defense Ministry with new combat gear, which was personally held by Dmitry Rogozin.


The meeting was held in the suburban town of Klimovsk on the basis of the well-known defense enterprise TsNIItochmash, which is the leading institution for the development of small arms, as well as various means of protection in the interests of the Ministry of Defense and other Russian law enforcement agencies. The meeting was attended by almost all the leading designers and leaders of the Russian defense industry who, by the nature of their work, are involved in the manufacture of various weapons, ammunition, as well as personal protective equipment. At the beginning of the meeting, the Deputy Prime Minister noted that the attention that is being paid to this issue at various levels today is easily explained, since with the use of combat equipment, an overwhelming number of combat missions in special and counter-terrorist operations and local military conflicts are being solved today.

Those times when motorized infantrymen went into battle, at best, having only a bulletproof vest, and at worst without any protection, are in the past. The outfitting of modern servicemen increasingly makes them look like characters from science fiction films. A modern soldier is not an ordinary marksman, but a full-fledged combat unit that possesses modern means of defense and an individual control system. Military equipment of modern war includes structurally and functionally interconnected elements of the 5 of the main systems: means of destruction, means of defense, means of reconnaissance and control, life support, and even energy. 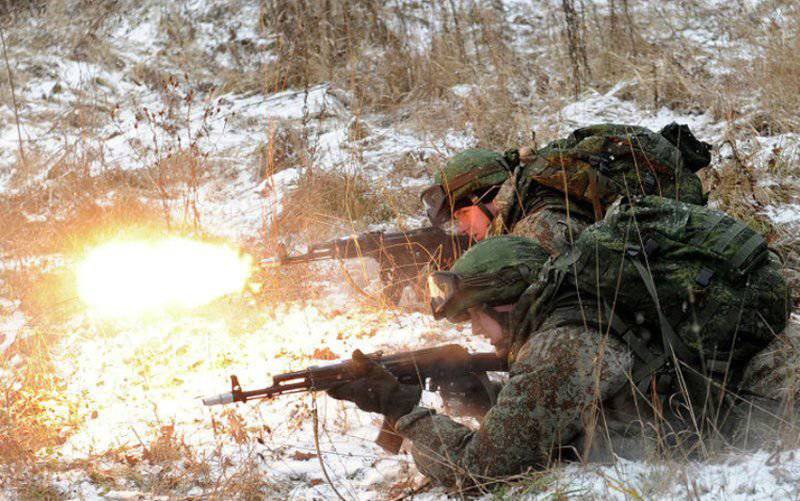 "Warrior" is a second generation combat equipment system. As part of the development work on this project, more than 50 domestic industrial enterprises, as well as more 10 polygons and military units of the Ministry of Defense worked together. Especially for the "Warrior" was re-created 21 element of the equipment of a soldier, another 17 elements were upgraded. Thanks to the work done, 1,5 was able to increase the efficiency of combat missions performed by military personnel compared to using the equipment of the previous generation. The general designer of the equipment “Warrior” is Vladimir Nikolaevich Lepin.

In appearance, the new Russian combat equipment is quite aesthetic, it is not worse, and in some things even prettier than modern American equipment. The “warrior” is distinguished by the differentiated and combined protection of a soldier. All vital organs of the soldier are covered with either metal-ceramic or special armor, or protective fabrics such as Kevlar - depending on the tasks. The new equipment is widely used synthetic protection. The helmet that has become familiar to us has been replaced with helmets of various configurations, which also change depending on the tasks at hand. Helmets can also be made from a variety of materials: steel, composites, titanium. They are able to save the head of a soldier in situations where the old helmet clearly made its way through.

In the "Warrior" was implemented such innovation as the instant dumping of all equipment when a soldier hit the water. That is, the equipment with considerable weight will not drag the serviceman to the bottom. A body armor made for the Navy is generally know-how. Russian specialists managed to combine both armor protection and a life jacket. In the event that the sailor who is on the watch suddenly finds himself behind the ship, he will not sink, but will remain floating on the surface thanks to such a bullet-proof vest. 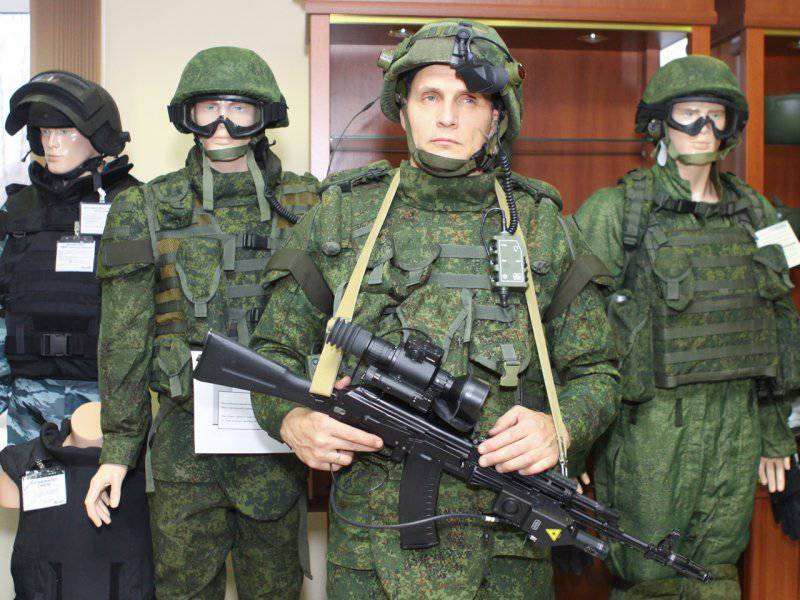 Military equipment "Warrior" literally crammed with a variety of electronics. Electronic maps of the terrain, satellite positioning, individual communication with each fighter, night vision systems and lighting devices, and much more will make the Russian soldier an integral part of a single combat system that will be controlled by the most modern network-centric technologies.

Specially under the "Warrior" is developed and small arms of new generations. Already developed thermal system aiming, which has no analogues in the world, as well as a special video module that allows you to fire from around the corner or because of a suitable shelter. At the same time, the transfer of information from the sight of the weapon to the screen of the soldier eye cup occurs wirelessly. At present, in many foreign analogues of the “soldier of the future” combat equipment, the transfer of data from the sight of small arms to the eye indicator is already implemented in a wire mode.

In addition to equipment, which is being created in the interests of the Russian Defense Ministry, Deputy Prime Minister Dmitry Rogozin was shown samples of equipment, which is already being produced for fighters and employees of anti-terrorist special forces. These are "Gladiator", "Legionnaire", "Centurion", "Sherp". According to the creators of this equipment, they are significantly better than the one that is in service with foreign special forces. Dmitry Rogozin was pleased with what he saw and noted that the protocol to be drawn up following this meeting will speed up the process of finalizing the “Ratnik” combat gear and adopting it. 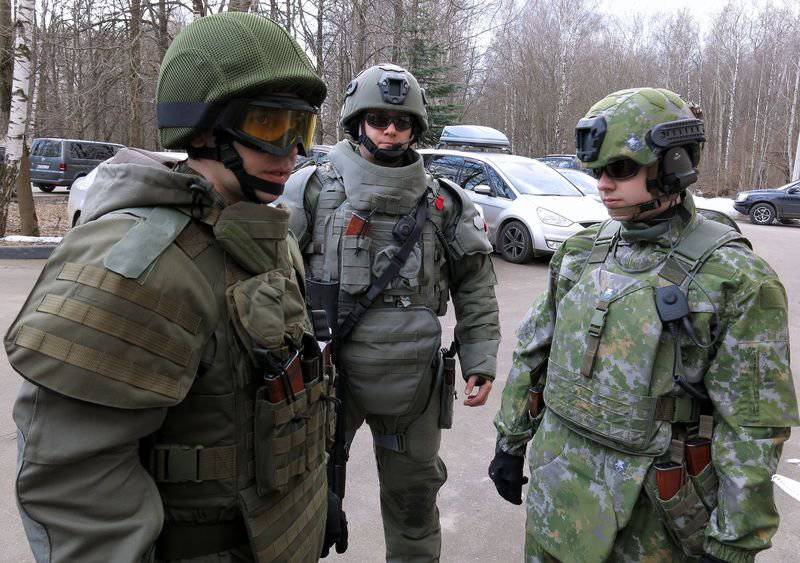 Rogozin said: “Firstly, he will push equipment of all Russian armed forces forward, and secondly, it’s a matter of honor for us.” The Deputy Prime Minister stressed that over the last two years a very serious step has been taken towards a completely different technical equipment of the Russian servicemen so that they feel as safe and comfortable as possible during armed clashes. He particularly noted the fact that the newest Russian developments presented were created as part of a private-public partnership. Currently, private companies are able to offer the military advanced competitive solutions for equipping special forces units.

Dmitry Rogozin noted that along with the development of strategic weapons, due attention should be paid to equipping Russian fighters who are daily forced to deal with manifestations of extremism and terrorism. According to the Deputy Prime Minister, a big step forward has been taken in this direction today. The next step in this direction should be the transition from orders for special units to orders for the entire Russian army. The result will be a change in the appearance of our army and fleet. At the same time, not only the appearance will change, the military will receive completely new qualities that will effectively solve all the tasks.

At present, the “Warrior” equipment is being tested in motorized rifle troops. State tests of the “Warrior” kits, which are intended for military personnel of various specialties of the Ground Forces (SV), are conducted on the basis of a separate motorized rifle brigade of the Western Military District (ZVO) under the leadership of the High Command of SV. In February, 2014 of the year at the Alabino training ground in the suburbs of the brigade of the reconnaissance unit of the brigade during combat training began intensive use of the Ratnik outfit kits. 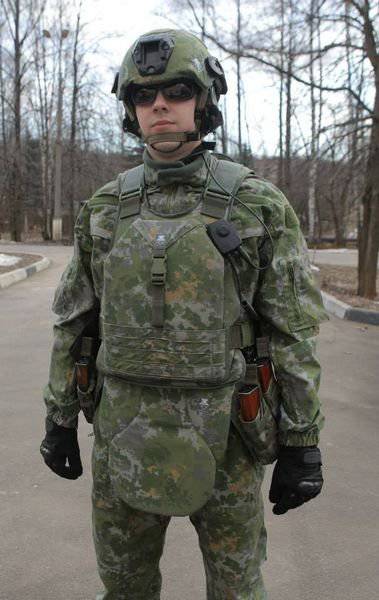 The basis of the “Warrior” sets consists of body armor, armor jackets, combat overalls, goggles, a headset with an active hearing protection system, a fighter’s elbow and knee protection kit, machine guns, sniper rifles, a grenade launcher, ammunition, a new combat knife, as well as daily night sighting system, all-day reconnaissance devices, standardized optical and thermal imaging sights, compact binoculars and other samples. In total, 59 elements of equipment of military personnel are included in the composition of combat equipment sets “Warrior”: shooter, driver, scout and soldiers of other specialties. All of them are arbitrarily divided into elements of the system of destruction, protection, life support, energy supply and means of control, communications and intelligence.

In addition, the set of combat equipment "Warrior" includes a multifunctional knife, a clock, a flashlight, a universal shelter, an autonomous source of heat, double-sided masking kits, a raid backpack, a small infantry shovel, an individual water filter, respiratory protection, equipment intended for chemical and radiation monitoring, special treatment and first aid, filtering clothes. As part of the testing and refinement of equipment, it was possible to achieve a reduction in the total weight of the kit to 24 kg, which allows the soldier to remain mobile while solving combat missions. At the same time, the level of protection was improved, the accuracy and accuracy of shooting was improved, the target detection range was increased both at night and in fairly difficult weather conditions, and the overall ergonomics of the kit were improved.

The main objective of the development of combat equipment "Warrior" is to increase the efficiency of the soldiers performing combat missions while reducing the number of casualties among the personnel of the units. The adoption of the “Warrior” should take place in the summer of 2014. According to the available information, in the current year 5-7 units will be transferred to the new set of combat equipment, all other units will have to switch to the “Warrior” over the next 5 years. 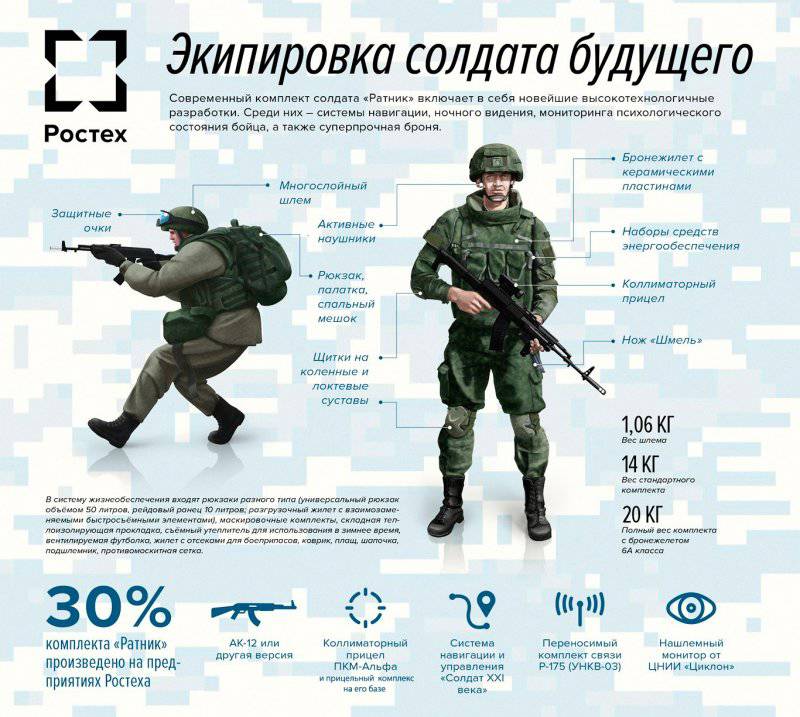 As part of the work on the “Warrior” combat equipment kit, during a series of preliminary tests, more than 100 of various elements of equipment were tested. Only the best of the created samples were allowed to state tests. The state defense order for 2014 for the year involves the supply of several tens of thousands of Ratnik combat equipment to the ground forces, naval infantry units and airborne troops.

The average warranty period of the “Warrior” kit is 5 years. In this case, this kit will be transferred from one soldier to another until he falls under the write-off procedure. For example, if only one soldier will wear a t-shirt with flaps, then a summer uniform will be designed for two, and the winter uniform will have more owners. Body armor, helmets, knives and small arms will last much longer. 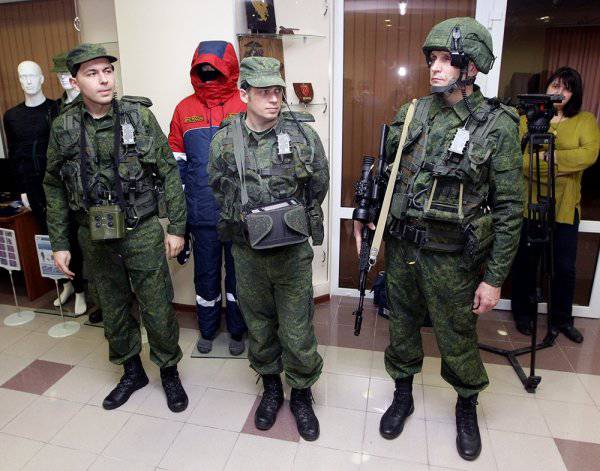 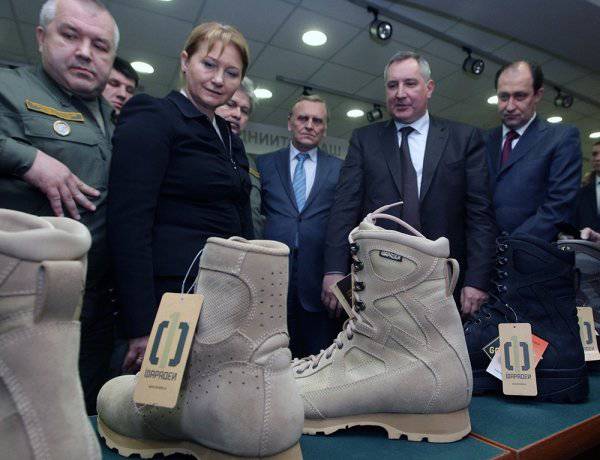 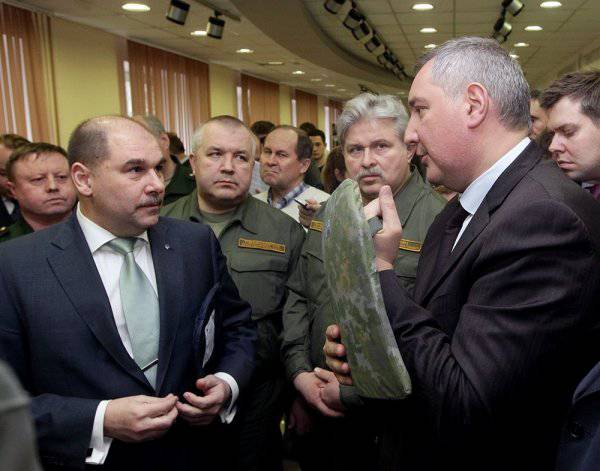 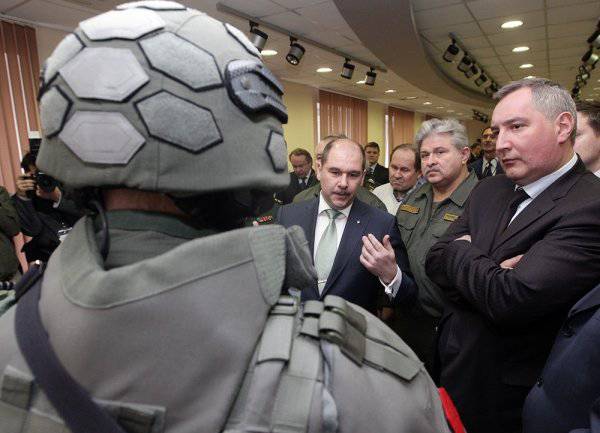 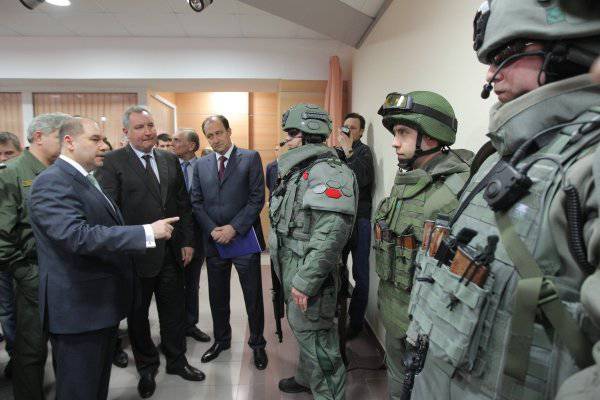 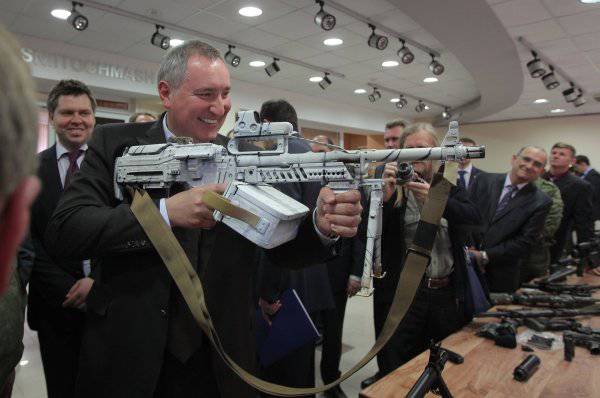 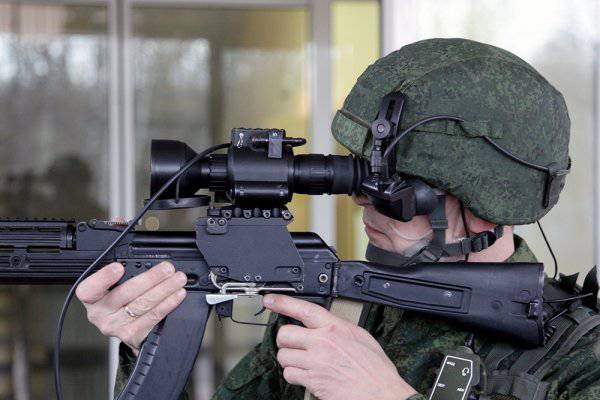 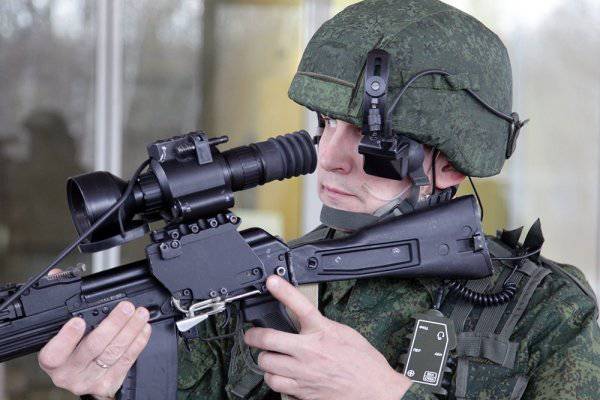