Change four "Mercedes" for one tank 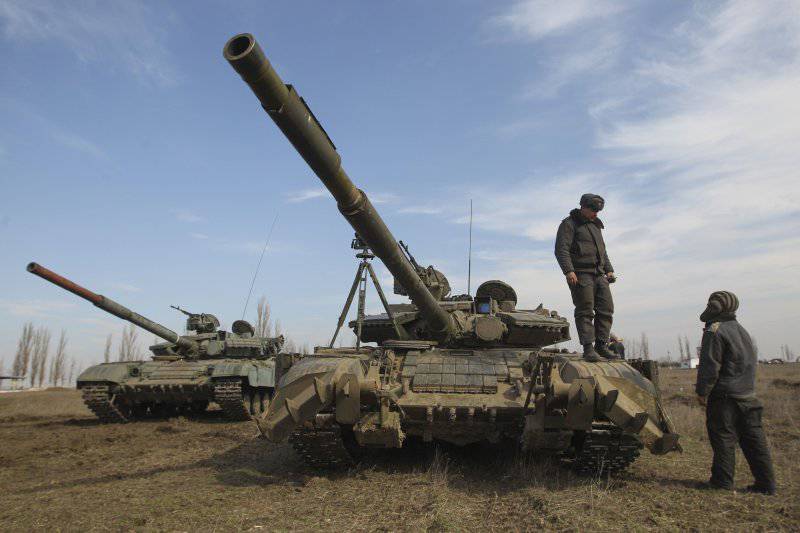 The first step has been taken - our Crimea! It remains to keep the situation, which continues to heat up. Kiev temporary workers must desperately need to shake up the situation, bring the matter to a real battle, so that more blood is shed. They are no longer interested in, by and large, the victory, they understand that the east of Ukraine and the whole of New Russia do not want to stay with the bankrupt "revolutionaries" of the Maidan. And even in Western Ukraine more and more they understand: something went wrong with the “winners”. Blitzkrieg failed ...

Therefore, instead of a normal dialogue with the East and Novorossia, the neo-fasophists mobilize convulsively and send everything they can shoot to the East of Ukraine. With the prospect of opening the Eastern Front-2 against its own people and Russia. History and the finale of the German Eastern Front teaches them nothing, their owners need revenge.

Therefore, before much blood has been shed, why not use the technology of our geopolitical opponents during the Gulf War during the occupation of Iraq?

Then the coalition forces conducted an operation, which they cynically called the "Golden Ass", following the Eastern saying: "There are no such fortresses, the gates of which would not have opened to the donkey loaded with gold." Almost all of Iraq’s generals were bribed by the Americans, the Iraqi army was actually beheaded, troop control was paralyzed even at the grassroots level, the morale of the troops fell, and there was no serious resistance. But it was a war between nations that never lived together. These are even different races, where everything is different - language, religion, mentality and even appearance. This explains the cynicism of Americans towards an absolutely alien adversary.

You can talk for a long time about the cynicism of bribing the enemy and dirty methods of warfare, unworthy of high morality and the Russian spirit, but let's see. In our case, the conflict is fomented by the stealing oligarchs of Ukraine between one people with centuries of experience living together. Russia today is trying to restore a large united state, in this is its Strength and Truth (otherwise the Slavs simply cannot survive the realities of the 21st century). Therefore, our conflict is a completely different case, and here we can talk only about the compensation of the opposing party for the failure to destroy and the preservation of lives. You can call it a premium for saving the world.

Therefore, I propose to perform the project "Guest", namely:

1. The Russian authorities are widely notify the Ukrainian troops that Russia insists on a political solution to the contradictions, and in order to prevent bloodshed, it proposes to move with military equipment to the collection points on the border.

3. All military personnel will be presented with a special status “guest of the Russian Federation” (the name is conditional, can be adjusted) for a period of up to one year, or Russian citizenship at the choice of a military person, and they will be under the protection of the Russian Federation for the duration of their stay on Russian territory.

4. To each guest of the Russian Federation here, at the point of delivery of military equipment, to provide forever for personal use: a car, a pre-announced premium, an identity card and a ticket to the resorts of Crimea, Sochi and the Caucasian Mineral Waters.

Of course, this list can be supplemented and adjusted, but the essence of the project is to withdraw the rest of the Soviet military potential from combat contact with our units.

It is necessary to explain to the deceived that they are sent to conquer new property for their former oligarchs. And they personally will not receive anything, except for the fights, wounds and death. The remnants of our common Soviet heritage (cities, communications, enterprises) will be destroyed, and, most importantly, the civilian population that they were called upon to protect will die.

Fans can argue that this is a very expensive project (they say, we eat up the last horseradish without salt), I can remind you that all wars once ended. And then it is necessary to restore the destroyed world, but even in this case the dead cannot be returned. Therefore, this project is strategically cheaper than all the other options. This will be Russia's investment in a common future, and the project is FAVORABLE to everyone except the arsonists from Maidan and their owners.

To fulfill military duty for the army of Ukraine today - to pass weapon. This will cool the hot heads of Maidan, who are ready to burn their own hut, just to annoy their neighbor. And let the questions of war and peace be decided by politicians at the negotiating table.

Because all wars always end at the negotiating table. This is an axiom.

Then why do you shoot?

Ctrl Enter
Noticed oshЫbku Highlight text and press. Ctrl + Enter
We are
A great interview with Sergey Lavrov: about Ukraine, Obama and IranWhat you didn't want to know about England
Military Reviewin Yandex News
Military Reviewin Google News
132 comments
Information
Dear reader, to leave comments on the publication, you must sign in.