NATO: There is no military solution to the conflict in Libya 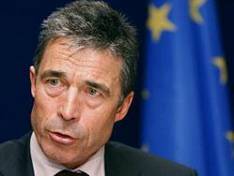 The conflict in Libya has no military solution. This was stated by NATO Secretary General Anders Fogh Rasmussen.

According to him, to resolve the situation in this North African country, it is necessary to find a political solution.

Meanwhile, the struggle for power in Libya between the rebels and the forces of Gaddafi continues.

Aviation Allies under NATO command struck the southern suburbs of the Libyan city of Misurata.

Earlier, forces controlled by the Libyan leader Muammar Gaddafi seized the western part of Ajdabiya. The rebels hold the center and eastern outskirts of the city.

This happened after the troops of Gaddafi fired at the suburbs of the rebel-held city of Ajdabiya with mortars. Explosions and gunfire were heard for half an hour. According to one of the rebels, the western gates of the city were attacked.

In the morning, NATO aircraft struck the military depots of the Libyan government army. Military arsenals with ammunition were located in the vicinity of the city of Zintan.

According to eyewitnesses, the Alliance aircraft inflicted at least 14 attacks on weapons storage facilities of the leader of the Libyan Jamahiriya Muammar Gaddafi.

After a missile strike by NATO aircraft, the rebels tried to approach the warehouses in order to assess the results of the bombing, but the military loyal to Gaddafi did not allow them to approach by opening fire from grenade launchers.

Zintan, located in 120 kilometers south-west of Tripoli, is under the control of the opposition, Gaddafi's troops are trying to oust the rebels from this city since March 16. As of April 8, an eyewitness to the Reuters incident reported, Gaddafi’s troops still remain in the suburbs of Zintan. According to him, instead of bombing the military arsenal, NATO aircraft should strike at the positions of the troops of Gaddafi. "We are afraid that if Gaddafi does not leave, and NATO ceases its operations, they (government troops) will take the city and massacre," the agency’s source said, stressing that he was speaking on behalf of all the inhabitants of Zintan.

In addition to Zinatan, the troops loyal to Gaddafi still remain at the city of Misurata, which is under the control of the rebels. 8 April, one of the residents of Misurata told Reuters, as a result of clashes between Gaddafi forces and rebels, five people were killed at least 10 were injured and taken to the city hospital.

Recall 17 March The UN Security Council adopted a resolution allowing to establish over Libya a no-fly zone, as well as to take all necessary measures, excluding ground invasion, to protect civilians. March 19 military aircraft of several countries, including France, Britain and the United States, launched attacks on targets in Libya in order to reduce the combat capability of Gaddafi’s forces. Since 31 in March, NATO is in command of the operation in Libya. Since April 4, American Air Force aircraft have not taken part in the bombing of Libya.