Tymoshenko mourns the Crimea and promises a collapse of Russia 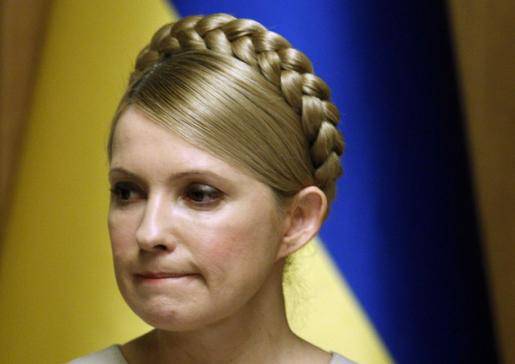 Ukrainian politics is not just on the other side of Good and Evil, it is beyond all. Reason, logic, elementary understanding of the subject. Since the Ukrainian media sing in one tune, cooking news on a single temnik, politicians can not bother and carry any nonsense, no one criticizes anyway.

Ukrainian prisoner Yulia Tymoshenko striking knowledge of the realities of the Russian economy, and in connection with the start of his presidential campaign, predicts, in the best traditions of the classics of Ukrainian literature, the devastation and collapse of the damned Muscovites.

"I sympathize with those Crimeans who were led to this adventure and became victims of their own frivolity and naivety. They can fall into darkness on their sunny island. The Russian regime will easily prove to them that the polar night also happens in the subtropics. All this can lead to a humanitarian catastrophe and unpredictable consequences for Crimeans. There will be no economic paradise. Russia has no resources for this, its economy is on the verge of collapse. And given the fact that the leading countries of the world are now imposing super-tough sanctions in Russia, tomorrow they will have no time for Crimea and not for Crimeans, " - Yulia Vladimirovna declares in her address on the Batkivshchyna website.

Biblical stories - A terrible darkness is approaching the sunny peninsula, so flourishing under the tender hands of the Ukrainian authorities, that the population voted almost unanimously for joining Russia. The Russian Federation, it turns out, has no resources for maintaining and developing the Crimea, similar to Ukrainian ones. Perhaps Tymoshenko is aware that in the development of infrastructure, including for the development of tourism, nenka-Ukraine has invested a mere penny? While only for the content of the Black Sea fleet Russia paid $ 100 million a year, and Chernomornaftagaz produces 1 billion 650 million cubic meters of gas per year on the Crimean shelf. Today, by the way, the first sanctions imposed by the European Commission are already known. They will definitely collapse the Russian economy - 21 people are denied entry to the European Union, including for some reason Medvedchuk and Yanukovych. Viktor Fedoritch exactly in the EU was going to, what a bummer.

"The results of this referendum are not recognized and do not recognize any civilized country. It is completely illegal, and its legal consequences are completely insignificant. This adventure will not be a long historical continuation " - our messiah Yulia Vladimirovna is broadcasting. Even if Mrs. Tymoshenko had studied international documents on this subject in the Kharkov hospital, she would have said the same thing in this case, after all, lies and hypocrisy are her essence.

"We are peaceful people and do not want to fight. But when necessary, we can not only defend. Perhaps, even against our will, a new and great mission has appeared in Ukraine: to help us destroy the tyranny in the neighboring state with spiritual and moral power!

Ukraine has learned to win and today has a powerful weapon in the world - will power, honor, truth and spirit! "

Brushing away a tear that ran down my cheek, I involuntarily remembered the words of another one of the same great strength of will, honor, spirit, and, most importantly, truth, speaker and politician Joseph Goebbels:

"The more monstrous you lie, the sooner they will believe you. Ordinary people believe more big lies than little. This corresponds to their primitive soul. They know that in the small they themselves are able to lie, well, and they are too shy to lie very strongly. A big lie won't even come to their heads. That is why the masses cannot imagine that others were capable of too monstrous lies. And even when they are explained that it is a matter of monstrous lies, they will still continue to doubt and will be inclined to believe that, probably, after all, there is a grain of truth here ... "

All adequate people realize the economic abyss Ukraine is falling into. Its army, with rare exceptions, is a pitiful collection of rusty, obsolete scrap metal, and the nationalist hell drawn from the abyss with brilliantly washed brains roam the streets of Ukrainian cities. But Yulia Vladimirovna bears nonsense, for which Dr. Goebbels would give her cookies and pat her cheek as the best student.

And what is happening in the Ukrainian government today? You, probably, thought that the “new people of Vlada”, having rolled up their sleeves, would start building up the destroyed economy and prepare the country for the sowing season? Wait, they will be engaged in such nonsense.

Let's look at a few examples of what they are going to take to the Verkhovna Rada of Ukraine and what its top government officials, passionate about the idea of ​​war, are doing and saying.

Today the deputies were given a draft resolution, which provides for the introduction of the death penalty for the period of armed aggression by Russia. It is proposed to shoot traitors, saboteurs, marauders, deserters and spies. Also, parliamentarians were offered to break all agreements with Russia and introduce a visa regime. The author of the resolution is a non-fractional MP - the hero of the Kolchak fronts Oleg Lyashko. Yesterday, the governor of Donetsk region Taruta together with my brother, they dug a huge ditch on the border with Russia, and the UDAR faction would insist on the adoption by the Verkhovna Rada of the law on the temporarily occupied territory.

A bacchanalia like this was in the Roman Empire - just before its death.

Yesterday, another honest and noblest person spoke about the referendum in the Crimea - Deputy Minister of Health under Yushchenko, today's adviser to the NSDC Secretary Valery Ivasyuk. He stated the following:

That is, the referendum of the Crimean Tatars, the share of which is 12% of the total population of the Crimea, we can discuss, and the all-Crimean was initially declared illegal and illegitimate.

Speaking of honesty and truth. 16 February 2001 of the year Valeriy Petrovich Ivasyuk, at that time an expert of the Verkhovna Rada of Ukraine Commission, which investigated the case of the disappearance of a journalist George Gongadze, filed a petition for political asylum in the UK. Then, together with Valery Petrovich, 3 million euros, which were allocated to the National Committee on AIDS, which Ivasyuk headed for many years, almost completely disappeared. The application for asylum was filed by him on the basis of his alleged prosecution in the Gongadze case, and he did not apply to any law enforcement agencies.

You can independently find similar stories in almost any member of today's professional government.

With the exception of those whose merits consist so far only in the fact that they brought up tires or firewood on the Maidan, and who have not yet had time to demonstrate their other best qualities.

I do not think that they will surprise us with something extraordinary for Ukraine.