Russia and Ukraine, and all the other republics of the former USSR are colonies of the USA 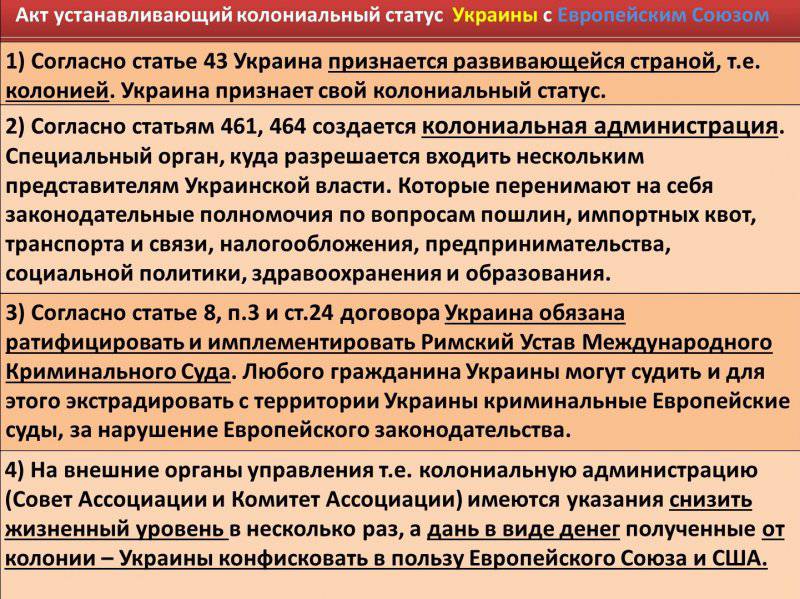 A colony is a dependent territory under the authority of a foreign state (metropolis), without independent political and economic power, managed on the basis of a special regime.


Since 1991, the media, public figures and politicians have formed the point of view that Ukraine is an independent state, and the reason for the poor standard of living of the overwhelming number of citizens in stupid or corrupt officials and bad laws. In fact, everything is so, but this is only the tip of the iceberg. In order to dig deeper and see the whole picture, you need to go back a little to history.

Almost immediately after the victory over Nazi Germany in 1946, Ukraine, being a fairly independent republic (had its own constitution and place in the UN), being part of the Union of Soviet Socialist Republics, entered the Cold War, which began between the capitalist and socialist camps.

The US government's top priority was to achieve the full military superiority of the Americans over the Russians. The United States and its NATO allies in the NATO bloc began implementing their policies as early as 1947 by introducing a whole system of restrictive and prohibitive measures for the USSR in the financial and commercial spheres. In short, America wanted to defeat the Soviet Union economically. Which was finally achieved. The Cold War ended on July 1 on Prague 1991 with the signing of the Protocol on the complete cessation of the Warsaw Pact, concluded between the socialist countries.

But if the Cold War was won by the United States and its allies, then the USSR, and therefore Ukraine, which was part of the Soviet Union, lost it. This is where the most interesting thing begins, which is not generally accepted in the media. The essence of the war lies not only in defeating the enemy, but also in subordinating the losers to its political will and forcing it to pay tribute (reparation, indemnity), that is, material and monetary compensation in the form of regular system payments in any form convenient to the winner.
It happened with the USSR. The Soviet Union was divided into “independent states,” in which Western advisers, under the control of the CIA, began to actively form governments and the main vector of transformation — the transformation of a superpower into 15-operated neo-colonies. But this was not presented to the public as a result of defeat, but as a victory for democracy and the struggle for the independence of the peoples oppressed by the totalitarian Soviet power.

But dismemberment did not stop. Efficient operation and management implied structural reforms and the creation of management mechanisms and the collection of tribute payments in a modern form. Structural reforms ensured the almost complete destruction of science and high-tech industries and the transformation of Ukraine into a supplier of resources, products with low added value and cheap labor. Moreover, conditions in the form of high interest rates on loans and low barrage customs duties were maliciously created inside Ukraine, under which it is impossible to restore or create large-scale high-tech enterprises from scratch.

In order to turn these anti-people transformations, it was necessary to adopt a number of fundamental laws, transfer strategic enterprises to private ownership of a handful of loyal “businessmen” to the west and provide informational cover for the whole business. All this was done by forming the five main instruments (mechanisms) of external control of Ukraine. In this article we mention them briefly, and in the future we plan to write separate analytical articles on each of them:

Managed political elite and direct agents of influence: The vast majority of high-ranking officials are involved in the plundering of state property and keep their money in Western banks. Despite the official concern of the White House about the high level of Ukrainian corruption, in fact, they are completely satisfied with it, as it allows the US State Department and the CIA to control the entire political and economic elite in Ukraine. In case of refusal to cooperate and comply with the requirements of the United States, the Americans can block the foreign accounts of any Ukrainian official, and when the opportunity arises, simply arrest, as happened with Pavel Lazarenko. Separately, it should be mentioned that many Ukrainian officials and politicians are direct agents of the United States, for example, Yushchenko, Pinzenyk, Rybachuk and others.

The supranational Bank of Ukraine: As a result of the large-scale monetary reform at the beginning of 90-s, the NBU from the state bank, which was supposed to issue money in the amount necessary for the Ukrainian economy for its development, turned into a practically uncontrolled government exchange office that can only issue hryvnia buy-back of reserve currency (mainly dollar or euro) at the interbank currency exchange. Thus, the financial system of Ukraine, and hence its economy, has become completely dependent on foreign exchange earnings, foreign loans and investments. This system, which was first introduced by Britain in the 1849 year to improve the efficiency of exploitation of its colonies, is called the “currency board”. The introduction of this system in Ukraine resulted in huge inflation, high interest rates, and the lack of opportunities for citizens and enterprises to get cheap loans for a long time (more than 10 years) within Ukraine. The consequence of this artificial restriction on the development of the economy of Ukraine was the almost complete destruction of large high-tech enterprises requiring “long and cheap” credit resources. You can learn more about the work of the NBU in an interview with Sergey Yaremenko. We recommend watching the lectures of Evgeny Fedorov and Valentina Katasonov on the system of the currency committee.

Non-Ukrainian business: In Ukraine, there is not a single Ukrainian oligarch or owner of a large business. Despite the fact that most of them are born on the territory of modern Ukraine and even call themselves Ukrainians, many of them have second citizenship or live with their families in England, Israel or Western Europe. But the main problem is not even that they do not perceive Ukraine as their homeland, and that they treat it as a territory where they temporarily earn money. The main problem is that their entire business is registered offshore, which means that it is not in Ukrainian jurisdiction. Moreover, it is not known for certain who actually is the true owner of the leading Ukrainian enterprises. For example, when investigating the Khodorkovsky case in Russia, it turned out that the ultimate "beneficiary" of Yukos was not Khodorkovsky, but Jacob Rothschild. Naturally, in such a situation, the “Ukrainian” business elite, like Ukrainian officials, is completely dependent on the will of the United States, otherwise they risk losing their bills, real estate, and in some cases freedom. Also, due to the fact that the NBU was deprived of the right to issue for the needs of the economy, Ukrainian business is forced to borrow money for its development from Western financial institutions, and, therefore, it becomes bound up with “European values” hand and foot.

Non-governmental organizations (NGOs): For the effective management of the occupied territory, a network of organizations that receive funding directly or indirectly from the budget of the United States and its allies - the countries of Western Europe, following the instructions of their sponsors-owners, has been created. Examples of such NGOs operating through foreign grants are CHESNO, Stop Censorship, OPORA, and others. Theoretically, such organizations may well exist and benefit Ukraine, but in practice, Ukrainian grantees are involved in political influence on public opinion, manipulation with sociological research and any other actions aimed at undermining the remnants of the state sovereignty of Ukraine. .

In order to approximately imagine the volume of funding for NGOs, you can take the example of Russia, where the State Duma obligated NGOs to account for funding received from abroad. The first data obtained showed that the average amount of grants received by Russian NGOs is approximately 3 billion dollars per year. Dividing this figure into 5 or 10, it will be possible to estimate the approximate amount of funding for NGOs in Ukraine. You can learn more about the activities of grantees in Ukraine from an interview with Vladimir Skachko.

It should be noted that sometimes the US government does not even use intermediaries in the form of NGOs, but rather finances programs of interest to them directly from the budget of its embassy in Ukraine. For example, a special fund of the US Embassy is a permanent sponsor of the LGBT community in Ukraine.

The media disinformation: Information cover the external control of Ukraine is carried out directly through the media. Due to the fact that a rating system was introduced in Ukraine, the media was filled with low-quality information aimed at attracting maximum attention. As a result, the number of cognitive and intellectual programs is constantly being reduced in favor of a primitive reality show. Special attention should be coverage of the political processes in Ukraine. Due to the fact that none of the Ukrainian elite and our overseas owners are not interested in showing the real situation in the country to the citizens of Ukraine, there is a most severe political censorship on the Ukrainian TV channels and other mass media, including the Internet. On 95%, the broadcast is filled with either politicians and experts agitating for the liberal European vector of Ukraine’s development, or propaganda of nationalist ideology with the main slogans “Ukraine is not Russia” and “Get the view of Moscow”. This is despite the fact that at least 40% of Ukrainian citizens support the reunification of Ukraine with the rest of Russia, at least within the framework of the Customs Union.

Currently, the main Ukrainian media are in the hands of the 4 oligarchs: Pinchuk, Akhmetov, Kolomoisky and Firtash. There are also a number of "opposition" media, which are funded by American foundations and non-governmental organizations (Ukrainska Pravda, Radio Liberty) and are the mouthpiece of American propaganda in Ukraine. Therefore, there can be no talk of independence or objectivity of the Ukrainian media. As a result, the entire information space of Ukraine is controlled by the United States, either directly through "its" Ukrainian media, or indirectly through pressure on Ukrainian oligarchs.

The invader or the colonizer has a very simple logic: the colony will pay tribute indefinitely - until it is completely looted or until the people in the colony rises to fight the invader and expel him from their land. It is useless to sit and hope that the situation in Ukraine will become better due to any kind of government reforms that we recommend (read, impose) the United States or Europe. Since our overseas masters and their European vassals-allies in every way impede any attempts to restore the real independence of our country, and in every way support even greater weakening of state sovereignty and increased colonial exploitation of Ukraine, posing as victories for democracy, liberalizing the economy and effective market reforms.

The People’s Liberation Movement has the task of liberating Ukraine from occupation and restoring the state sovereignty of our Motherland.http://ukrnod.org/

Ctrl Enter
Noticed oshЫbku Highlight text and press. Ctrl + Enter
We are
The world we leave, the world we enter, and the world between themAbout Stalin and Khrushchev
Military Reviewin Yandex News
Military Reviewin Google News
189 comments
Information
Dear reader, to leave comments on the publication, you must sign in.