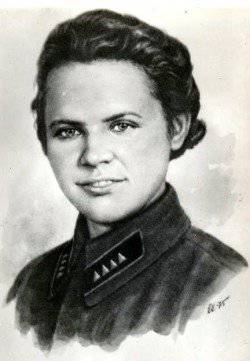 15 March marks 90 since the birth of the legendary tank woman and writer. Irina went to the front when she was seventeen - in the summer of 1941, immediately after graduation. More precisely, not gone, and pulled out! With great difficulty she managed to persuade the responsible party comrade to give her permission to put on her military uniform ...


Levchenko was among the sandwiches who arrived at the headquarters of the 28 Army, reflecting the fierce attacks of the Germans near Smolensk. In those days, she wrote to her mother: “I received a baptism of fire last night. They brought several wounded and instructed me to bandage them ... Frankly, the sight of large wounds is not a scratch, like at home, very scary. ”

Later she had to assist the fighters already on the battlefield. When the division was encircled, Irina managed to smuggle more than one hundred and fifty soldiers and officers to the rear. “If it were not for this will of the heart,” Levchenko later recalled, “who led the girls to the orderlies ... volunteers, how many soldiers the soldiers would return home, how many unknown graves would add to the fact that with milestones of loss and courage they paved the way to Victory.”

She constantly had to be in the thick of battle, under hurricane enemy fire. When Tanks walked in a deployed formation, the medical instructor ran after them and, if the car caught fire, climbed onto the armor, opened the hatch and pulled out the wounded. Not every man could do it, but a fragile girl, even more so. But at such moments she became a hero ...

In another letter to her mother, Irina recalled the next battle in which she happened to take part: “... It fired and bombed everything that could only shoot and bomb. Machines burned, bullets whistled, shells exploded ... I always tied up the wounded right under the bullets ... I was in battle for about five days and left completely unscathed. So while I'm lucky. What will happen next - I do not know.

In the battles on the Kerch Peninsula, Irina Levchenko rendered medical assistance to three dozen wounded and evacuated almost the same from the battlefield. But that's not all - she managed to capture the Romanian soldier with a machine gun!

This was not the only "trophy" of Irina. In another battle, Levchenko caught the enemy infantry off guard, and he, resisting, tried to shoot her. But Irina beat him, and a bullet hit the German in the shoulder. Then this captive themselves did the dressing ...
By the way, she often had to provide first aid and enemies.

Once, when Irina was giving an injection to another prisoner, he unexpectedly hit her. From the pain, surprise and resentment for a minute the girl's head clouded. “The SS man looked me straight in the eyes and laughed,” Levchenko recalled. - Rabies overwhelmed by an uncontrollable wave of consciousness.

- You are a scoundrel, you know, a scoundrel! You cannot reach the feeling of simple gratitude! You must be crushed mercilessly, but you will live, we will not shoot the prisoners, otherwise I would have shot you myself! After all, like you, no one needs!

I choked on the words and twisted in front of his nose with a clenched fist smeared with his own blood. Fear surged up in the SS man’s eyes, and this fear sobered me up ... ”

War is insidious. “Something very big and terrible struck from the starboard, the car was thrown up, or there was a ring all around, or it was in my ears, I did not have time to figure it out; I saw a bright light for a moment, then it became dark and smoky, sipped the bitter air and lost consciousness, ”she recalled.

Levchenko woke up in a trench, feeling a dull pain. I heard with difficulty, I did not want to think about anything. For a long time she couldn’t understand what was wrong with her, why the blood had filled her overcoat, why her hands ache so much ...

Irina was in the hospital and only miraculously escaped the amputation of her right hand. After treatment, the medical commission decided: to remove Levchenko I.N. from military registration. But where there! The girl already had a cheeky dream of becoming a tankman. Before the war, Irina, like many young people, dreamed of becoming a pilot. But during the war, everything changed: “I was always drawn to the machines. But now in the tanks I saw not just a car, but the personification of the combat power of my country. To fight in a tank unit, to be a tanker means to fight in the main, decisive direction. So it seemed to me then, so it seems now. ”

Daily visits to the Main Armored Directorate began, where Irina was received by various commanders.

For representatives of the stronger sex to become a tanker was not a problem, but for women ... For a long time, Levchenko’s decision came across a wall of incomprehension — she was listened carefully, but every time the conversation ended with the same words: “Girls don't take a tank school, this is service - purely masculine. Excuse me…".

However, persistent Irina reached the Deputy Commissar of Defense of the USSR, Lieutenant General Yakov Fedorenko. It was he who finally allowed her to enroll in a tank school.

In the 1943 year, after passing accelerated courses, Levchenko again went to the front. And she got to the same places where she, together with her fellow soldiers, retreated in the first months of the war. “Past the village, where in the fall of forty-one the good scholar grandfather-beekeeper treated us with honey, I could not drive. The car was gone, and I wandered around the old apiary for a long time. The grandfather of the beekeeper was gone: the Gestaps executed him for his connection with the partisans ... The Nazis plundered the apiary. The garden is half burned. The crippled apples and pears stretched the charred boughs to the fighters passing along the road, as if complaining: “Look, relatives, what they did to us!” The mighty oak survived; it rustled with leaves, as a reliable support, covering with its branches both apple trees and half-rotten decks of overturned hives, and two thin aspen trees with trembling leaves. ”

... A few years after the war, Irina Nikolaevna took up the pen. She was not a professional writer, but she was driven by a desire to tell about the time of which she was a participant. (By the way, during the Great Patriotic War, only 12 women tankers served in the Soviet army).

Levchenko left us, descendants, several works that give an idea of ​​what war is through the eyes of a simple person, a woman. These are “A Tale of the War Years”, “People, Storm, Victory ...”, “Commander's Daughter”, “Tank Mistress”, “Happy” and others.

“I knew Irina Nikolaevna Levchenko well, I met her at literary evenings, on creative trips,” recalled the famous Soviet writer Yury Yakovlev. - But for some reason I remember the meeting in the Kremlin at the New Year tree. We walked alongside her in the hall, carefully making our way among the children. At times, I gradually looked at my companion, and I was struck by the joyful, childlike brilliance of her eyes. And I thought how beautiful and clean a person must be in order to preserve such a childish perception of the holiday. And how much you need to love life, children, the Motherland, in order to go the way that Irina walked. ”

Levchenko’s works are no less, and perhaps more valuable, than the memoirs of other famous military leaders. The war was far from them, they spent it in headquarters, on maps, developing strategic plans. And the fighters who fled to the attack or shot from the enemy in the trenches and dugouts, looked into the face of death. Among them was Irina.

Following the poet, she could repeat:

"It seems to me that I am a magnet,
that I draw mines.
Gap -
and the lieutenant wheezes.
And death passes by again ... "

Irina Levchenko had to go through a lot of front-line roads. She became the first woman - commander of a tank platoon. The crew of the T-60, which she led, participated in the assault on Smolensk, liberated the Carpathians, Romania, Bulgaria, Hungary. She ended the war near Berlin.

“The command and political department of part No. 32456 congratulates you on receiving your daughter Irina Levchenko’s Order of the Red Star for courage, bravery and heroism ... Your daughter is skillfully fighting with the enemy, and you can be proud of such a daughter!” These are the lines from the letter the mother received Irina - Lydia Sergeyevna.

Many years later, Levchenko will remember how her tank was going through the saved cities, and the residents of Sofia littered the car with flowers. A few years later she was honored with an award weapons Bulgarian Defense Minister General Dobri Djurov ...

Irina returned home when the war was still going on. As soon as she got off the train in Moscow at the Kursk railway station, she called home from a telephone booth.

“Forgetting that I was surrounded by strangers, agitated by the sound of my own voice, I screamed like a little:
- Grandma, my good, my dear ... it's me!
- What is your grandmother? - The voice was resolute and somewhat angry.
- How what? For twenty years, as a grandmother. Grandma, it's me, I, Ira! Your Arisha ... has arrived.
At the other end of the second they were silent, then gasped loudly:
- Ira! Girl, come, where are you? Where? - Grandma choked with words and joyful tears. - Lida, Lida! Ira arrived! - She called her mother.
Mom picked up the phone, but, apart from disjointed exclamations and joyful sobs, she was not capable of anything ... "

For feats committed during the years of the Great Patriotic War, Irina Levchenko was awarded three orders of the Red Star, ten medals. She was awarded the Golden Star of the Hero of the Soviet Union after the war, on the eve of the 20 anniversary of the Great Victory.

In 1961, the International Committee of the Red Cross awarded Levchenko the Florence Nightingale medal for saving the lives of the wounded on the battlefield. The price of this award, established in honor of the heroic English sister of mercy, is well known in many countries of the world. Since its establishment — more than a hundred years ago — only a few have been honored to receive it.