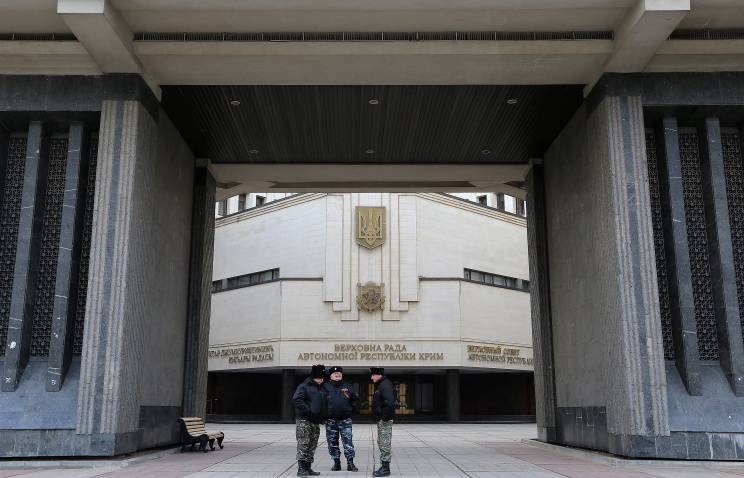 The Crimean Parliament has turned over into the ownership of the republic the assets of Chernomorneftegaz, Ukrtransgaz and the Feodosiya oil supply enterprise located on the peninsula. According to the press service of the State Council, the relevant decision was adopted at an extraordinary plenary meeting.


"To establish that the property of the Republic of Crimea is ... movable and immovable property of public joint stock company" State Joint Stock Company "Chernomorneftegaz", its continental shelf, exclusive (maritime) economic zone, which is not included in the authorized capital ("Chernomorneftegaz"), including state (Ukraine) property transferred to it for use and located on balance and off-balance sheet accounting, ”reads the resolution“ On the issues of the energy security of the Republic of Crimea ”.

A similar decision was made regarding movable and immovable property "Ukrtransgaz" in the Crimea.

In addition, the decree established that the property of the Crimea is the Crimean assets of the state "Theodosia enterprise for the supply of petroleum products."

CHERNOMORNEFTEGAZ
It conducts the extraction and exploration of hydrocarbons on the shelf of the Black and Azov Seas, and also develops 2 gas condensate, 7 gas and 1 oil fields on the peninsula. In total, the company’s balance sheet contains 17 deposits, the company also owns a gas transmission system and an underground gas storage facility.

The nationalization of these enterprises was carried out "in order to ensure environmental and energy security, create conditions for organizing the production, storage and transportation of hydrocarbons in the territory of the Republic of Crimea, supplying residents of Crimea with energy resources, and uninterrupted operation of life support facilities".

Crimean authorities are planning to nationalize Chernomorneftegaz, the railway and departmental sanatoriums of Ukraine on the peninsula, First Deputy Prime Minister of Crimea Rustam Temirgaliyev told 12 in March.

"This is about the nationalization of the company Chernomorneftegaz and all its assets, including the towers that produce fuel on the shelf away from the Crimean coast. This company will be recognized as a republican company," said First Deputy Prime Minister of the Crimea Rustam Temirgaliyev.

According to him, the republican property will also recognize the railway on the peninsula and a number of sanatorium facilities that belong to Ukrainian ministries and departments.

"The property of private companies and individuals will remain in their ownership, our only request is to re-register rights under Russian law," said the Deputy Prime Minister.

Ctrl Enter
Noticed oshЫbku Highlight text and press. Ctrl + Enter
We are
The action “Military service under the contract is your choice!” In Rostov-on-Don: future contract servicemen, exhibitions and “Russian Knights”
Military Reviewin Yandex News
Military Reviewin Google News
106 comments
Information
Dear reader, to leave comments on the publication, you must sign in.