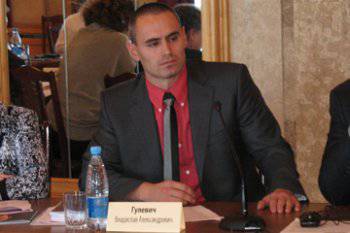 In February, a coup d'état took place in Ukraine, as a result of which President Viktor Yanukovych was removed from power. The United States and the European Union welcomed the coming to power of the pro-Western opposition, relying on the armed forces of the ultra-right, who took an active part in the "Euromaidan", and after the overthrow of the president - in racketeering and terror against their ideological opponents. A number of Ukrainian public figures, after repeated threats to their address, fearing for the lives of their relatives, left their homes with their families and went abroad. What happened in Ukraine and why it became necessary to take the family to Siberia on March 15 in an interview with a REGNUM correspondent was told by a Ukrainian political analyst and analyst at the Center for Conservative Studies in the sociology of international relations of Moscow State University. Lomonosov Vladislav Gulevich.


REGNUM: What is happening in Ukraine and what is waiting for it?

Another aspect is the economic turmoil accompanying Ukraine throughout the years of its independent existence. Low wages, high prices, unemployment - all this brought the people to the point that they readily spoke out against the incumbent president, believing the next colorful promises about the coming "golden age." There was a link between the passive, in its essence, average statistical man in the street and passionate ultraradical groups that determined the appearance of Euromaidan. The average protester obediently trudged over for the more assertive and active, and now not only visitors from Western Ukrainian regions, but submarines from other regions, stood over Euromaidan with Bandera banners.

Ukraine is now experiencing a surge of anti-Russian hysteria. A bad dancer is always hampered by something, and the new authorities need to find an external object to which all the failures and misses can be attributed. Russia is traditionally elected this object. Anti-Russian squeals and grunting are heard from all the cracks: in social networks, on television, radio, in the press. Those who did not support Euromaidan now have a hard time. They are looked upon as enemies. This happened at the end of 1980, when Ukrainian bureaucrats diligently cultivated nationalistic sentiments in society to secede from the USSR: a neighbor cursed with a neighbor, a husband with his wife, and children with his parents.

The new authorities do not control right-wing radical groups, and such formations themselves decide with whom to join a political union, and with whom to fight. Euro-usurpers cannot ensure the safety of their own citizens. The former "Euromaidan laborers" who have switched from revolution to crime are hanging around Kiev. A growing number of crimes with the use of firearms weapons etc.

At the same time, the scope of the presence of the Right Sector on the Ukrainian political scene is expanding. Media reports on the inclusion of members of this neo-Nazi group in the Armed Forces of Ukraine.

Externally, life in Ukraine goes on. There are no interruptions in the products and provision of personal services, but, unfortunately, all the problems are still ahead.

REGNUM: How did you find yourself in Russia?

In those areas where the "Euro-democratic forces" won, repressions were launched against those who occupied active life positions during the Euromaidan clock and did not put up with the arrival of the last Bandera and Shukhevych in Kiev. For the average man, far from politics, everything looks calm. No one arrests bakers, salesmen or taxi drivers, but quietly cleansing the information field from the most visible and active journalists, political scientists, and “anti-Maidnovian” publicists. Such people are punished simply for their position. Not for any of their actions, but for their opinion, and for the fact that they dared to have an opinion that is different from the majority opinion of Ukrainian television. They are threatened with either violence or arrest. There were slogans about the continuation of the revolution, about the need not to stop the pursuit of its enemies. The prosecutor general appointed a representative of the right-wing “Freedom”, the head of the Ministry of Internal Affairs - a representative of the “Batkivshchyna” party, to whom right-wing abscesses are also not alien. So, expressing your opinion in Ukraine has become an insecure affair.

Seven days by car, and my family was far from the “euromaid” Ukraine - in the snowy Siberia, in my small homeland. But I am not indifferent to watch the neo-Nazi sabbath occurring in Ukraine. Of the three Eastern Slavic republics (Russia, Ukraine, Belarus), Ukraine lives the worst of all, and, at the same time, is the only republic that has followed the path of nationalism. Ukraine occupies an unacceptable second place after the Baltic states in the degree of glorification of former SS soldiers and Wehrmacht warriors. Aspiring SS men marching through the streets of Latvia, Estonia and more in Ukraine. You can not tolerate this.

Ctrl Enter
Noticed oshЫbku Highlight text and press. Ctrl + Enter
We are
What you didn't want to know about EnglandWhy Mikhail Lomonosov was sentenced to death?
Military Reviewin Yandex News
Military Reviewin Google News
12 comments
Information
Dear reader, to leave comments on the publication, you must sign in.