Yu.Krupnov: “There is a total bureaucratic degeneration” 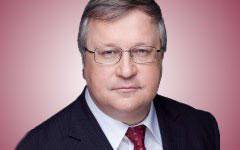 
The head of the Federal Agency for the Affairs of the Commonwealth of Independent States, Compatriots Living Abroad and International Humanitarian Cooperation (Rossotrudnichestvo) Konstantin Kosachev gave an interview to Vedomosti, where he summed up most of the disappointing results of his structure, which were quite badly managed to retouch “Yes, but ...”, “but we do not care ...”, “despite this ...” and other rhetorical anesthesia.

The main question - who needs such “rossotrudnichestvo”, is hung in the air in silent reproach. The confession took place, can I continue working?

KM.RU political analyst, chairman of the supervisory board of the Institute for Demography, Migration and Regional Development Yury Krupnov presented his assessment of the work of Russia in the Ukrainian sector:

“In fact, we should talk about the absolute failure of our work in Ukraine and seriously ask ourselves what lies at its core, what is the root of the problem.” But let's at least examine what lies on the surface: the very concept of “soft power” has been used by us for the past two years, while in the USA it has been around for twenty years, no less.

The repetition of the “backs” of American and Anglo-Saxon geopolitics only emphasizes its complete absence in our country, as well as the absence of a coherent ideology that would allow us to effectively defend our interests in the world.

We must honestly realize that there is total bureaucratic degeneration, which could not escape including Rossotrudnichestvo. At the same time, whatever is done in the domestic and foreign arenas, whatever toolkit is involved - all this is done, ultimately, in the interests of the oligarchs, who only annoy people and clearly do not strengthen the overall authority of the authorities in the eyes of the people.

All the events that took place in Ukraine over the past 10 years, starting with the well-known Orange Revolution, are only a visible embodiment of the failing work of our "Mordodels" -polittekhnologov, for which the government allocated and allocated enormous, huge budget money. These mordobily actually manage, among other things, Rossotrudnichestvo and other structures, since behind this there are large financial flows, the development of which has become an end in itself.

Our opponents have serious strategic planning, but we do not

Yes, Russia's position on the Crimea is brilliant, yes, it is definitely a victory. But all this has nothing to do with either the policy of “soft power” or the activities of “mordodelov.” All this is connected solely with the correct tactical and situational decisions of Putin, as well as the process of Russian self-determination in the Crimea.

But if you look at the situation as a whole, then we must clearly understand that the Crimea with two million inhabitants is not such a big “consolation prize” against the background of the loss of Ukraine’s 43-million remains, and, in the long run, the West’s fortifications Ukraine is not only soft power, but also tough. I mean the almost inevitable NATO bases on the border with the Belgorod, Rostov, Voronezh regions ...

All the endless lamentations of our political scientists that the terrible bad West has invested 5 billions of dollars in non-profit organizations in Ukraine and thereby predetermined what is happening there now are simply ridiculous. What are these 5 billions when we had to invest in pro-Russian organizations not 5, but all 500 billions of dollars ?! But no one did. And all this talk about the bad West, which prevents us from fully supporting Ukraine, just eloquently shows that our opponents have serious strategic planning, but we don’t.