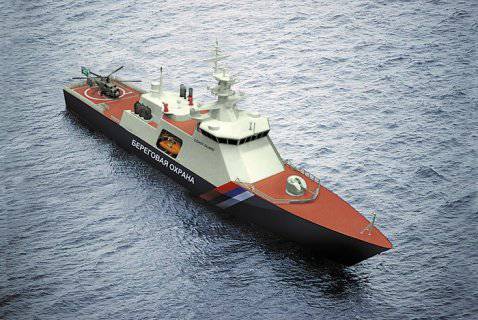 According to the commander-in-chief of the Russian Navy, Admiral Viktor Chirkov, the fleet refused to create a corvette for the protection of the water area (OVR), and instead it is planned to build patrol ships (according to the international classification - offshore patrol vessel or OPV).

IAD ships are designed to protect and ensure safe navigation in the areas of naval bases and in the adjacent waters. These include small anti-submarine (IPC) and rocket ships (MRK), missile boats (RCA), base and roadster minesweepers. Simply put, they stand guard over the coast of the country.

The Corvette OVR with a displacement of less than 2 thousand tons, for the development of a draft project of which last year 475 thousand rubles were allocated from the budget, was to replace outdated IPC of 1124М and 1331М projects, IRN of 12341 project, РКА 12411 project in the future. and minesweepers. It is clear that with a sufficiently limited displacement, the OVR corvettes could not simultaneously carry strike, anti-submarine and mine-carrying weapons. Therefore, it was provided for its modular container placement. Depending on the tasks performed, the ships had to change modules.

With all the seeming appeal of this solution, this is a difficult and costly affair.

The first to apply such technology were Danes on 14 ships of the Flyvefisken type, built on the Standard Flex 300 program, but as a result, due to the high operating costs, these relatively new combat units were abandoned.

The Americans, who intended to deploy them in littoral warships of the Freedom and Independence types, also burned themselves on the modular container system. These doroguschih high-speed ships with a displacement of about 3000 t come into the US Navy, but the modules for them are still being created, and they will cost very expensive. Not to mention that any missile boat in the coastal zone can easily cope with these masterpieces of shipbuilding art.

It would be foolish to completely dismiss the modular-container armament system, but first you need to create these modules, test and work them out, and then deploy them on ships. That is why the refusal to develop an IAD corvette seems reasonable. But what instead of him?

WHO WILL PROTECT THE COAST?

According to Admiral Viktor Chirkov, the tasks of the OVR ships are currently carried out by coastal surveillance equipment, stationary sonar stations and coastal missile and artillery troops, as well as anti-submarine and shock aviation. In theory, with some stretch, you can agree with the commander in chief. But, alas, the Russian Navy has nothing of the kind, or is available in limited quantities. Otherwise, to ensure the safety of the Sochi Olympics from the sea, it would not be necessary to pull together about 20 ships of the Navy and Coast Guard (BOKHR), not counting dozens of FSB special forces boats, fleet and the Ministry of Internal Affairs, the police, the FSO, as well as the Ministry of Emergencies and Rosmorport. The missile cruiser "Moscow" and the patrol ship "Inquisitive" took part in this layered operation. But the main burden of service on the part of the Black Sea Fleet fell on the share of anti-sabotage boats of the Grachonok type, MPK Aleksandrovets and Muromets, as well as RTOs, RCAs and minesweepers, which belong to the ships of the water area protection. But the coastline of the Russian Federation is not limited to 100 kilometers of the Sochi coast.

After the end of the Cold War, it became known that NATO naval experts, based on numerous exercises and staff games, concluded that in the event of war with the USSR, it would take several hours for the destruction of large surface ships of the Soviet fleet in the seas and oceans. However, the NATO Navy was completely helpless in the near-sea zone. The ships of the OVR of the Navy of the USSR and the countries of the Warsaw Pact, supported by coastal aviation, coastal missile and artillery units, even when staging minefields tightly closed the approaches to the shores of their countries, leaving no chance for the enemy to win.

What has changed since then? The few remaining OVR ships built in Soviet times live out their time without waiting for replacement. Coastal attack aviation of the Navy is exhausted, anti-submarine is also in decline. Coastal missile units thinned out. Here is such a bleak picture.

Today our fleet is directed to the ocean. There, according to the commander in chief, patrol ships will soon appear - with less strong armament than surface ships of other classes, but with greater autonomy and versatility. February 26 at the Zelenodolsk plant named after A.M. Gorky hosted the laying of a patrol ship of the 22160 project developed by the Northern Design Bureau. Its displacement is about 1500 t, length - 94 m, width 14 m, draft - 3,4 m. The crew is small - about 80 people. The main power plant of the ship is a combined diesel-gas turbine power 25 thousand kW, capable of providing the ship with the maximum 30-nodal speed. The cruising range of a ship at an economic speed reaches 6 thousand miles, while autonomy is 60 days. The armament of the ship, of course, is modest: one 57-mm automatic artillery, the Igla MANPADS, anti-sabotage grenade launchers and large-caliber machine guns. In the aft part there is a helipad capable of receiving a Ka-27 helicopter with its storage in a telescopic hangar. Provision is made for a fixed inflatable type interceptor boat. However, other equipment options are possible. The ship also has radio and hydroacoustic weapons, electronic countermeasures.

Experts of the Northern PKB took the platform as the basis of their patrol ship, which was previously offered as a border patrol ship of the oceanic zone, and then in a revised form as a IWR corvette. The Northern PKB has a huge experience in creating surface ships, so there is no doubt that the project of this ship has turned out to be good. Zelenodolsk plant named after AM. Gorky also does not need any special recommendations. At this shipyard in the middle reaches of the Volga, a queue of representatives of power structures is lined up. Shipbuilders of Tatarstan collect ships well and on time. For two years in a row, they hold leadership in the number of combat units transferred to the Russian Navy.

Here I have to apologize to the staff of this company. In the article “38 parrots and three“ rooks ”, published in“ Independent Military Review ”No. 1 from 17.01.14, I pointed out that“ we barely had time for the new year ”to hand over to the fleet two small rocket ships of the 21631“ Buyan-M ”project - "Grad Sviyazhsk" and "Uglich". It turns out, Zelenodolsk plant had. Last December, representatives of the Russian Navy signed acceptance acts, however, naval commanders for some unknown reason vetoed this information.

But back to the patrol ships. Why they are needed by the Russian Navy, which is experiencing a real hunger due to the melting number of full-fledged warships, is unclear. As usual in such cases, refer to foreign experience. Yes, for example, in the Navy of the United Kingdom and the Netherlands there are patrol ships, OPV, according to their classification, which perform the police functions of controlling the exclusive economic zone and waters of their overseas territories, and can also be used to fight pirates. And all because the coast guard forces at the disposal of these countries are only intended to ensure navigational safety in coastal waters, carry out search and rescue operations and combat pollution of the environment.

Usually, border and police tasks, including in Russia, the United States, as well as in most other countries, are assigned to the SEC. Patrol ships carry weak weapons and cannot be counted as combat ships. Why are they to the Russian fleet? Their only reasonable use is training of naval personnel in long voyages. But for this it is better to build new training ships, since the old ones are already worn out to the extreme.

It seems that the command at the expense of cheap and of little use to the fleet of ersatz ships intends to artificially "inflate" the numerical composition of the Navy. Here you can only shrug. Then they are telling us about the need for nuclear aircraft carriers with a "space bias", then they are going to build pseudo-combat units. Here, our admirals remind one of the heroines of the film “The Pokrovsky Gates,” which said about itself: “I am all so absurd, all so angular, so contradictory, all.” It seems that the Russian naval commanders are plotting a course in thick fog and, not knowing where to go, they work in machines.

But this is only one side of the coin. Let's talk about the other. Suppose a fleet cannot do without patrol ships. Good. But at the same Zelenodolsk plant named after AM. Gorky is building the lead border patrol ship 1 of the 22100 “Ocean” project, with a full displacement of 2700 t, the project of which was developed by the Almaz Central Mortgage Design Bureau. The range of his navigation is 12 000 miles, the navigation area is unlimited. This PCNR, which is planned to be launched this year, can walk in the tropics and arctic waters, overcoming ice up to 80 thickness. See Armament includes 76-mm automatic artillery mounts and heavy machine guns. There is a platform for the take-off and landing of a Ka-27 helicopter, as well as a hangar for its storage. In the stern - a device for launching and lifting onboard inspection boats on the ship’s course. Since the patrol will be in service at sea for a long time, comfortable conditions are provided for the crew.

The question arises: why for different security agencies Russia should build two different ships of the same destination and one class? A lot has been said about the need to optimize and save defense resources, and here frank waste is explicitly allowed. Where do the Military-Industrial Commission, the Ministry of Industry and Trade of the Russian Federation and the Marine Board look?

And here is the time to turn to foreign experience. A few years ago, the Canadian government decided to strengthen the presence of the Maple Leaf Country in the Arctic and build Arctic Navy patrol ships for the Navy and Coast Guard 6 – 8, the prototype of which was taken by the Norwegian icebreaker OPV Svalbard with a displacement of 6375 t. the activities of these ships, all these patrol ships are now planned to build and transfer to the naval forces under its requirements. Here is an example of a state approach.

Today, its implementation should pursue the achievement of obvious goals: protecting the deployment areas of strategic nuclear submarines, defending their bases, ports and shores, countering the deployment of the US global missile defense system in the seas and oceans. All the rest is ambition for which there are not enough resources.