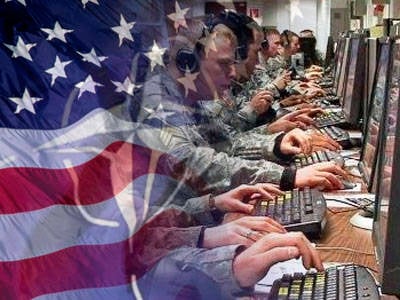 Last week, a number of Russian sites were subjected to hacker attacks. Among them: the site of the President of the Russian Federation and the Bank of Russia. Also reported on the disruption of the websites of the First Channel, the Russia Today TV channel, the Izvestia newspaper, the Rossiyskaya Gazeta newspaper and the Life News online publication. Responsibility for carrying out information sabotage took the Ukrainian hacker group, which calls itself "cyber attack".


For the first time, this team of Internet activists announced 14 in February, creating their group on the Facebook social network and publishing a manifesto. In their first appeal to the citizens of Ukraine, community members promised to use the Internet’s capabilities "within the legal framework" to overthrow the "criminal regime" in Ukraine and ensure "honesty, respect and justice for everyone". Among the reasons that prompted Ukrainian hackers to start their “liberation struggle”, the “almost zero level of legitimacy, fairness and competence of the entire state apparatus in Ukraine”, deceitful Ukrainian media and the low level of culture of many authorized persons were also mentioned.

Less than a month since the creation of the group, as announced goals began to radically diverge from real actions. First, a hacker attack on an Internet resource is a criminal offense, which means that the cyber attack has already gone beyond the legal field. Secondly, at that moment, when the issue of legitimacy, competence and culture of power in Ukraine really became relevant, the “cyber security”, instead of defending the rights of Ukrainians, switched its activity to Russia. A natural question arises: have the Ukrainian media ceased to lie? Or are the pro-fascist views of the new Ukrainian government more conducive to “justice for every man” than the oligarchic regime of Yanukovich?

Of course not. Ukrainian media remained in the hands of the same oligarchs. The nationalist position of the current government is much more dangerous for the people, and the majority of Ukrainians have already managed to feel it. This means that the group of hackers who call themselves “cyber-torny” does not care about ordinary Ukrainians. It is very likely that they themselves are very far from Ukraine.

This is confirmed by the message of the press service of the site of the Crimean referendum referendum2014.org.ua, which also underwent a DDoS attack (an attack on a computer system to bring it to failure). According to experts, the site was attacked from the University of Illinois, located in the cities of Urbana and Champaign in the USA. It was from there, according to Ukrainian computer scientists, that servers were scanned before the attack.

It is noted that in the city of Urbana with a population of 37 thousands of people there are a large number of subnets that significantly exceed the needs of the city. In addition, the city has three airports. It is likely that one of the headquarters of the NSA may be located on its territory.

In addition, social networks actively discuss the regular blocking of links to video materials containing evidence of the actions of foreign mercenaries and snipers during the confrontation on the Maidan. Such censorship is available only to US intelligence agencies that have access to the servers of such giants as Facebook and Google. Mechanisms for conducting special operations using access to these resources were disclosed in detail by former NSA agent Edward Snowden.

The fact that the cyber base serves only as a cover for the American special services, says another Ukrainian group of hackers, calling itself Cyber ​​Berkut. According to data published on their VKontakte page (http://vk.com/kiber.berkut), at the request of the “Kiev junta”, staff of the NATO NATO Cyber ​​Center are working in Ukraine. “The entire color of NATO’s cyber leadership, led by Colonel Arthur Suzikom, arrived in Kiev to help the maydauns,” Ukrainian hackers say, declaring war on the new Kiev neo-fascist nationalist government backed by Washington. This information was confirmed by the Ukrainian Front public movement, reporting that a group of NATO experts had arrived in Kiev to coordinate e-war against Russia. Under the guise of "protecting" the websites of state bodies of Ukraine, this group began a systematic clearing of the Ukrainian Internet from anti-fascist websites, websites of oppositional public organizations, independent mass media, as well as conducting computer attacks on Russian websites, including websites of banks, authorities, mass media information.

In confirmation of the seriousness of its intentions, CyberBerkut 15 March launched an attack on NATO sites. DDoS attacks were launched at nato-pa.int (NATO Parliamentary Assembly), ccdcoe.org (Center of Excellence for Joint Protection against Cyber ​​Threats), and the main website of the nato.int alliance. “We are appealing to NATO cyberbandits:“ Get out of the Ukrainian land! ”- the hackers report says. NATO spokesman Oan Lungesku has already confirmed that there are problems with the services.

It is worth noting that it was CyberBerkut that earlier announced the sensational telephone conversation between EU High Representative for Foreign Affairs and Security Policy Catherine Ashton and Estonian Foreign Minister Urmas Paet. From this record, it became known that the snipers operating on Independence, were hired by opposition leaders.