12 Russian events that cause tension in Finland ("Ilta Sanomat", Finland) 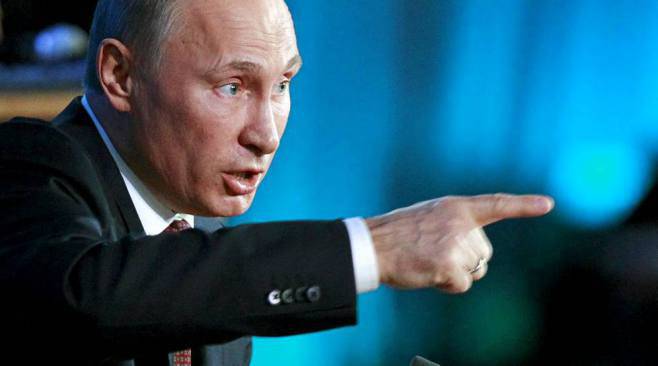 The great-power chauvinism of the strengthened eastern neighbor is increasingly affecting Finland. The Finnish newspaper Ilta-Sanomat compiled a list of events that were most widely discussed in the media. The current Ukrainian crisis has vividly demonstrated Putin’s readiness to defend its interests in neighboring countries.

The slogan or even the main ideology of Putin's new Russia has become the defense of the Russian-speaking, which the Kremlin justifies many of its actions.

On the example of the Ukrainian crisis, it became clear how quickly Russian rhetoric can become harsh. How easily the State Duma or decrees of the state authorities can be used as a lever of pressure both inside and outside the country, not excluding Finland.

The Ukrainian crisis has become a catalyst for the initiation of law in the State Duma of the Russian Federation, which will allow granting citizenship to the Russian-speaking population as a matter of urgency.

These days it has become clear that Russia has expanded its bill in such a way that even the Finns will be able to obtain Russian citizenship as soon as possible. This became possible because Russia intends to urgently issue its passports to the Russian-speaking people who live "in the Russian Empire and in the areas of its interests."

By adopting this bill, Russia considers it necessary to remind the world that the borders of its empire were once different.

The new civil law will mean that more than 70 thousands of Russian-speakers living in Finland will be able to obtain Russian citizenship in an expedited manner if they do not have it. However, this will require renunciation of Finnish citizenship.

In Ukraine, the provision of Russian passports is considered the same trick as in the case of Georgia: when the presence of Russian citizens in South Ossetia was sufficient for Russia to be able to deploy an army there to protect them.

Helsingin Sanomat recalled yesterday that Finland and Russia have an agreement existing with 1992 of the year in which the Russian Federation is guaranteed the right to protect immigrants from Russia who are in Finland.

3. Freezing of foreign assets in Russia

The upper house of the Russian parliament recently announced a law in preparation to freeze the funds of foreign companies operating in Russia.

Chairman of the Federation Council Committee on Constitutional Legislation Andrei Klishas told Izvestia that the law will also apply to private accounts. Speaker of the upper house of parliament Valentina Matvienko said that the law should allow the confiscation of property of foreign companies.

According to Russia, these laws are only a mirror reaction to the intentions of the West to impose sanctions against the Russian Federation. However, the voiced threat of confiscation of property from the Soviet era may further make many Finnish companies more cautious in their relations with Russia.

4. Strengthening the army on the border with Finland

Russia last year modernized its army, and recently organized another military maneuvers on the Karelian Isthmus, near the Finnish border, which Vladimir Putin personally visited and supervised.

The Finnish side was notified of these exercises. However, the news sent from Perkyarvi (Kirillovskoye village) suggests that Karelia is important for Russia strategically, and for Finns nostalgic for Finnish Karelia, it shows that they should not even dream of returning to this area.

In the evening, Russia announced the additional entry of 30 thousand soldiers of the North fleet to the village of Alakurtti, in the area near Salla.

“The protection of Russian speakers” in Finland is still expressed in the enthusiasm of Russia, with which it raises its public about children's disputes in mixed Russian-Finnish families.

In the Russian media, children's disputes are dealt with harshly, and Finland is accused of persecuting Russians. Many facts are deliberately distorted.

6. Criticism of human rights in Finland

Recently, Russia has compiled reports in which it defines the problems of the Russian minority in Finland.

The last report “On the situation with ensuring human rights in the European Union” was prepared at the beginning of the year before the Olympics in Sochi, when the whole world criticized Russia for abusing human rights. This report has sections criticizing Finland’s policies, including for racial discrimination of Russian speakers and for removing children from Russian-speaking parents and transferring them to the care of the authorities.

The report describes the traditional reaction of modern Russia to foreign criticism: the criticism is ignored, the attention of critics is drawn to the fact that they themselves have the same problems.

Earlier in Finland, the scandal about large-scale cyber espionage in the Ministry of Foreign Affairs, in which Russia was one of the suspects, made a lot of noise.

These cases suggest that both Finnish officials and business people should be guided by the assumption that foreign powers, including Russia, can intercept their messages.

8. Proposal for the construction of nuclear power plants

An analysis of events in Ukraine raised the issue of Finland’s energy dependence on Russia and the RF proposal for the construction of a nuclear power plant in Finland.

If the situation turns out that Russia wants to really put pressure on Finland, energy will become the first tool.

However, it is necessary to take into account the fact that the Russians can build an IT complex in terms of ensuring the safety of nuclear power plants in Finland. Everyone remembers the 1980 scandal about the construction of the US embassy building in Moscow, within which Soviet builders installed hidden bugs and turned the embassy into an "eight-story microphone."

9. The politicization of food disputes

Traditionally, Russia in recent years has found defects in food products in those countries with which Russia has political problems.

For example, so many harmful substances were found in Georgian wine that it was forbidden to import it into Russia.

Finnish dairy products are imported into Russia, the purity of which Russia doubted about the same time that relations between countries became tougher due to children's disputes.

10. Arrival of the Kremlin Institute in Helsinki

The sphere of Russian interests in Finland also includes the fact that the Russian Institute for Strategic Studies (RISI) operates in Helsinki, established by the President of the Russian Federation, which is headed by Russian experts of the intelligence services.

The Institute regularly organizes debates on which the views of Finnish Russophobes are discussed. Associate Professor Johan Beckman, who earlier acted as an advocate for Russian mothers, now represents the current RISS in the Nordic countries.

Russia has already supported the idea in which the country's historiography and its teaching should be uniform. Kremlin’s goal is to prevent distortion storiesbut, according to critics, this is an attempt to “tune” modern Russian history in support of the current authorities.

For Finland, what is important is how the Russians will be told about the Winter War.

The departure of the Finnish hockey team “Jokerit” to the Continental Hockey League is one example of the establishment of “soft” world domination under the “Putin’s plan”.

For Russia, hockey is a Kremlin project that aims to enhance the image of Russia. The biggest supporters of the development of the KHL are the same billionaires who are friends of Putin and the Kremlin’s political support column.

However, it is possible that exactly hockey, through the united Jokerit, will become one of the important new enterprises that will unite the Finns and Russians in the good sense of the word.

Ctrl Enter
Noticed oshЫbku Highlight text and press. Ctrl + Enter
We are
Finland and Sweden: who will last more than a week against Russia?Finland: forward to the Russian bear?
Military Reviewin Yandex News
Military Reviewin Google News
41 comment
Information
Dear reader, to leave comments on the publication, you must sign in.