President of the globe decided to punish Russia

March 18 2014
381
Speaking by telephone with Vladimir Putin, Barack Obama said that the results of the Crimean referendum will never be recognized either by the United States or the international community. Thus, Washington has once again made it clear to Russia, where the very same “international community” is written, on whose behalf Western democracy is broadcasting. 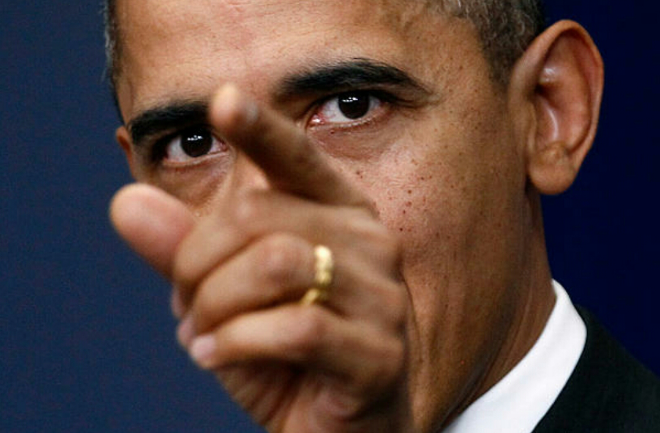 Basically, no surprise in the statement president of the globe President Obama is not. Even before the referendum in Crimea, the White House announced that it would not recognize the plebiscite as legitimate, since such a vote contradicts the Ukrainian constitution.

The White House believes that the intervention of one country in the sovereign affairs of another country is unacceptable. A position typical of those who profess double standards and worships the golden calf, that is, the dollar. The United States can crawl into the affairs of Syria, Libya, Iraq, Afghanistan, the "Republic of Kosovo", the former Sudan, and the same Ukraine, encouraging "euromaidan", and the fool Russia should sit quietly on its oil needle and not rip off, not worse will be.

“The results of the referendum in Crimea will never be recognized by the United States and the international community,” the White House press service quoted Obama as saying. Obama himself called Putin to talk about the Crimean referendum.

The president of Russia has his own opinion about the March Xenx plebiscite. V. Putin explained B. Kh. Obama that the referendum in Crimea was absolutely legitimate, and “its implementation fully complied with international law and the UN Charter and took into account, in particular, the well-known Kosovo precedent. At the same time, the inhabitants of the peninsula were guaranteed the possibility of free will and self-determination. ”

Then the conversation turned into a well-known diplomatic channel: the presidents talked about the need to stabilize the situation in Ukraine.

It should be recalled that after summing up the results of the Crimean referendum, the media spread the official statement of the White House, which stated that the United States rejects the results of the plebiscite, and Russia's actions are considered "dangerous and destabilizing." This is where the tricky statement of B.H. Obama about the "stabilization" of Ukraine came from.

In addition, in a statement, the White House called on its allies and other countries (apparently not from among the allies) to force Russia to answer for its actions, that is, to take certain measures against Moscow.

The White House said: "The United States has firmly supported the independence, sovereignty and territorial integrity of Ukraine since its proclamation in the 1991 year." In the document, Washington rejected the Crimean "referendum" (quotation marks of the original), since it "contradicts the constitution of Ukraine."

According to the American rulers, the plebiscite was held in an atmosphere of "threats and intimidation because of the Russian military intervention violating international law."

Hence the “measures” aimed at preserving the integrity of the “Ukrainian territory”: “We urge all members of the international community to continue their condemnation of such actions, take concrete steps to respond and jointly support the Ukrainian people and the integrity of the Ukrainian territory and its sovereignty. We live in this century, long gone those days when the world community would calmly look at how one country seizes the territory of another by force. ”

Russia's actions were called "dangerous and destabilizing." That they are such, recognized the UN Security Council on the appropriate vote. And only Russia opposed it, according to the text.

“... As the United States and our allies made clear, Russia will have to pay dearly for military intervention and violation of international law, not only because the United States and its allies will take measures in its relation, but also as a result of their own destabilizing actions”, broadcasts the White House.

Among the first to speak was the British Foreign Secretary, William Hague. Regarding the Crimean plebiscite, he expressed unequivocally: “This is a mockery of genuinely democratic procedures.” He said this on the eve of the meeting of EU foreign ministers that opened in Brussels on Monday, the topic of which was neither more nor less, but Russian aggression against Ukraine.

According to the head of the Ministry of Foreign Affairs, the way of holding the referendum indicates its illegitimacy: after all, the voting was held through 10 days after the announcement of its holding.

British Prime Minister D. Cameron said: “We do not recognize the referendum in the Crimea or its results. We urge Russia to start a dialogue with Ukraine and resolve the crisis within the framework of international law. ”

The European Parliament’s President Martin Schulz also accused and condemned. According to him, the Crimean referendum is illegitimate and illegal "both under Ukrainian and international law."

“The arguments by which military actions are justified by the protection of an ethnic minority were often used in the past with disastrous consequences,” he added.

Schulz was joined by European Commission President Jose Manuel Barroso and European Council President Herman Van Rompuy. They made a joint statement, during which they stressed that the referendum in Crimea is illegal, and therefore the EU does not recognize its results. (Everything is exactly for the American carbon copy. Obama gave instructions, and it is strictly followed.)

“The EU considers holding a referendum on the status of the territory of Ukraine to be contrary to the Ukrainian constitution and international law. The referendum is illegal and illegitimate, its results will not be recognized, ”the joint statement says.

And, again, in strict accordance with the requirements of the White House, the statement stresses that the foreign ministers of the EU countries of March 17 will discuss the Ukrainian situation and decide on "additional measures" with respect to the Russian Federation.

Well, and then followed the already familiar news the statement that "the resolution of the Ukrainian crisis should be based on the territorial integrity, sovereignty and independence of Ukraine within the framework of the country's constitution in strict compliance with international standards." Rompuy and Barroso said: "Only working together in the framework of the diplomatic process, including during direct negotiations between the governments of Ukraine and Russia, can lead to a way out of the crisis."

Of course, Canada was among the allies of the United States. Her Prime Minister Stephen Harper also refused to recognize the “so-called referendum.” In his opinion, this plebiscite has no legal force, since "it was held in Crimea under conditions of illegal military occupation." As for the actions of V. Putin, the last Mr. Harper declared "one-sided and reckless." Further, the Prime Minister of Canada recalled the formulation of sanctions: “Due to the fact that Russia abandoned attempts to de-escalate, we are working with our partners on G7 and other allies, coordinating measures on additional sanctions against the perpetrators.”

Dragged and the French. French Foreign Minister Laurent Fabius tweeted that Russia "bears a special responsibility on the international scene as a permanent member of the Security Council." According to Fabius, the referendum is illegal, because it "was held under the threat of the occupying Russian forces."

German Chancellor Angela Merkel said something about EU sanctions against Russia: “None of us want to impose them. However, if we have no other choice, we are ready to go for it. ”

The Japanese also spoke out. Chief Cabinet Secretary Yosihide Sugi said that the Japanese government does not recognize the Crimean referendum and urges Russia not to annex the Ukrainian region. Tokyo is also going to impose sanctions against Russia, after consulting with the G7 states. The Japanese, therefore, also stopped talking about the G8.

Thus, it is completely obvious that the entire West, together with its eastern partners, spoke out against Russia and against the popular will of the Crimea.

But after all, in 2009, the United States commented on Kosovo to the UN International Court of Justice. And later, according to lawyers in international law, a real legal precedent took shape.

In July, 2009, Washington declared that "the legal principle of territorial integrity does not prevent non-state entities from peacefully declaring their independence." During hearings at the United Nations International Court of Justice in 2010, the US administration stated that the secession of Kosovo complies with world legal standards, and the declaration of independence is the essence of the expression of the will of the “Kosovo people”. US Secretary of State Hillary Clinton explained to the world community how he should act: “We urge all countries to leave behind the question of the status of Kosovo and act constructively in support of peace and stability in the Balkans. We urge countries that have not yet done so to recognize Kosovo. ” Well, then the chairman of the International Court of Hisasi Owada formulated the necessary thesis in one phrase: “Based on the above, the court concludes that international law does not prohibit the proclamation of independence, and thus the declaration of independence of Kosovo 17 February 2008, does not contradict international law”. The court decision, of course, immediately greeted in the EU. (On the "BO" about all this "legitimate" orgy was described in detail in the article "The West is against the people's will in the Crimea and is preparing sanctions for Russia".)

It turns out that what is possible for the "Republic of Kosovo", the Crimea is impossible. As for Russia, it will be sanctioned as a punishment. In this issue, as well as in the issue of “illegitimacy” of the Crimean referendum, the West does not and cannot have two opinions. B. H. Obama gave valuable instructions - and they are followed by everyone: from Canada to Britain, from the UN to Japan ...

Observed and commented on Oleg Chuvakin
- especially for topwar.ru
Ctrl Enter
Noticed oshЫbku Highlight text and press. Ctrl + Enter
We are
Results of the week. “And the Crimea of ​​the Fatherland is sweet and pleasant for us!”Results of the week. “You can legally go. It is difficult to reach
Military Reviewin Yandex News
Military Reviewin Google News
381 comment
Information
Dear reader, to leave comments on the publication, you must sign in.