Mikhail Malyshev: 96,6% of Crimeans voted for reunification with the Russian Federation 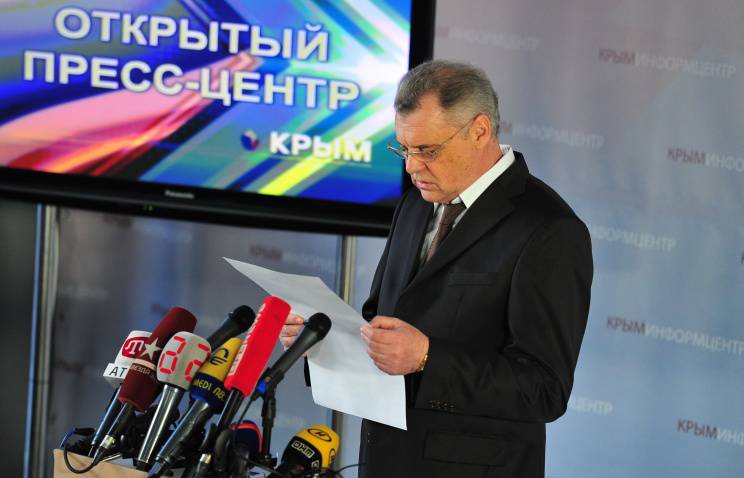 96,6% of residents who took part in the plebiscite voted for reunification with the Russian Federation in a referendum in the Crimea. This was announced by the head of the Commission of the Supreme Council on the organization of the referendum, Mikhail Malyshev, on the air of the Krym TV and Radio Company.

These data are given excluding Sevastopol.

Malyshev expressed confidence that "this result will not change in principle."

According to the channel, currently processed 100% protocols. In this case we are talking about operational data, the final results will be summarized after paper protocols from all territorial constituencies arrive in Simferopol.

Two questions were put forward to the all-Crimean March 16 referendum: "1. Are you for the reunification of Crimea with Russia as a subject of the Russian Federation? 2. Are you for restoring the Constitution of the Republic of Crimea 1992 of the year and for the status of Crimea as part of Ukraine?"

When the Crimea will be able to be part of Russia

All the necessary legislative decisions to ensure the entry of the Crimea into the Russian Federation will be taken as soon as possible. 17 of March was confirmed to journalists by the secretary of the United Russia General Council, Vice-Speaker of the State Duma Sergey Neverov.

According to Neverov, "the results of the referendum held in Crimea clearly showed that the inhabitants of Crimea see their future only as part of Russia, people voted for the reunification of the people who always lived together."

The referendum in Crimea fully complied with international law. This was stated by Russian President Vladimir Putin in a telephone conversation with US President Barack Obama, the Kremlin’s press service reported.

In connection with the referendum held in Crimea, Vladimir Putin stressed that "its implementation fully complied with international law and the UN Charter and took into account, in particular, the well-known Kosovo precedent. At the same time, the inhabitants of the peninsula were guaranteed the possibility of free will and self-determination."

At the same time, US President Barack Obama said in a telephone conversation with Russian President Vladimir Putin that the results of the referendum in the Crimea "will never be recognized by the United States and the international community." This was reported by the press service of the White House.

The US President confirmed that he considers voting in Crimea on the peninsula’s status as a “violation of Ukraine’s constitution,” but he believes that “there is a clear way to resolve this crisis by diplomatic means, which will take into account the interests of both Russia and the people of Ukraine.”

The United Kingdom is also in favor of a diplomatic settlement of the conflict. She also does not intend to recognize the results of the referendum in the Crimea.

“We do not recognize the Crimean referendum or its results,” warned a spokesman for Downing Street, 10. “We urge Russia to enter into a dialogue with Ukraine and resolve this crisis in accordance with international law,” he added.

Ctrl Enter
Noticed oshЫbku Highlight text and press. Ctrl + Enter
We are
Crimea. Anniversary of the revival of RussiaLatvian referendum. The majority of citizens are against Russian as the second state language.
Military Reviewin Yandex News
Military Reviewin Google News
116 comments
Information
Dear reader, to leave comments on the publication, you must sign in.