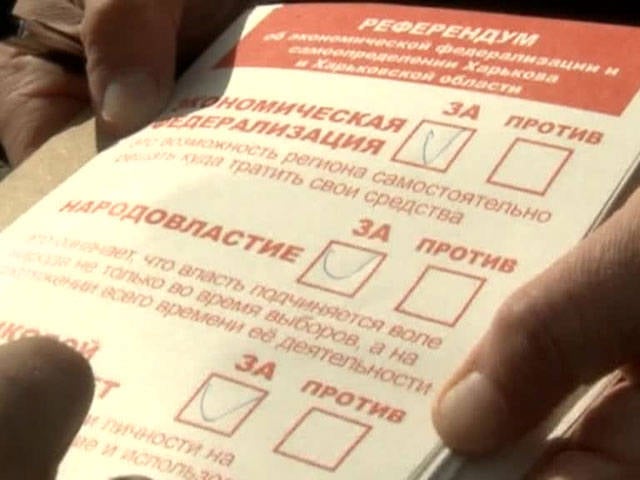 On the eve of the Crimean referendum was supported by residents of Kharkov. Thousands of people came to the assembly to vote for freedom of choice, the right to their native language and the federalization of the region. The organizers said that many who did not go to the rally for fear - on Saturday, militants of the Right Sector staged a shooting in the city, which killed two people.

Several thousand citizens came to the referendum meeting, they decided to hold it in support of the Crimean. Ballot papers have three main points that must be supported or rejected: democracy, linguistic sovereignty and economic federalization.

The results of the vote will sum up the other day. The second group of protesters took up a position opposite the council house. The townspeople stretched a thirty-meter-high cloth in the colors of the Russian flag. The culmination of the protest action was a march to the Russian consulate general. Residents of Kharkov asked Vladimir Putin to protect them from the Nazis, those who occupied offices in Kiev and sent neo-fascists of the right sector to the city.

From the second floor of the office center, the militants of the Right Sector methodically shoot people on the street. Everyone who enters the zone of visibility of the shooter, whether it be a regular passerby or a policeman, automatically finds himself in the line of fire. Another shot - and a young man falls on the asphalt. They are trying to help him, unsuccessfully. Five minutes later, doctors ascertain death.

The three-story building is squeezed into a row of others the same. It is impossible to bypass the flank, there is one way - through the gate and into the courtyard. So the townspeople got to the rear of the militants, where they were greeted with Molotov cocktails.

It all started on the Maidan of Freedom. Radicals arrived there by bus, threw pro-Russian activists with smoke bombs and sprayed tear gas.

Provocateurs tracked down. But the citizens themselves could not do anything. Soon the police cordoned off the block. Directly from the house arrest, which he appointed the capital court, the city head Gennady Kernes burst through the cordon in a training suit. He immediately called the leader of the militants Andrei Biletsky on his mobile phone.

This far-right nationalist missed all the events on the Maidan. At this time he was serving his sentence in the colony for group robbery. But with the advent of the new government, Biletsky was released under an amnesty as a political prisoner. Yarosh immediately took it into circulation and sent it to the "eastern front."

Meanwhile, Biletsky and his gang are already held hostage by three people: a policeman and two guards. Militants require a bus to leave the city, specifically - to Poltava. Most of the armed nationalists came from there.

Kernes still went to visit the radicals. As promised, alone and without weapons. And soon he returned and brought one hostage. Nikolai confirmed: Bandera are serious, they have enough weapons. "They have everything there divided into groups. Mostly hunting pump-action shotguns, travmatika. I talked to them, said that you are doing? You understand that this is not a game, a game? You are killing people, I say."

Two killed, five seriously wounded, among them one policeman. The end came on Saturday morning. Militants suddenly decided to surrender. Here they are put in buses, no one resists. The townspeople do not believe that the radicals will be taken to prison and not taken out of the city and released, and they block the road.

The next day, it becomes known - more than thirty people were detained. The Ministry of Internal Affairs of Ukraine confirmed that all the detainees were the militants of the Right Sector, and it was the radicals who were the first to open fire. A whole arsenal of weapons was removed from the building. And this is not the first sortie of the right-wing radicals. A few days ago, participants in the peaceful pro-Russian march were shot from the same Volkswagen.

In the afternoon, on the square - a rally of many thousands. People require an honest investigation. Near the building of the regional department, where evromaydanovtsev was taken, activists of the city militia have been on duty for two days. They fear that radical youth will be released. By the way, the information that the neo-fascist Biletsky, who was definitely in the building, was detained along with everyone was not confirmed. Apparently, he was allowed to leave at night, through a hole in the wall. It was probably the price of a deal in which the militants agreed to surrender to the authorities voluntarily.
The office of the radicals in Rymarskaya’s protesters defeated today, the St. Andrew’s flag was hoisted onto the building