Kosovo and Crimea: similarities and differences through the eyes of European politicians 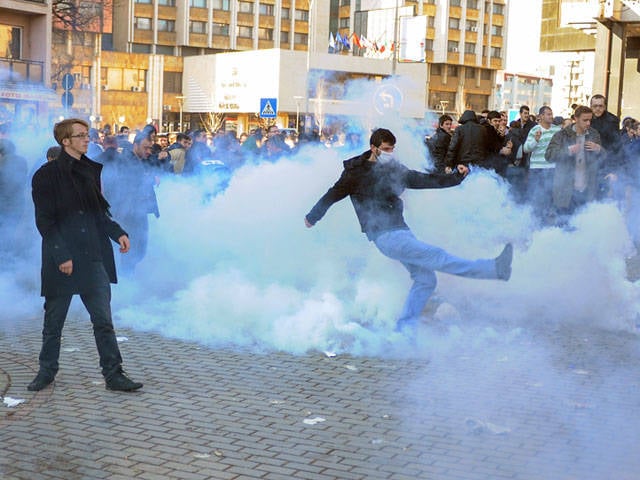 The Kosovo precedent, to which Russian diplomats refer, when it comes to the right of Crimean citizens to self-determination, is viewed differently by different parties on the basis of their interests. From the once Serbian region - the material of our special correspondent Mikhail Antonov.
A satirical rethinking of the Maidan is presented in the comedy show "Psushka". The “other”, relatively official, point of view on events and actors with elements of the grotesque and direct quoting the US Assistant Secretary of State: “The Americans invested five billion dollars in a coup in Ukraine ... Mr. President, demolish this Wall Street!” So always, first laugh after 22's, and then begin to criticize in prime time.

Mrs. Merkel looked alarmed on Thursday in the Bundestag, but so far obviously not by this, and continued to bend the old line about sanctions, the declaration of independence of the Crimea and today's referendum.

"What we see in Europe now is very unpleasant. I am afraid we will need a lot of time to resolve the conflict. We are talking about the territorial integrity of the neighboring European state, respect for UN principles, principles and methods for realizing the interests of the country in the 21 century" - said Merkel.

On the screen was Colin Powell - the US Secretary of State, who already in the 21 century told fables about chemical weapon in iraq. But Western policy does not remember this tube, as if it was born in it. But in fact, no: the technology of violent regime change and the revision of European borders was worked out in 99 at the Serbian test site.

In July, 2010 will de facto have long recognized Kosovo as an international court of justice of the United Nations, and the European Union and the United States will warmly support this.
Says Karin Ashton, EU High Representative for Foreign Affairs and Security Policy: “The EU welcomes the decision of the Hague Court. Now we need to focus on the future. The future of Serbia is in the European Union, as is the future of Kosovo. Neighborhood relations, regional cooperation is the basis of the EU’s existence. And we are ready to help establish a dialogue between Pristina and Belgrade. Cooperation between Serbia and Kosovo will make progress on the way to the EU, improve the lives of citizens of these countries. "

Serbia and its rebellious region are still stuck on the way to the European Union, but now about something else. The referendum, the declaration of independence - in Crimea everything is the same as it was in Kosovo. Although not. Almost all. Chancellor Merkel could explain what is missing - she spoke about it in the Bundestag - but for the sake of completeness, let Mr. Elmar Brock do it - the chairman of the international committee of the European Parliament, who just jumped out of the room without waiting for the end of the conversation with the Russian deputies. this topic:

- There was a genocide in Kosovo, and it had to be stopped, and in the Crimea no Russian-speaking rights were violated.
- Why don't you see any parallel?
- Absolutely nothing. Nobody was killed in Crimea.

What is it, Mr. Brock? Is Russia to blame for not waiting for "Muscovites for knives"? Wait - everything was okay? But then your rules of the game are violated, and not international law, which knows examples of the bloodless solution of questions about the nationality of territories. And there is no need to go far from Strasbourg - only one hundred kilometers to the north.

France wants to include the Saar in its borders, but historically and ethnically it is Germany. In this connection, a local referendum is held in the middle of 1955. People are asked: "Do you want a European Statute, yes or no?" The European Statute envisaged the settlement of the territorial dispute around Saarland, under which the land would remain economically oriented to France and would enjoy the rights of semi-autonomy in this country. 67 percent voted against. They, like Crimeans today, want to go home. Roland Shtigulinski worked a lot of brush that year so that Saar would say no to France.

“Of course, we were glad, we celebrated, we sat by the radio and counted votes in different polling stations. We quickly understood that the Saarland’s population would reject the land autonomy project, although it was preceded by heated debates, fights, and many police calls. July to October 1955, it's three months, there was a mess here, there were no dead, but people walked with black eyes and broken bones, the situation was extremely tense, ”recalls the cartoonist.

The German Bundestag perceives the negative result of the referendum as a signal to action. And as a result of negotiations between Bonn, Paris and Saarbrucken 1 on January 1957, this land is reunited with Germany.

Professor stories Khudeman came to an interview with a dictaphone so that we did not distort anything, because he is against the secession of Crimea from Ukraine. But his objections are still not substantive, but according to the procedure: “Can Crimea be compared with Saarland? No, then negotiations took place for several years, there was international agreement on the issue, international observation. There was no pressure, there was many opinions. As a result, they came to a common denominator. "

Although observers came to Crimea, of course, it is impossible to compare: it did not occur to the French to forbid the Saar Germans to speak their native language. Or send a friendship train to the referendum. And in France there was a Constitution and a lawfully elected president with whom it was possible to talk. But in Ukraine now there is neither one nor the other, says the leader of the German "left" Gregor Gysi, speaking as the main opponent of Merkel, all at the same hearings in the Bundestag: "I am surprised that you, Merkel, say that such a referendum contradicts the constitution. You decide when it acts and when it doesn’t. When the president resigns, she doesn’t act, and during a referendum she suddenly comes back into force. Determined whether you support the constitution in whole or only some parts of it. "

"If I come into contact with the new government, which somehow was formed, I must accept this fact. But! If I was the minister of the German government, I cannot accept that there are five state fascists in the country who hold key government posts This, honestly, is simply unacceptable, at least if you take into account our history. I would be very careful in contacts with them. I get angry: four ministers and the prosecutor general are fascists, the secretary of the National Security and Defense Council of Ukraine was one of the founders of the fascist Party "Freedom".

Of course, there are democrats there, but I know from history that if the fascists somehow seized power, they will not give it up voluntarily. It bothers me, "adds Gysi.

A significant part of the European ruling elite and European bureaucracy have already compromised themselves with their ties to the liberal-fascist group in Kiev. With each handshake, with each approving gesture towards this political oxymoron, they increasingly get dirty in brown. And this time it’s definitely not about money, but about spending, including political capital. Tunnel thinking, which does not allow to take counter arguments, turns out to be psychological defense, and the only strategy in the dispute, in which the voice of the West itself is heard louder and louder on the Russian side.
Says Jean-Pierre Shevenman, a French senator, an expert on Russia: "As for the Crimea, no one can argue that historically he is Russian. The population of Crimea is mostly Russian. There is no ideological or military reason for the new cold war in Europe. No one is interested in this. Ukraine cannot be confronted with a Manichaean choice: either Russia or the EU, since this dilemma, taking into account the country's history, is becoming insoluble. "

But Valerie Giscard D'Estaing, President of France in 1974-1981, thinks: “The referendum and the Crimea should be put aside. As soon as a decision is made and the majority of the population speaks out, then the problem will disappear. And from that moment The Ukrainian question will no longer be a source of confrontation between Russia, France and the whole of Europe. We need to search for a solution calmly. There is no need to threaten Russia, this does not lead to anything. I believe that Ukraine will be alone in Europe anyway. It will not become an EU member - it's impossible. She doesn't maybe a member of NATO is impossible. But it can be a privileged partner of Europe. Although we still need to see how it will look. "

Privileged partnership promised Ukraine next week. At the next emergency summit, European leaders plan to sign a political agreement with Kiev and impose the first sanctions against Russia. This means that satirists will have a new space for creativity, and the show, as they say, is a master.

Ctrl Enter
Noticed oshЫbku Highlight text and press. Ctrl + Enter
We are
"International law? I do not know what it is, contact my lawyer "Pristina throw. Russian stolen victory
Military Reviewin Yandex News
Military Reviewin Google News
64 comments
Information
Dear reader, to leave comments on the publication, you must sign in.