The last parade of the BOD "Ochakov" 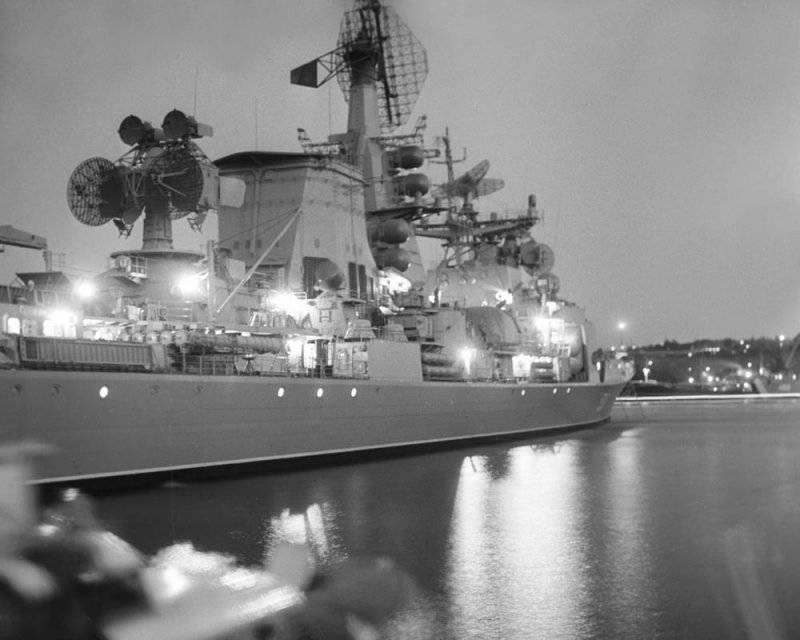 The anti-Russian slogans “The Russian fleet is out!” Suddenly changed to the frightened exclamations “Get out the Russian fleet!” (Crimean joke 5-year-old).

On the night of March 6, 2014, a large anti-submarine ship Ochakov, previously excluded from the Black Sea, was sunk off the coast of Crimea fleet in 2011. According to eyewitnesses, the operation was carried out late at night by the forces of the Russian Black Sea Fleet in order to block the Southern Naval Base of the Ukrainian Navy on Lake Donuzlav.

"Ochakov" in a semi-disassembled state was brought in tow and placed between the North and South spit at the entrance to the lake Donuzlav (artificially turned into a bay). From the approached fire-fighting boat of the Black Sea Fleet, the Ochakov's hull was filled with water for loss of stability, then, according to unconfirmed reports, the explosive charge of explosives was exploded on board the BOD — the ship abruptly fell on board and lay to the bottom. The depth at the site of flooding is 9-11 meters, the right side of the ship is still visible above the water.

With the length of the 173 hull of the meter, the flooded Ochakov tightly blocks the entrance and exit to Lake Donuzlav, where six Ukrainian Navy warships are currently based, including large landing ship Kostyantin Olshansky (U-402).

It is reported that along with Ochakov in the fairway at the entrance to Donuzlav several more auxiliary vessels of the Russian Navy were flooded.

The Ukrainian side expressed extreme displeasure with the situation. When the possibility of transition of the Crimea under the jurisdiction of the Russian Federation was not so obvious, the claims of Ukrainians were reduced to material damage: in the future, significant costs would be needed to eliminate the artificial barricade at the entrance to Donuzlav. The mass of the flooded steel structures "Ochakov" exceeds 5000 tons - the body of the BOD can not be dragged to the side without the use of special equipment, while first you need to divide the body into several parts (as an option - to destroy the explosion). It may take months or even years to carry out these works, given that so far no one even discusses the rise of Ochakovo. 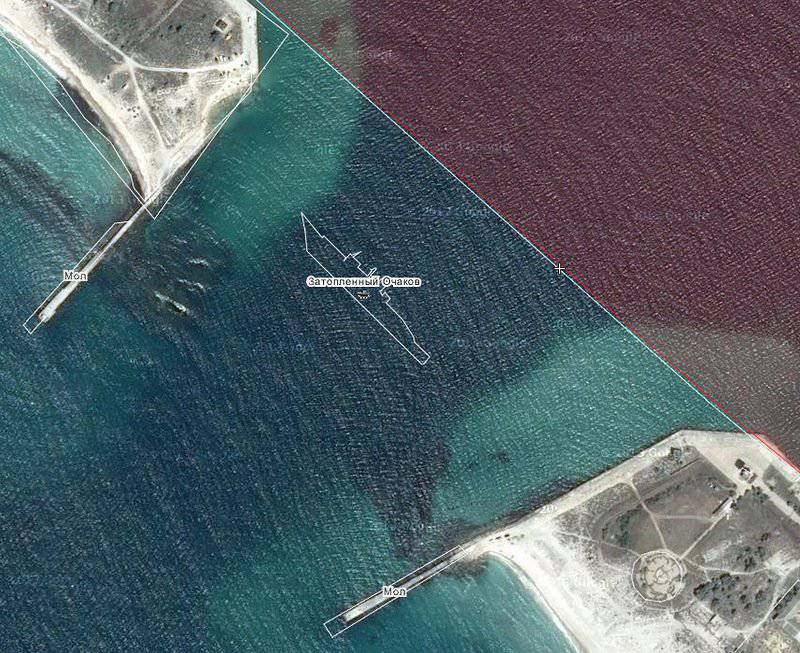 At the moment, when the problem of raising flooded ships off the Crimean coast becomes purely Russian, the claims of the Ukrainian side are mainly associated with negative consequences for the environment: fuel left in tanks of the flooded BOD could leak which could cause irreparable damage to the coast of Crimea.

“13 of March of the current year, the Foreign Ministry of Ukraine notified the Russian side that in the area of ​​the southern spit of Lake Donuzlav from the place of flooding of a large anti-submarine ship“ Ochakov ”and a diving boat, a band of white color of unknown origin moves to the sea. The responsibility for the consequences lies with Russia. ”

No liability and no consequences of flooding BOD is not expected. The fears of Ukrainian environmentalists are not based on any reasonable grounds. Yes, engine oil from the Ochakovo mechanism and, possibly, the last fuel residues flow into the sea. These substances cannot pose any threat to the coast of Crimea, due to the insignificance of their volumes. To understand this obvious truth, it suffices to recall Pearl Harbor, where five battleships and a dozen other smaller ships sank in one day. Thousands of tons of fuel oil poured into the water of the Pearl Bay, but no environmental disaster in Hawaii happened.

Or another example - the famous strait in the Solomon Islands with the telling name Iron Bottom (Iron Bottom), where during many days of battles at least 50 ships and ships sank. Now this strait is a popular pilgrimage site for divers. It is reported that the wrecks of old ships are lost in the lush underwater flora and fauna typical of those equatorial latitudes. No environmental disasters! The safety factor of nature was much higher than we could have imagined. 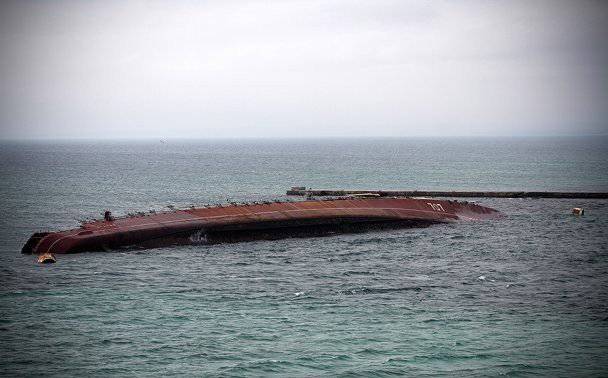 Old ships lie at the bottom. Scraps of the Ukrainian Navy are locked at their moorings. The Black Sea Fleet has taken all possible measures to ensure the bloodless accession of the Crimea to Russia.

But it would have been too vulgar to revel in the “great victory” over the Ukrainians and draw any serious conclusions from all this. Yes, our sailors clearly carried out an operation to prevent senseless bloodshed, blocking the Ukrainian fleet and thereby strengthening Russia's position on the coast of the Crimea. But the very threat of a mad conflict between Russians and Ukrainians gives all this stories creepy crimson hue. There is no fratricidal war between Russia and Ukraine!

It is equally foolish to draw any analogies with the tragic events of 1854-55, when Russian sailors had to scuttle their ships at the entrance to Sevastopol. Sailing ships were powerless against the steam frigates of the British and French fleets - Admiral Nakhimov made the only right decision to block the entrance to the Sevastopol Bay, and include the crews of the ships in the garrison of the Sevastopol fortress. 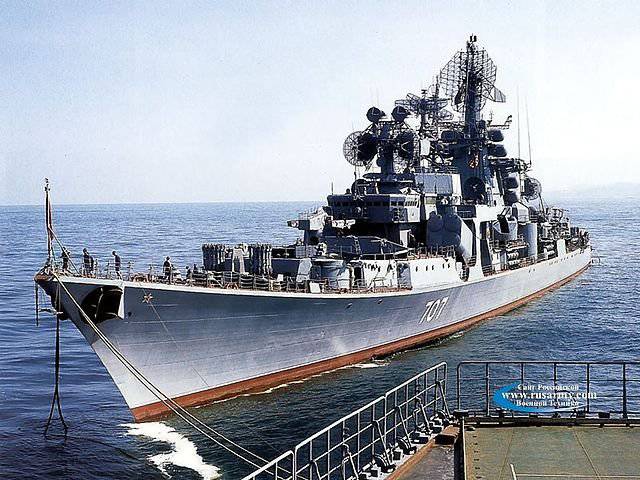 Unlike the obsolete royal fleet, the large anti-submarine ship Ochakov was a masterpiece of 70's design thought. BOD made 9 combat trips to the Atlantic and the Mediterranean, having traveled hundreds of thousands of nautical miles in 16 years of active service. BOD took part in the global military exercises of the Navy, took on board hundreds of foreign delegations - a strict, majestic cruiser every time led to the delight of diplomats and military attaches of foreign countries. BOD has visited many foreign ports, from nearby Varna to faraway Havana. “Ochakov” three times (in 1977, 1979 and 1986) was awarded the title “The Best Ship of the Navy”.

In 1991, the honored ship embarked on repairs in Sevastopol, but due to the collapse of the Union, repairs suddenly dragged on. In 1993, onboard the Ochakov there was a serious fire. The ship was planned to be put back on line in 2004-2005, but this did not happen.

In 2008, the Ochakov was removed from the territory of the Sevastopol Marine Plant and put in sludge in the Trinity Bay of Sevastopol. From this point on, the fate of the BOD was predetermined: a solid age and an eternal lack of funding put an end to the future career of Ochakovo. 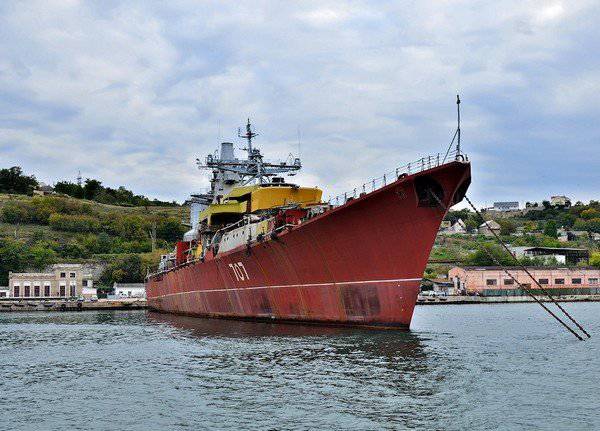 In August, a solemn ritual of descent of the Naval Flag took place on the Ochakov in August in the presence of the Black Sea Fleet command and former members of the BOD crew. At the end of the rally, the first commander of Ochakov, Admiral Igor Kasatonov, lowered the St. Andrew’s flag and handed it over to the Black Sea Fleet Museum for storage.

And, suddenly, an unexpected challenge! The ship that had already been written off had to “wake up” again in defense of the interests of the Motherland, both literally and figuratively.

Up you, comrades, everything is in places! The last parade comes ...

The large anti-submarine ship "Ochakov" is the second representative of the 1134B project (the cipher "Bercut-B" or simply "beekeeper"). He was named in honor of the events of 1788, the heroic storming of Russian troops of the Turkish fortress Achi-Kale (Ochakov). Laid in 1969, launched in 1971, accepted into the operational structure of the USSR Navy in November 1973.

Seven BOD project 1134B became the pinnacle of the evolution of the Soviet anti-submarine ships of the far sea zone: in fact they were powerful missile cruisers with huge ammunition, gas turbine power plants and hypertrophied anti-submarine weapons. Their full displacement could reach 9000 tons, and high seaworthiness and a significant supply of fuel allowed them to cross the Atlantic Ocean diagonally! In addition to high combat qualities, the "Bukari" were distinguished by high standards of habitability, providing the crew with a very high level of comfort in conditions of prolonged service in any climatic zones.

High ratings of BOD pr 1134B were received not only from domestic sailors, but also from foreign experts. So, the Americans considered the "bukarey" the most successful and effective project of the Soviet PLO ship of the far sea zone. It is worth emphasizing the exceptionally high combat stability of these BOD - on board each, in addition to the developed anti-submarine weapons, four (!) Anti-aircraft missile systems were installed, which made the “Bukari” a hardly vulnerable target for all 70's air attack weapons. 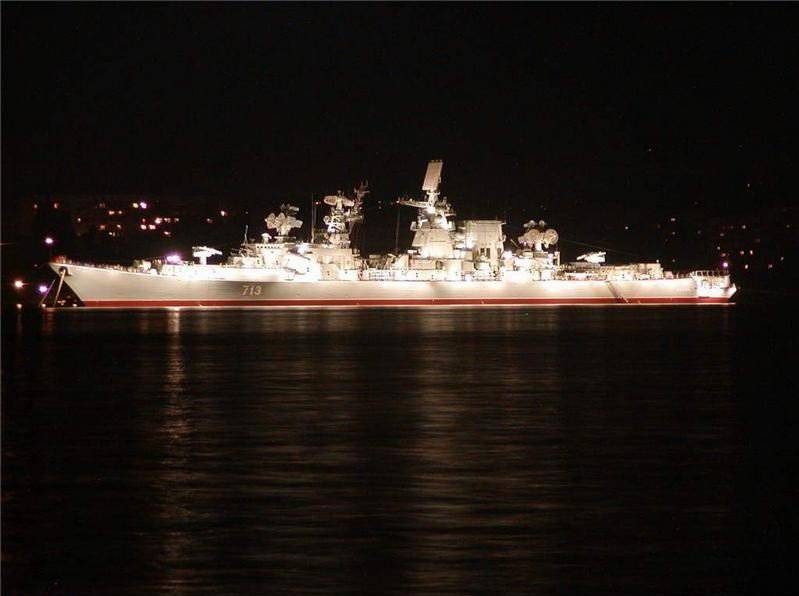 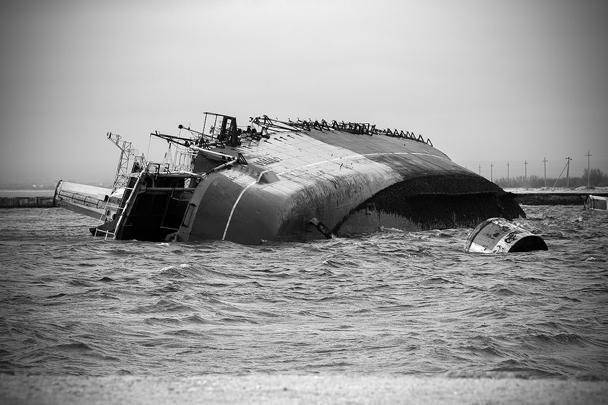