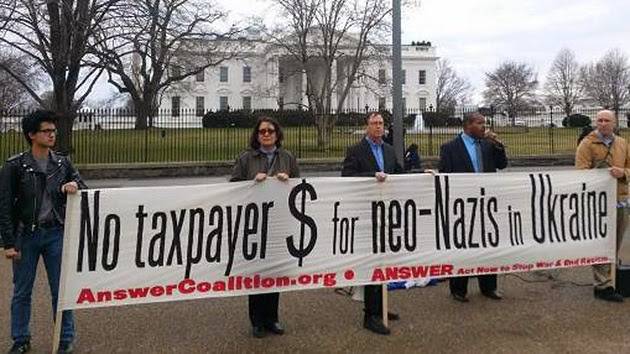 On March 12, before the meeting of Barack Obama with Arseniy Yatsenyuk, a protest rally was held near the White House in Washington under the slogan “No to sponsor Ukrainian neo-Nazis!”. The American Anti-War Civic Coalition (“The Answer Coalition”), which organized the anti-fascist rally in Washington, launched a campaign to bombard the White House and the US Congress with thousands of e-mails from ordinary civil society representatives, demanding that “not one cent of American taxpayers’ pockets should be used to the “new Ukrainian government”, in which, according to The Answer Coalition, “the neo-Nazis and the fascist ultra-right took all the key posts of the Cabinet of Ministers, including the military bloc.” The Internet portal of the anti-Nazi coalition provides specific information about who is who in the ranks of the Ukrainian regime, gives a hard assessment of the anti-people fascist essence of the Kiev putsch.

Justin Raimondo, one of the activists of this movement in America — the columnist of the popular portal Antiwar.com — went further than posting detailed information on neo-Nazis in the Ukrainian “interim government” on the Internet. He asked himself: why do not Washington and Brussels point-blank see the fascist coloring of the Ukrainian junta? In the article “What color is the Ukrainian revolution? Washington is whitewashing the Ukrainian browns. ”Raimondo writes that the desperate efforts of supporters of the American“ war party ”who are trying to deny the fascist nature of that clique, which they helped to seize power in Kiev, are already comic. The journalist quotes appearances in the New York Times of the maxim of the teacher of Russian literature at the University of California Amelia Glaser. This academic lady, sarcastically notes Justin Raimondo, writes that "over the past decades there has been a significant rapprochement between Ukrainian Jews and their fellow-Ukrainians." “What a relief,” Justin Raimondo says ironically, “but I was afraid that all this anti-Semitic rhetoric coming from the Freedom Party and the Right Sector says that neo-Nazis raised their heads. Everyone wondered if the rise of “Freedom” and all the torchlight processions of the idolaters Stepan Bandera, the leader of an armed gang that collaborated with the Nazis, do not promise us the appearance of big problems. ”

Arseny Yatsenyuk, who was banned by American Protestants, was warmly welcomed at the Atlantic Council, the strategic center of NATO. There, the guardian of the “territorial integrity of Ukraine” was not reminded that in 2007, in Pristina, he warmly supported separatism, advocating the secession of Kosovo from Serbia and the creation of a militant Muslim enclave in the very heart of Europe. With a request to create an enclave at the borders of Russia, the Kiev junta intends to appeal to NATO now, Yatsenyuk did not elaborate. Journalist's insistent questions about neo-Nazis, the Right Sector and anti-Semitism were answered evasively and meaningfully: “The assistant to the Prime Minister represents the Jewish community.” The mouthpiece of the Kiev junta did not apply to its own persona and other representatives of the cosmopolitan oligarchy planted "for feeding" in the regions of the South-East ...

When the Crimean Parliament adopted a declaration on the independence of this republic, I remembered история Kosovo’s “self-determination”, where, as is known, there was no referendum and where everything was very simple. In 2007, then US Assistant Secretary of State Nicholas Burns told a congressional hearing how he spoke to Serbian Prime Minister Kostunica: “You have already lost Serbia to 8 years ago. She was taken from you 8 years ago! ”- Burns explained. Insisting on the “uniqueness” of the Kosovo incident, which neither Russia nor the US congressmen agreed with, Nicholas Burns cut off shortly: from the point of view of the US government, the “uniqueness” of the situation in Kosovo is that eight years 15 thousand soldiers are in this the province and it costs 250 million dollars a year. “We have to remind the Russians,” the US Undersecretary of State announced with metal in his voice, “that we have taken on the hard work — our troops, our money, our partnership with Europe, and whatever happens tomorrow, whatever the outcome voting, we will be there "...

The unprecedented pressure exerted on Russia by the United States on the issue of Crimea and Ukraine shows, among other things, that 5’s billions of dollars that Washington spent on Ukraine really don’t want to lose. However, in the years that have passed since Nicholas Burns’s speech in Congress, the unipolar world has made a deep crack, a new foreign policy has taken shape in Russia that has become stronger, and, not least, the attitude towards the aggressive policy of Washington among the citizens of America has radically changed. The overwhelming majority of Americans are categorically against any interference of their country in the affairs of Ukraine - this conclusion follows from recent public opinion polls conducted by authoritative US sociological centers. According to a Yougov poll by an American company in early March, only 14 percent of Americans recognized the United States as “the right to intervene in the conflict in Ukraine” and only 18 percent of respondents believe that “the United States has the responsibility to protect Ukraine if Russia enters its territory.”

Sociological polls show that Americans see no reason for their country to intervene in Ukraine’s affairs “even in the most extreme circumstances,” writes the Huffington Post. According to the newspaper, so say "the majority of Democrats, Republicans and independent." Prestigious American Pew Poll notes: for the first time in the fifty-year history of this center, the majority of Americans, responding to a question about the priorities of US foreign policy, stated that America "should only be engaged in foreign affairs with its affairs and give other countries the opportunity to deal with their affairs as they themselves consider necessary. "

American independent observers can no longer write without irritation about the mode of action of their government in international politics, which is based on the assumption that "every nook and cranny on the globe is of strategic importance to the United States and, accordingly, threats to America’s interests can emanate from there." It is enough to look at popular American blogs to be sure: the overwhelming majority of Americans believe that the main threat to US interests is the blatant incompetence of those responsible for foreign policy in Washington.

The blog of Walter Patrick Lang, a retired American officer who served in intelligence, evaluating decisions made by the White House in Ukraine, sounds very sharp. “Why do idiots prevail in our international politics?” - variations of this question in the responses to the Ukrainian events that have become the number one topic in Walter Patrick Lang’s blog in recent weeks are constantly encountered. Commenting on the so-called executive order of Barack Obama from 6 in March, the blogger sarcastically notes: “The second paragraph of the“ executive directive ”contains indecently false wording, which states that the events in Ukraine" pose an unusual and extreme threat to the national security and international policy of the United States ", and the president you see, it even announces an “emergency” requiring you to respond to this threat. ”

From myself I would add that the “executive order” is not only an indecent, but also a scandalously inadequate document. Obama has endowed himself, the Federal Treasury and the US Secretary of State with the function not only to seize the property of foreign nationals without trial, but also, at its discretion, to impose sanctions on those who defend the right to self-determination, enshrined, among other things, by the International Covenant on Civil and Political Rights 1966. Obama’s “executive order” threatens to defeat property and other rights not only to those who March 16 vote in a referendum in Crimea, but to all those who support them “in any part or region of Ukraine without permission from the Kiev authorities” - the authorities, I remind you illegal, established by an armed coup.

“Put up a competent Secretary of State, dismiss Susan Rice, Victoria Nuland, John Klapper, and Samantha Power!”, One of the comments on Pat Lang's blog suggests. Another commentator simply notes that "Obama interprets international law in accordance with his ideological preferences."

According to the well-known observer and researcher Robert Parry, this behavior of the American president is not least due to the fact that he, in fact, became a toy in the hands of a cohesive coalition of neo-conservatives occupying high posts in the Pentagon and the State Department. This coalition, according to Parry, "inflated the fire of rebellion that led to the violent overthrow of the democratically elected president in Ukraine and the escalation of the situation around the Crimea." Almost the same assessment of the state of affairs in the field of foreign policy decision making in Washington is given by Pat Lang in his famous work “Drinking The Cool-AID”, where he analyzes all the troubles of the US administration unleashing the war in Iraq.

Once the champion of the world domination of the British, Herbert Wells wrote in his "Open Conspiracy": "Britain will cease to be a great nation if it does not act in the categories of evil." Those who determine the foreign policy of the United States, inherited the philosophy of "open conspiracy." Therefore, each sovereign state that has become the target of the transnational clique must clearly realize that the concessions to this clique for this state are not just dangerous - they are disastrous.

Ctrl Enter
Noticed oshЫbku Highlight text and press. Ctrl + Enter
We are
Sergey Glazyev: How to win the warHow can Russia survive and win in the 21st century?
Military Reviewin Yandex News
Military Reviewin Google News
58 comments
Information
Dear reader, to leave comments on the publication, you must sign in.