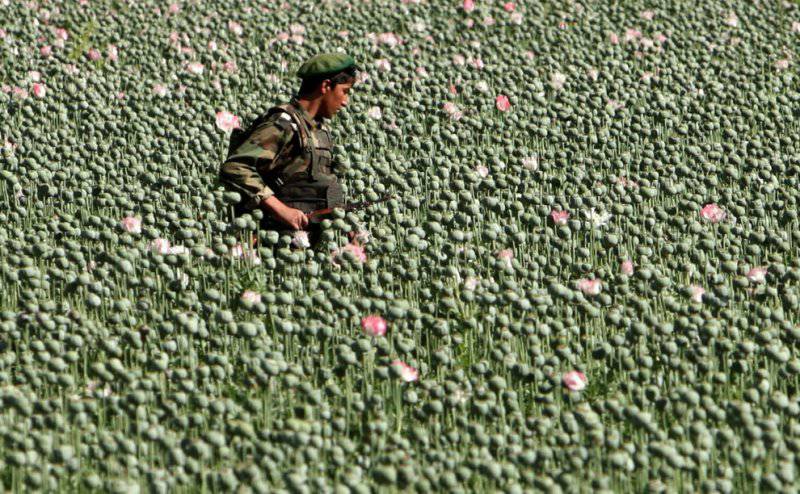 Unpleasant news come from Afghanistan on the eve of the withdrawal of American troops: compared to last year, the area of ​​poppy crops in this country increased by 36%, which is alarming for Russia and the states of Central Asia. The aggravation of the problem of drug trafficking will inevitably lead to an increase in the level of crime and an increase in the financing of terrorist groups. At the same time, NATO is not in a hurry to take responsibility for indulging in drug business and acts in Afghanistan according to the principle “after us - even a flood”.

The State Drug Control of Russia warns: the production of heroin in Afghanistan is an international disaster, threatening the national security of all states located in the vast area from the Pamirs to the English Channel. In Europe, however, only a small fraction of Afghan opium is released; The main drug market is Russia.

According to the Federal Drug Control Service, since 2001, when Operation Enduring Freedom began, the amount of heroin produced in Afghanistan has increased almost 40 times. This is an unprecedented case, unparalleled in the world. stories.

At the same time, it is important to note that the avalanche-like growth of the acreage of opium poppy occurs precisely on the eve of the withdrawal of the occupation forces. So, at the beginning of last year, poppy plantations occupied 150 thousand hectares, and at the end - already 209 thousand. For comparison: in 2001, poppy crops in Afghanistan made up just 8 thousand hectares! In just three years, the Taliban managed to almost completely destroy the Afghan drug business.

NATO cannot boast such achievements. On the contrary: an increasing number of Afghans are becoming involved in the production and marketing of narcotic substances. So, to date, 3 of a million people in Afghanistan are involved in the drug business - mainly they are engaged in slave labor in the cultivation of fields of opium poppy. They get a penny: the bulk of the money is used to finance various mafia and terrorist groups, both in Afghanistan and far beyond its borders.

In general, the Afghan economy is a unique phenomenon: under conditions when the industry is absent and agriculture is in decline, the state’s “unofficial” GDP is provided only through the production of heroin. So, today Afghanistan alone produces opiates twice as many as all the countries of the world put together made 10 years ago. At the same time, Afghanistan has managed to become the main consumer of heroin.

The head of the Federal Drug Control Service, Viktor Ivanov, calls Russia hostage to the Afghan drug traffic. The main reason for this is the US military-political activity in Central Asia.

US officials themselves ruthlessly criticize ... themselves. According to them, Washington for many years was not able to develop an effective strategy to combat drugs. However, as it is known, who is looking for - he will always find, and the self-criticism of foreign special services seems too hypocritical.

The United States disclaimed all responsibility for increasing the production of Afghan heroin. The government of Afghanistan should be blamed for everything - this is the official position of the American occupiers. At the same time, there are nine American bases in the country - and this is clearly enough to suppress the drug business at the root.

But Washington, apparently, the fight against drug trafficking is not profitable. After all, the drug traffic from Afghanistan does not concern North America! And only small crumbs get to Western Europe - that which could not be sold in Russia and the CIS.

But the number of Russians who use opiates is growing every year. The statistics are disappointing: about half a million Russian citizens need expert help from a narcologist. Of these, 90% take heroin or other opioid drugs, the vast majority of which are imported from the territory of Afghanistan.

The problem of drug addiction is closely related to the spread of HIV infection. Up to 80% of Russians infected with the human immunodeficiency virus use opiates regularly. It should also be added that the spread of drugs leads to an exacerbation of the demographic problem and contributes to an increase in crime rates.

The Russian market is attractive for manufacturers of heroin because it is safe. When transporting drugs through the Central Asian republics, local mafia groups guarantee the safety of cargo. Iran, China, Pakistan and other destinations are not attractive for drug traffickers from Afghanistan: in these countries they are severely punished for possession, distribution and use of drugs.

For example, there are cases when the Corps of Guardians of the Islamic revolution without a trial hung up couriers caught on the Afghan border. And the executions were not solitary - massive. In China, they are also executed for drugs, but as it should be - with the collection of evidence and evidence, the conduct of a trial. If the court deems it necessary, the death penalty may be delayed, if not abolished.

Why do they close their eyes to the heroin trade in Russia? Why are punishments too liberal despite the fact that the country is leading in terms of drug use? Apparently, these problems will have to be addressed in the next few years.

To win the confrontation with drug manufacturers, Russia needs to enlist the support of the world community. And these are not empty words: there are no borders for crime. Today, almost all the neighbors of Afghanistan are involved in the fight against drug trafficking, but there is no concrete success due to the fact that the actions of the countries are not coordinated by anyone.

Russia is demanding to raise the problem of manufacturing and marketing drugs at the highest level - in the UN. Specialists have prepared a plan for the destruction of Afghan opium poppy plantations, called "Rainbow-2".

However, the owners of Afghanistan - the United States and NATO - strongly oppose Russian initiatives. According to James Appathurai, Special Representative of the North Atlantic Alliance for Central Asia and the Caucasus, “we should not allow people in the second poorest country in the world to be left without work, without the only source of their existence.” Yes, the official representative of NATO stated in plain text that the fight against drug trafficking is a crime because Afghans do not know how to earn money by other means.

It turns out that the North Atlantic Alliance justifies the existence of opium poppy plantations, and does not see an alternative to the existing situation. Any objections of Russia will be perceived in hostility - diplomacy will not help. The United States has the tools to combat drug trafficking, but Washington does not use them.

The United States purposefully sabotage any plans to eliminate the Afghan drug business. The program "Rainbow-2", other proposals from Russia and the neighbors of Afghanistan are ignored by the owners of the situation. It seems that the artificial growth of drug trafficking in greenhouse conditions was one of the main tasks of NATO: all operations allegedly to destroy poppy plantations more closely resemble the play of actors on camera. With the Hollywood prowess, the American soldiers portray the burning of poppy crops and the defeat of the drug labs.

But in reality, over the past decade and a half, no concrete steps have been taken to combat the production of heroin. Are Americans afraid of an answer or benefit from the drug trade? It is not known for certain, but, apparently, the United States, after its departure from Afghanistan, hopes that Russia should solve the heroin problem, which will be the first to suffer from it.

Washington cowardly takes the burden of responsibility off and places it on Moscow and Beijing: you can figure it out without me. The one who has made porridge is not going to clear it up.