Ukraine. Systematic error of most analysts 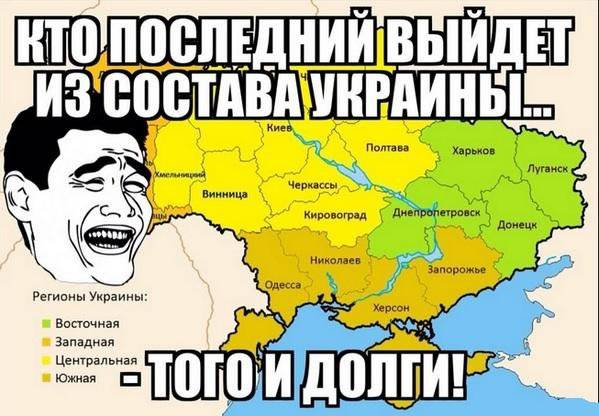 There is such a thing as a coordinate system and such concepts as a trend and the logic of a situation. And we must clearly understand that there is no point in analyzing the second without the first. Under the coordinate system should be understood moral and ethical basis. What is good, what is bad. What is allowed, and what punishment will follow. Who is ours and who is a stranger. Those. what sets both the ordinary person and society landmarks - system of identification of own-alien and fan of possible reactions. Usually, people do not think about it, taking it for granted, but now it is the reformatting of the basis that is being demonstrated in Ukraine. It is necessary to understand that in the process of this "reformatting" it is not the papers signed by the dummies in Kiev or the picture on TV that are important, but real steps showing strength. And as long as this process is not over, anarchy, banditry and mess will grow.

So, about the basis for analysis - the problem of most analysts who are trying to analyze what is happening in Ukraine is that they do not understand the main thing - an agreement who paid to whom, whose agent is in fact rippling on the water. In Ukraine, the basis has floated - there is no usual coordinate system. Most analysts are pure logic, and it is easier to deal with numbers than to realize the importance of the Idea and Morality. And so they are still discussing how Yanukovych behaved “ingeniously” during the confrontation with the Maidan. And in fact, all his political maneuvers mean nothing, since so far the VFYA conducted negotiations in the usual system of coordinates, the enemy destroyed the basis for the existence of such a state as Ukraine.

In principle, VFYa spoke about the main thing, when back in Kiev I asked everyone to think about the unity of the country. He did not understand only the most important thing: that the methods of working with the "basis" can only be power. And the destruction of the usual grid of coordinates requires the demonstration and use of force, and the task of preserving it requires the authorities to use a repressive apparatus. That is why no state that is going to live peacefully and develop further, will not allow such "standing on the Maidan" outright militants. Because such standing of unarmed Golden Eagles under Molotov cocktails is a demonstration of the weakness of the forces supporting the old system of coordinates. Signal of disease and weakness of the country's immune system.

For militants, the Maidan gave a feeling of its own strength and permissiveness. Now they are power. Now hundreds of Maidan new owners of the state of Ukraine. They will form a new coordinate system. What happens in the form of forming a government on the Maidan, managing the voting in the Rada by abducting children of deputies and fighting characters. The only question that is now on the agenda is the question of where the border of this base will pass - all of Ukraine will live in a new way or only Western.

Again, precisely because it is breaking down the old and forming a new basis, the Russian Federation declared that it would support the Russians only if they themselves demonstrate the will to win. Because to support carriers of an alien and hostile ideology (and tacit agreement is precisely CONSENT) would be just silly.

Returning to the analyst - the statements of the smoked junta, deputies or local governors are not as important as news:
"" The warriors of Narnia, "who seized the bank in Kiev, were released" (source). You understood that armed bandits began to rob a bank, the police arrived and after some negotiations released the bandits "for services to Maidan."

In Kharkov, during a rally against the smoked junta, several unarmed participants were killed. The captured killers were released.

Near Kiev, DPS are shot, and the perpetrators of this crime set free, as they are members of euromaidan.

This is not an exhaustive list of similar crimes and “release to freedom for merit before euromaidan.” There are much more cases like this - there are kidnappings with ransom for the “revolution case”, and robbery of enterprises and forced salary deductions for the “restoration of Kiev”, and the seizure of apartments and bases of the security forces. And it is precisely such news that is now important for an understanding of the situation in Ukraine, and not statements by Western politicians or a scribbled junta. I repeat: "These are not horror stories - hundreds of Maidan militants felt their strength, got experience and weaponThey have a clear ideology that does not imply work in factories or in the field. And they will not go anywhere. "The rest of the population of the territory will either agree to live with such an ideology, or not.

So the main course of events in Ukraine will look like this:

Preparation for the potential section - while there is confusion and vacillation in the form of meetings, statements and other elections of the people's governors in the country will increase mess, banditry and crime. You can forget about law enforcement agencies - they are waiting for a collapse, as they are the rudiments of the country's destroyed base. Galician fascists will try to forcefully bend under them a maximum of areas. And, frankly, watching the eastern regions blow off steam at the rallies, I think Euromaidanists will have a lot to do.

Bringing order - will begin only after the establishment of the basis. Those. after the dividing line between the "European vector with a fascist flavor" (those areas that accept this idea / power, should carefully look at the experience of the Rivne and Kiev regions) and "Russians and Little Russians" will be determined.

Judging by the fact that the eastern regions are being hampered for several months, it is possible that the division between these bases will be along Perekop. Because the Galician fascism no longer only has an Idea (albeit an ugly one), but also power structures ready to defend this idea. And now he is engaged in the expansion of food supply and building up forces. While the East can not even formulate its idea. The only hope is for numerical superiority and a huge shadow of a bear looming behind its back, frightening fascinating fascists too fast. But it’s impossible to hide behind the shadows for a long time ...

P.S. But let's not forget that, against the background of a certain tactical retreat in the Ukraine, the strategic victory of Russia becomes apparent - perhaps Western Ukraine has also shown its passion, but against this background Western countries have demonstrated their impotence in confrontation with Russia. By the way, not for the first time in a couple of years, the West demonstrates the weakness of its Idea. And Russia has its strength. That once again confirms the loyalty of the strategic conclusion about sunset west in general and USA in particular.

Ctrl Enter
Noticed oshЫbku Highlight text and press. Ctrl + Enter
We are
About Stalin and KhrushchevWhat you didn't want to know about England
Military Reviewin Yandex News
Military Reviewin Google News
197 comments
Information
Dear reader, to leave comments on the publication, you must sign in.