Pentagon: US and France will coordinate the review of military cooperation programs with the Russian Federation 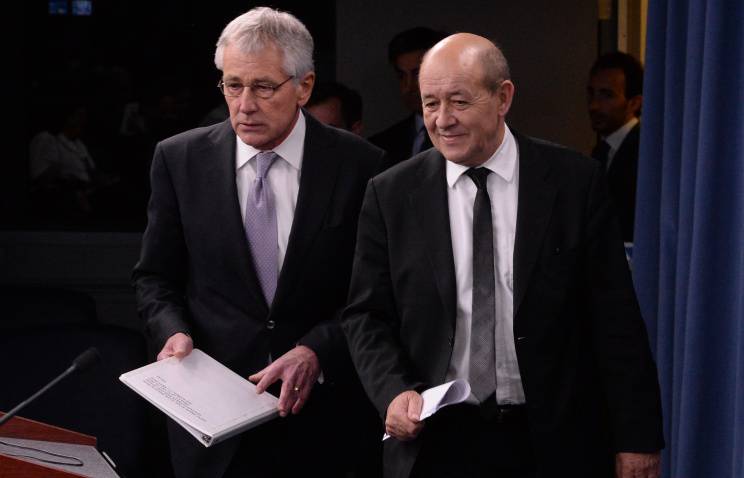 The United States and France agreed to coordinate the review of their programs in the field of military cooperation with Russia in connection with the situation around Ukraine. This was announced on Saturday by Pentagon spokesman Rear-Admiral John Kirby following a telephone conversation between the defense ministers of the two countries, Chuck Hagel and Jean-Yves Le Drian.


They "reaffirmed solidarity within NATO and discussed the need to continue close cooperation between the United States and France in order to support the allies in Central and Eastern Europe," said a spokesman for the US defense department. The ministers also discussed the revision of bilateral military cooperation with Russia in their countries and agreed that high-ranking US and French officials would continue close contacts on this issue in the coming days.

Earlier, the Pentagon announced that it was suspending military cooperation programs with Russia because of the events around Ukraine. France has not yet taken such a step, but on Saturday President Francois Hollande told reporters that this could be done in the future if Moscow does not change its approach to the situation in Ukraine.

Russian President Vladimir Putin, answering 4 March to journalists ’questions at his Novo-Ogaryovo residence, said that Russia's actions are based on international law and bilateral obligations - unlike the United States, which" clearly formulate geopolitical goals for themselves, and then they drag the rest of the world under them. " Answering the question about the threat of sanctions from the West, he noted that "those who are going to introduce them should think about the consequences of sanctions against Russia." "Damage in the global world will be mutual, and threats against Russia are counterproductive and harmful," the president warned.

Deputy Defense Minister Anatoly Antonov, in turn, said that the Defense Ministry had taken note of the decision of the Pentagon to suspend contacts between the United States and Russia.

"We paid attention to this statement. However, as well as to the statements of high-ranking military representatives of some other states," he said. "We presume that any interaction, especially through the military departments, can only be built on a mutually beneficial basis, the principle of strict parity. With this approach there can be no winners and losers," added Antonov. “We believe that as a result of the military’s communication, trust increases, certain intentions and actions become understandable. In the end, each other’s actions become more predictable, and the security of states increases as a result,” the deputy head of the Russian department said. “As for the decision of the Pentagon, this is the choice of the American side. We take note of it,” he said.

In addition, the Deputy Minister stressed that Russia fully fulfills its obligations in the field of disarmament, non-proliferation and arms control, enshrined in international agreements. "As for the existing agreements in the field of arms control, we intend to continue to fulfill international obligations and to continue the practice of voluntary transparency to the extent that it will be in our interests," said Antonov.