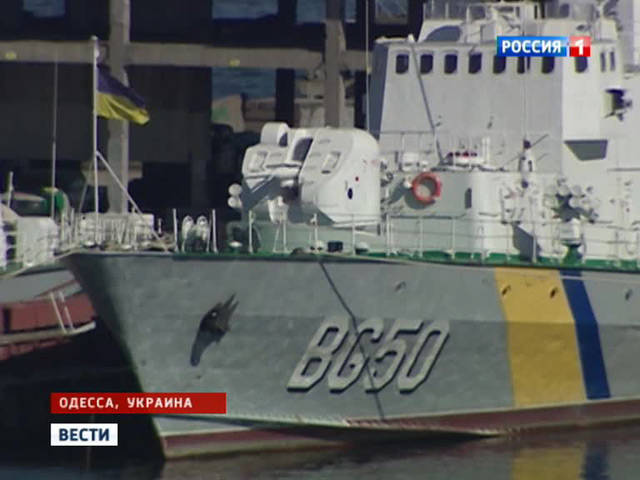 Purge continues in the Armed Forces of Ukraine - demoralized soldiers and sailors are examined for loyalty to the new regime. Doubters in exchange for support are promised apartments and high salaries. It is not clear, however, due to what. Perhaps the most obscure situation is with the Ukrainian Naval fleet. All that remained of him was the frigate “Getman Sagaidachny” and several boats, hastily evacuated from Crimea, where the Kiev authorities were going to disband all military units.

The fact that the "Hetman Sagaidachny" is moored somewhere in the military harbor, they know, perhaps, everything. Military naval officers from this ship can be found at the checkpoint to the port, but they all received orders to be silent and not to comment on anything, especially if questions are asked with a "Moscow" accent.
Now all that concerns "Sagaydachny" is a military secret, although the frigate can be well viewed from a height above the port. His airborne number, weapons, navigation equipment - the ship was a bright touch in the panorama of port Odessa.

The flagship of the Navy of Ukraine, the Getman Sahaidachny, has been at the anchorage in the port of Odessa for several days. On the one hand, it is securely covered by the coastline, on the other - by military boats. It is clearly seen that there is movement on the ship, people in naval uniform are walking, which means that the crew is on the ship and, perhaps, very soon it will be removed from the anchor and will be released into the open sea.

Special precautions have been taken: at the entrance to the naval unit, not only armed soldiers, but also police squads - an unspoken order to detain and transfer all suspicious people, especially with video cameras, to the SBU or the police. The crew members are intimidated by their superiors. Particularly closely monitor ethnic Russians.

Alexander Yakimenko, a retired colonel, a fourth-generation officer, a man who can say anything about the situation around a military frigate. He calls the arrival of “Sagaydachny” to Odessa “flight”.

"He is here only for the sake of one goal - at least something needs to be saved from these feeble Ukrainian Naval Forces. There is no other goal. People are forced to carry out the orders that today's government gives them," said Alexander Yakimenko.

Yakimenko is familiar with many officers. All of them tell about the deplorable state of ships and that Odessa is the only place where the fleet of Ukraine could be relocated. Now he remains here, consisting of one frigate and four military boats.

"Probably, it will stand until those forces come that say: enough, we played a war game, we need to build a new normal country," believes Yakimenko.

In order to somehow keep and keep the sailors from dismissal and transfer to the side of the Crimea, the current government promises untold wealth: apartments, large salaries and generous social packages. That's just the officers in this little believe.

"No gifts in the form of apartments, exorbitant wages of these seafarers will not keep. This is a forgotten army, not supported by anyone, not well-groomed, ruined to the bottom and the previous presidents, and all those who, during the years of independence, were engaged only in the collapse of the country," Yakimenko.

Now the Sagaidachny and several rusty boats are the Ukrainian fleet that escaped from Sevastopol. From the conversations of the military itself it is clear that many of them have lost faith in the command, are demoralized and do not believe in a bright future. The island of Crimea is somewhere very far away, and now it is new. история. And now, even in the safe until Odessa, a large military frigate Sagaidachny stands, as if locked under lock and key, and he has nowhere to go.