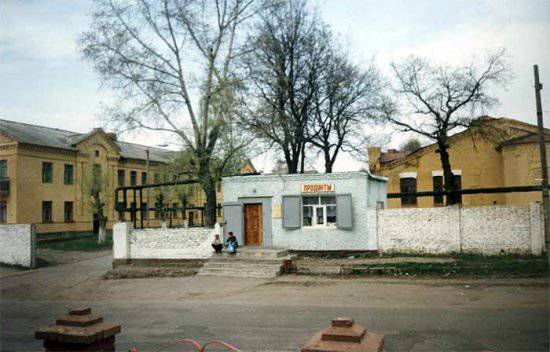 The head of the Russian Ministry of Defense, Anatoly Serdyukov, announced a reduction in the number of garrison military camps from 21 thousands to 184. Military camps existed separately from the entire state - they were financed by the ministry. In the course of the last twenty years, the Ministry of Defense did this very disgustingly: the housing stock was not repaired, the military campus became the foremost in the number of unfit housing. Now the government has transferred this headache to the municipalities, but has not allocated funds for them to solve this problem. Moreover, even in those rare cases when municipalities can do something, due to the fact that the transfer of ownership is not documented, they are powerless.

Military camps are not in vain located "far from civilization." They were built so in case of war, so that the enemy could not find military units (besides, it is not easy to maintain military discipline in a civilian city). Since the beginning of perestroika, most of the military units were reorganized or liquidated, but the objects around them, out of habit, retained the status of military camps. In such settlements is absent weapon and military equipment, and the population for the most part became civil. At present, such objects are not similar to the military camps of the past, where almost all men wore uniforms, and all organizations (up to cinemas, hotels and shops) were subordinated to military regulations.

The quartering and arrangement service of the Ministry of Defense (SRiO), which was obliged to deal with military camps, was fascinated by other tasks. All the work of the SRiO was aimed at achieving the so-called. strategic objectives, including: the restoration of Chechnya, the formation of the infrastructure of the Plesetsk cosmodrome. Household issues were ignored by SRiO, high-profile projects became priorities for the Service. Support military camps can not be glorified. After all, it is of course the default ...

A former employee of the SRiO, a lieutenant colonel in the reserve, Alexander Perendzhiev, says that as soon as A. Serdyukov came to the post of minister of defense, he began to talk about all the financial issues in military construction. According to Perendzhiev, this is a criminal connotation. It was at that time that Colonel-General Viktor Vlasov, who served as the head of the SRiO, shot himself to death.

At the same time, the process of complete liquidation of the military-construction complex began. Experts are gone, the device is razval. It is now impossible to understand the problems of military camps: almost all the documentation has been lost due to the fact that the institutions that designed the towns were disbanded. The MoD does not hold specialists capable of engaging in military camps, therefore there is simply no one to solve these issues. In addition, the officer says, the efforts of the building complex of the Ministry of Defense are going to fight against the mayors of Moscow for the objects. And there is no time for the military camps. The fact that the Ministry of Defense of the Russian Federation has thrown them off is quite natural, and that was all.

Today, military camps are in poor condition. The situation with health and education is terrible. Housing and communal services impoverished to the point that boiler rooms fail. There is simply no work, and people are turning into a half-bomber, says A. Perendzhiev.

The best way out of this situation, according to the lieutenant colonel, is the resettlement of military camps, and not their restoration. People need to provide housing in normal localities. The state has the means for this, after all, they built the same housing for the victims of the summer forest fires.

In the public organization “Defend the Fatherland”, the current policy of the Ministry of Defense is also condemned. Lieutenant Colonel Sergei Zudov, co-chairman of the organization, says that the position of the Russian Defense Ministry is unethical. At first, the ministry did not fulfill its duties with respect to the military camps, and now it has completely abandoned responsibility. According to him, before giving the military property to the municipalities, it was necessary to put it in order. Or it was necessary to renounce military camps as the army units were liquidated in them. With this approach, this would occur gradually, and now it would not have been a puzzle to get money to restore the entire infrastructure of the former military camps at once.

The Ministry is irresponsible even to shifting responsibility for the military camps. It does not execute documents and thus delays the transfer of military property to local authorities. As a result, local authorities remain paralyzed. For example, the officer says, in the Moscow region of Stupin, the land that is under the unfinished construction of the ministry will not pass into the ownership of the municipality. The local authorities, due to the fact that the land is not in city ownership, are not eligible to begin construction. These costs may be recognized by law enforcement agencies as inappropriate, and employees of the local municipality may incur liability, including criminal liability.

The manner in which the Ministry of Defense behaves is natural bungling, says State Duma deputy Gennady Gudkov. In his words, since the MoD throws off the ballast, it must do so competently. In their actions there is no even small legal policy. The actions of the ministry are hasty, ill-considered and destructive. In addition, you can not completely exclude the elements of profit. Residents of military camps, where there are modern sports complexes and swimming pools, expressed concern about the visits of traveling salesmen visiting this property. The military fear that the Ministry of Defense has built similar facilities for the purpose of selling them.

In addition, no program document specifies the problem of military camps and the ways to solve it. As if the problem does not exist. The State Duma does not consider this problem, the government does not make any decisions. The current situation requires the intervention of the top leadership of the state.