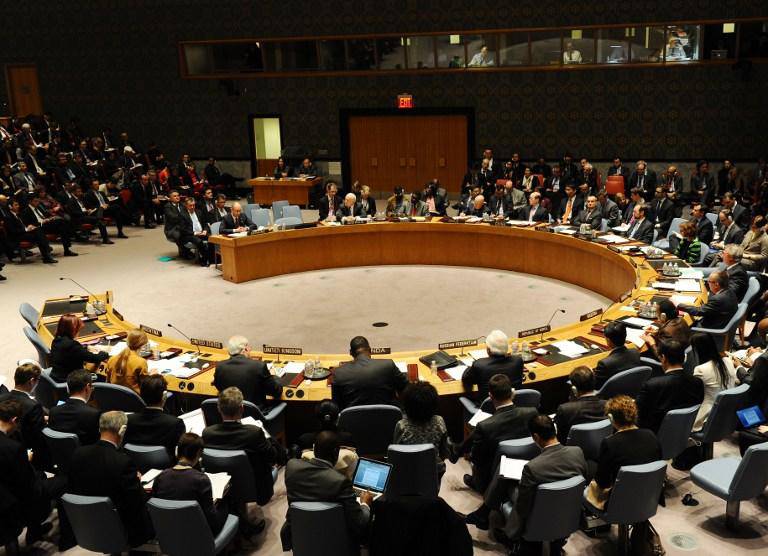 The UN Security Council today held a vote on a draft resolution prepared by the United States, stating the illegality of the referendum in Crimea. Security Council members supporting the self-proclaimed power in Kiev, set the task to certainly submit the document for review before March 16, when the referendum is held. Russia voted against the draft. China abstained. The remaining participants voted for the resolution.


In his opening remarks, Russia's permanent representative to the UN, Vitaly Churkin, said that the Russian Federation could not recognize the referendum in the Crimea as "unenforceable."
“Such a philosophy goes against the principle of self-determination of peoples, confirmed by a number of international documents,” Churkin said, adding that Russia will respect the choice of the Crimean people.

The Russian diplomat recalled that the Crimea before 1954 was part of Russia and was transferred to Ukraine in violation of Soviet legislation and without taking into account the opinions of the population. After the collapse of the USSR, the peninsula automatically turned out to be part of Ukraine. For more than twenty years, the Crimea tried to exercise its right to self-determination. Moreover, in 1991, the Supreme Council of Crimea adopted a declaration of sovereignty, and a year later - a constitution proclaiming Crimea as an independent state within Ukraine. But in 1995, it was canceled by the President of Ukraine and the Verkhovna Rada without the consent of the Crimeans.

Speaking at a meeting of the UN Security Council, Churkin also noted that in the hands of national radicals supported by the West, the blood of those Ukrainians who were shot by snipers in February of this year. He recalled the events that occurred the day before in Kharkov, where militants fired on civilians. According to Russia's Permanent Representative to the UN, those who say that there is no violence in the country “apparently didn’t get to know the latest news summaries. "

Churkin stressed that violence did not happen in Crimea only due to measures taken by Russia. He also noted the role of the United States in the situation in Ukraine. “The world would learn a lot if Washington spoke about its role in the events in Ukraine,” the permanent representative said.

He also noted that Kiev should have reached out to its regions, instead of scaring people with repressions.

For its part, the representative of the United States to the UN, Samantha Power, announced that Russia used its veto right only to “justify a military invasion of the territory of Ukraine”.

Today, the Russian Foreign Ministry issued a statement that the Security Council’s draft resolution had no basis, since the events in Ukraine do not pose a threat to international peace and security.

It should be noted that the members of the UN Security Council, supporting the self-proclaimed power in Kiev, set themselves the task of certainly submitting the draft resolution for consideration before March 16, the date of the referendum on the issue of Crimea joining the Russian Federation.

The latest version of the draft resolution, which Russia finally blocked, stressed that “Ukraine did not authorize a referendum on the status of the Crimea” and “cannot ... serve as a basis for any changes in the status” of the peninsula. Western diplomats at the Security Council were aware that there was no chance of adopting a resolution. “No one doubts that Russia will use its veto power,” one of them, ITAR-TASS, said on the eve. Despite this, the West is ready for the next step - the adoption of a resolution in the General Assembly, where a simple majority is sufficient for this. However, it is worth noting that the resolutions of the Assembly are not obligatory for implementation and are only recommendations.

Ctrl Enter
Noticed oshЫbku Highlight text and press. Ctrl + Enter
We are
The action “Military service under the contract is your choice!” In Rostov-on-Don: future contract servicemen, exhibitions and “Russian Knights”
Military Reviewin Yandex News
Military Reviewin Google News
233 comments
Information
Dear reader, to leave comments on the publication, you must sign in.