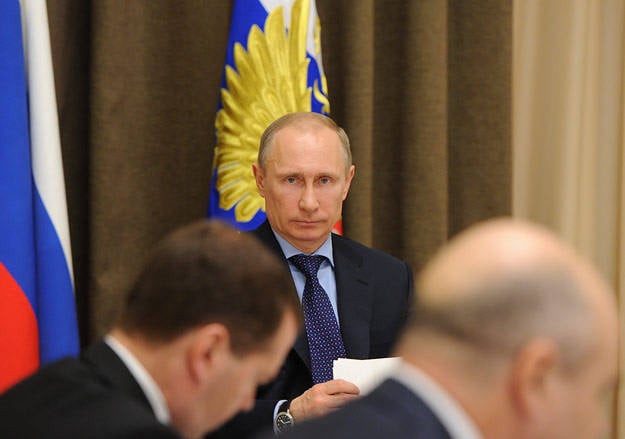 Vladimir Ilyich Lenin said that in a difficult political situation it is important to determine the “main link” of events: by grasping it, one can “pull out” the whole situation. Today, such a “link” in Russia is President Vladimir Vladimirovich Putin. The best proof of this is the frank and consistent demonization of his Western media, although he enjoys undoubted prestige throughout the world, has repeatedly been the "man of the year" by the versions of many reputable Western publications. Why so?

In the person of V.Putin, Russia received an outstanding, it is time to recognize that a statesman who manages to defend Russia's national interests in the face of the entire Western world community. This alone for the “world press” is a sufficient reason for its defamation, as a serious opponent of the West.

But this is not all: Putin is opposed to Washington’s foreign policy strategy to achieve absolute dominance on the planet. This strategy is covered by democratic phraseology, but it comes out every time when Washington makes another breakthrough to world domination. Like today, with the capture of his militants, and neo-Nazi, Ukraine. And the rule of law, democracy, and the right to free expression of the people’s will immediately give up.

This true strategy of Washington is called “controlled chaos”, it’s also the “Orange Revolution”, it’s also “promotion of democracy” in the world. This is the sum of ways to destabilize the country being attacked by Washington, scenarios of state coups to transfer power to its puppets, or to extract other dividends, for example, simply looting, like Libya.

The main condition for the success of such a “peaceful” aggression is the creation of a situation in a society chosen as a victim: “weak president” - “weak government”, deprived of the support of a significant part of the population. In order to create such a situation, NGOs and NGOs are being introduced into the “non-Western native country” under plausible excuses.

Formally, they are engaged in the creation of an active "civil society", but in reality the artificial political environment they create begins to mercilessly criticize (or rather, poison) their state, government, country (its history, culture, exposing them flawed).

Everywhere there are many problems, everywhere there is corruption, and “civil society” is trying to inflate them, exacerbate, even invent problems from scratch (for example, homosexual), and declare them outrageous and accuse the president of them, the government. And offer the only remedy - "regime change" in the pro-Western government.

And also to seduce the natives: to promise that they will live even better than they do now, as in the West, you just have to ... shift “this government”, “this president”, etc. The trick is simple, but it works, it was on this hook that they faked Ukraine: they were seduced by the “European future” ...

From this point of view, the seemingly irrational slogan of our creators, NGOs, NGOs and the “civil society” created by them: “Russia without Putin,” for any reason, even ridiculous, acquires a specific political meaning. It derives from the mission, the orange revolution in Russia.

Because under Putin, the “strong” president, the orange coup in Russia is impossible, and the United States in the West, and the conductors of his “soft power” in Russia, are doing everything possible to discredit him. Remove one way or another, Putin and road orange revolution. Their arrogance has already passed all borders: it came to the point that US Vice President Joe Biden, being in Moscow, publicly "did not recommend" Putin to be elected ... This can be qualified as diplomatic aggression.

After the Bandera coup d'état provoked by the States in Ukraine, which threatens to turn into a global crisis, such as the Caribbean, the pro-Western "soft power" in Russia, as before, the "fifth column" became more active. Its task now, like all “fifth columns”, is to sow panic, to undermine the will to resist from its people. Therefore, it should be put on a specially designated "place", such as is assigned to similar columns in the West.

And we must give all possible support to President Putin and his team: today he is both a symbol and the only hope of preserving Russia's independence in the face of American aggression in Ukraine.

Ukraine will remain for Russia, in any case, a brotherly country, but today the American puppets who have seized power are building an anti-Russian regime in Ukraine, and a Bandera, Nazi regime. He is hostile to Russia, and there can be no friendship with him, and Bandera has no rights to the Crimea. Legal crossed February an armed coup. And the moral ...

Russia did not object when Crimea became, as it were, its dowry to a fraternal, allied Ukraine, but not today's Bandera. If this Ukraine makes a “Euro choice”, then the dowry must be returned.

The Kiev regime is now creating the Bandera National Guard, this is a direct threat to all Russian-Ukrainians, all Russian-speaking in Ukraine. And Putin’s previously incomprehensible words that “the servicemen of Russia and Ukraine will be on one side of the barricades” acquire meaning. Now it is clear who will be on the other ...

Ctrl Enter
Noticed oshЫbku Highlight text and press. Ctrl + Enter
We are
Results of the week. “As Comrade Lenin commanded - to work, work and work - and then there will be many, many money!”Situational analysis of the death of the MH17 flight (Malaysian Boeing 777), made on the basis of engineering analysis from 15.08.2014
Military Reviewin Yandex News
Military Reviewin Google News
257 comments
Information
Dear reader, to leave comments on the publication, you must sign in.