The beginning of the global end 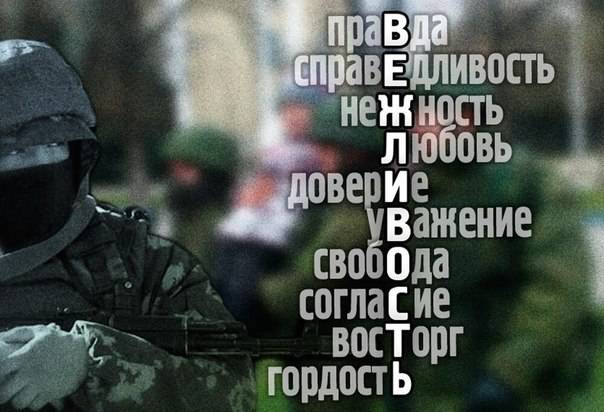 Let's already deal with the concepts.

1. For peace.
Here we have rallies “for peace” have drawn, which means: against Russia. Of course, “for the world” is conscientious, and it sounds not so treacherous. But alas, this is a lie.
For Peace today is for a peaceful referendum in the Crimea. Military actions today can unleash ONLY the Ukrainian right-wing party. Russia and Crimea need peace.
Are you for peace? = you are for the right of Crimea to hold a referendum peacefully, or there is nothing for people to powder their brains.

Otherwise, you are for the war, and do not deceive your mother and CNN.

Against the "cold war", especially the third world war, today, again, Russia, whatever you say. Ukraine all this time has been a state of compromise: Russians with Ukrainians, the West and Russia. The compromise was broken not by Russia and not by Russians in Ukraine. A deep association with the EU, in fact, Ukraine’s transition under the control of Euro-Atlantic structures, including the military sphere, is a serious violation of the post-war and post-Soviet “status quo” in Europe. Chatter about the "free" choice shove yourself back to Europe: then in the country almost 1000 of Western funds would not hang out all these years. Thanks maidan: woke up the Russians and the Kremlin. Crimea has the full right to decide whether it is along the way with IT Ukraine. The fact that the Russians “lost forever” the Ukrainians is now tell your friends about the “Volyn massacre” to the Poles. We are not interested.

More dangerous than the other. It was exactly the Ukrainian events that began, it seems, the beginning of the formation of a completely new, post-Western world order. Maidan can be the beginning of the end of global unipolarity. And the West understands this perfectly well, so all the risks today are not from Putin, who is quite adequate to the situation, but from the West, which can break, realizing that everything is at stake - EVERYTHING.

2. For democracy and against authoritarianism.
For democracy in Ukraine today Russians and Russia. For the right of people to use their own language, against the violent de-Russification and Ukrainization, which was more than 20 years, contrary to European conventions. For the right to exit territories with a non-titular nationality, if the central power is seized by the nationalist junta. For a change of power by fair elections, not by burning tires and "dancing men." For law and order, and not for the bastard with a gun, intimidating the authorities. For a European-style democracy, and not for the self-designation of Bandera fans and nationalists.
"On Independence, not everything is for Bandera and the Nazis" - in this case it does not matter at all: if you are with them along the way, if they are in your ranks, if they have become the shock force of the coup, if they now manage in the country - then talk please about evil Yanukovych and corruption: you are - they are. If you piss in a barrel of wine, you will have to pour the entire barrel. Or drink it to the bottom and tell Nuland and her cookies that you are, in fact, for freedom. But do not be surprised that someone with you is not on the way.

3. In Russia, not everyone supports the Kremlin’s policy, there is, they say, “another Russia,” “other Russians,” and they are on the side of the “new Ukraine”.
Remember: NO "other Russia" and "other Russian." This is not Russia, but its internal opponents, something national-unique — Russian Russophobia. This is nowhere else in the world. These are no liberals - for Western liberals in such matters are almost always on the side of their states. This is our Smerdyakovism, the traditional rejection of the part of the intelligentsia, which in critical situations always turned to the side of opponents and enemies of its people. What to do in the family is not without cracks.
What the Kremlin is doing is supported by people here because it expresses their will. If it stops, it will not be supported. Liberals, conservatives, leftists, rightists, pro-Putinists, and anti-Putinists have united around this today: again, thanks to the Maidan. We now clearly see who has the right to participate in Russia's domestic policy - even with the harshest criticism of the authorities. Even, perhaps, with his Maidan, if the power of that will deserve.

But there are those who crossed out of Russian politics themselves. They are today with Kiev, with Sashko Bilym, with Nuland and McCain, with anyone, but not with Russia. Their idle talk about the fact that they are “against Putin, against the war, and not against Russia,” is sent to the same place where the myth of the Maidan rush to freedom and democracy goes to the annals stories.

Ctrl Enter
Noticed oshЫbku Highlight text and press. Ctrl + Enter
We are
A great interview with Sergey Lavrov: about Ukraine, Obama and IranWhat you didn't want to know about England
Military Reviewin Yandex News
Military Reviewin Google News
168 comments
Information
Dear reader, to leave comments on the publication, you must sign in.