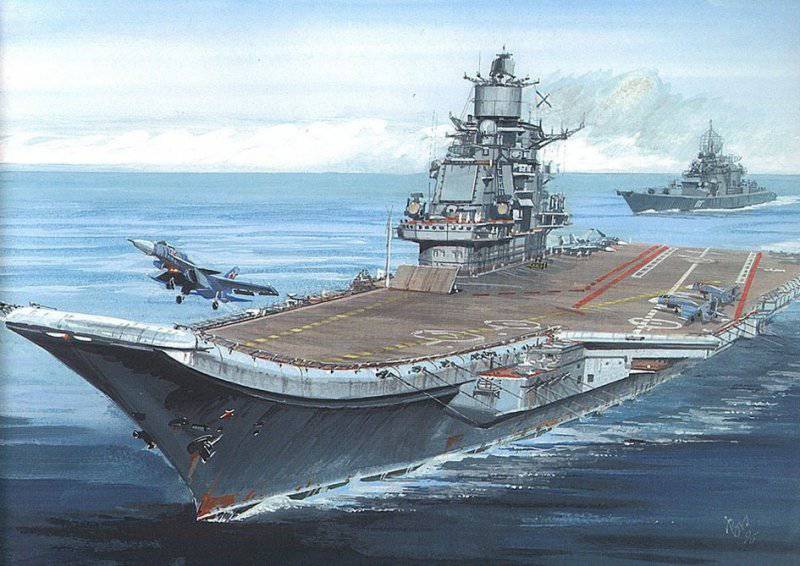 Revival of the Navy fleet The USSR is directly connected with the events of the winter of 1955-1956. - the rapid resignation of Admiral N.G. Kuznetsov, followed by the assumption of the post of Commander-in-Chief of the Navy Sergey Georgievich Gorshkov. The new commander-in-chief chose a firm course towards the creation of an ocean nuclear missile fleet. For the first time since the beginning of the XNUMXth century, our sailors managed to declare themselves far from their native shores.

From high Arctic latitudes to the warm Indian Ocean, Admiral Gorshkov's ambitions grew in proportion to the ambitions of the Soviet Union. Strengthening the value of the fleet as a tool of geopolitical influence, coupled with rapid scientific and technical progress, allowed Gorshkov to "knock out" funds for the creation of extreme samples of marine weapons. The Soviet commander-in-chief seriously expected to become the lord of the five oceans!

Already in the first half of the 60-s in our country began the design of surface ships of the ocean zone with nuclear power plants: heavy aircraft-carrying cruisers, missile cruisers and anti-submarine ships. With 70-x began their active incarnation "in the metal." If everything had turned out as planned by Gorshkov, by the end of the century a squadron would appear in our country, having no equal in combat power.

The first Soviet ship of this type and the first nuclear aircraft carrier built outside the United States. Even now, despite all its obvious weaknesses and atavisms of design, the 1143.7 project inspires respect with its huge size and stately, majestic silhouette.

Of course, Ulyanovsk was inferior to its main and only rival - the American aircraft carrier of the Nimitz type. The domestic aircraft carrier had a smaller displacement by a quarter, carried a smaller wing and had more constrained conditions for the deployment of aircraft. Only two starter catapults against the Nimitz’s four, three aircraft lifts instead of four, a smaller hangar (almost 1000 square meters). 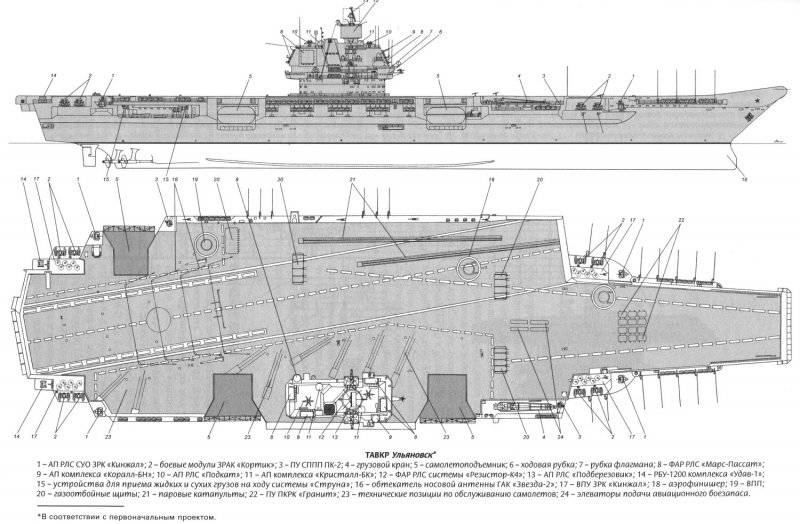 Missing catapults were partially compensated by a nasal springboard with two starting positions. Such a decision saved millions of Soviet rubles, but caused new difficulties. Taking off from a springboard is only possible for aircraft with very high thrust-to-weight ratio - but even for powerful 4 generation fighters, such a focus is fraught with severe limitations on take-off mass and combat load. Finally, the springboard made the entire nose of the ship unsuitable for parking aircraft.

The solution with placing on the 12 aircraft heavy aircraft anti-ship missiles P-700 “Granit” - the underdeck launch system for 7-tonnage missiles “ate” the precious space and reduced the already small hangar looks rather meaningless. An additional link of "Dry" would be much more useful than these huge one-time "blanks" with a length in excess of 10 meters. 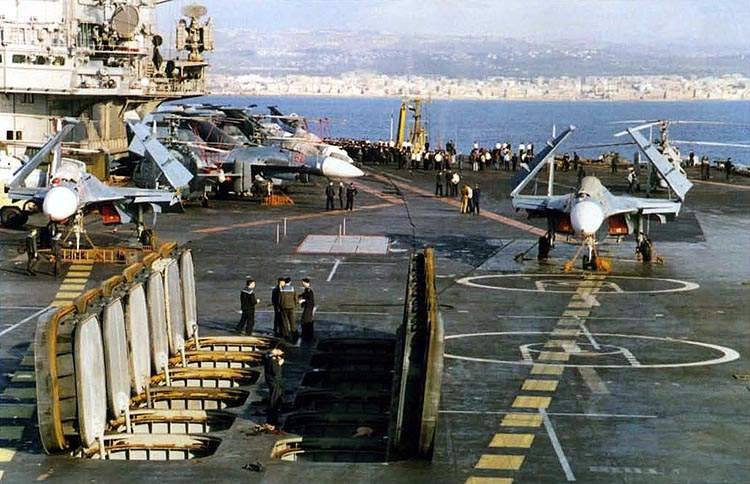 But the “first pancake” was not a “lump”! The Ulyanovsk possessed a pleiad of remarkable virtues — like all Soviet aircraft-carrying cruisers, the 1143.7 av. Had inherent excellent self-defense systems. 192 anti-aircraft missiles Zerk Dagger + 8 modules ZRAK Kortik (however, you should not overestimate Ulyanovsk’s air defense, Dagger and Dirk, this is the last echelon of defense, the maximum range of missile launch does not exceed 12 km).

The complex of radio detection equipment planned to be installed on Ulyanovsk is a song! Mars-Passat radar with four stationary HEADLIGHTS, an additional far-range radar “Podberezovik”, a pair of radars for detecting high-speed low-flying targets “Podkat” ...

Such a multifunctional radar complex promises to appear only on new American aircraft carriers like the Ford (it’s not worth scoffing about problems with the capricious and unreliable Mars-Passat) - the modern American Dual Band Radar is also far from achieving operational readiness).

According to the widespread data, the composition of the Ulyanovsk wing was as follows:
- 48 fighter MiG-29K and Su-33;
- 4 Yak-44 long-range radar detection aircraft (“flying radar”, AWACS);
- up to 18 anti-submarine and search and rescue helicopters of the Ka-27 family. 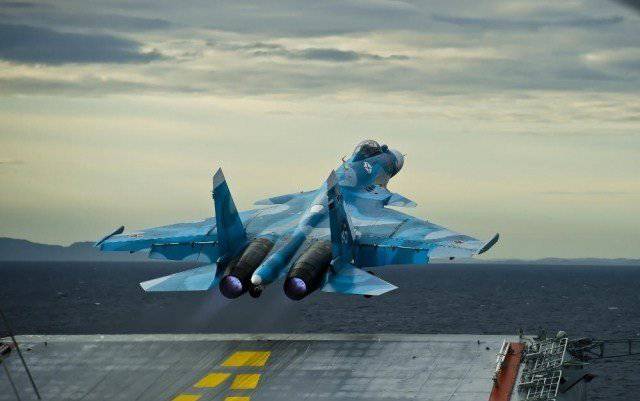 In reality, such a number of aircraft was excluded. On board at the same time could be no more than half of the specified number of aircraft, otherwise the flight deck and hangar would become an impassable warehouse of scrap metal (the same is true for the "Nimitz" with its 90 aircraft).

The Ulyanovsk air wing did not include a variety of attack aircraft, tankers, and anti-submarine aircraft — only powerful fighters and AWACS. Soviet lag in the field of maritime aviation suddenly became an advantage!

As practice has shown, the shock capabilities of even the most powerful aircraft carrier are negligible. The only priority task of the "floating airfield" is air cover of the squadron on the ocean communications. In matters of air combat, the Ulyanovsk wing of air could give odds to the wing of any Nimitz and Enterprise: F / A-18С had no chance to resist Su-33.

The final was sad. After 4, after the laying, the unfinished Ulyanovsk building was dismantled for metal. As of the end of 1991, its availability was estimated at 18,3%.

Superavian needs superexort! The task of the zonal air defense was assigned to the atomic “Orlan” with “gloated” C-300 systems. In fact, this ship was created as an autonomous combat unit with a full-fledged composition of attack and defensive weapons - the embodiment of the dream of an “ocean bandit” capable of dealing with any adversary.

The atomic cruiser carried the full range of weapons of the USSR Navy, with the exception of ballistic missiles. At the time of the launch of the head "Kirov" (1980 year), many of its innovations did not have analogues in the world: underdeck launchers, heavy supersonic anti-ship missiles, long-range anti-aircraft systems, advanced fire detection and control systems (such as the Polynom GAS or radar ZR-41 "Wave" of the C-300F complex), a system for obtaining target designation from MKRTS satellites, armor belts and horizontal protection ... The creators of the Orlan despised any compromises and selected only the best technologies for their ship. 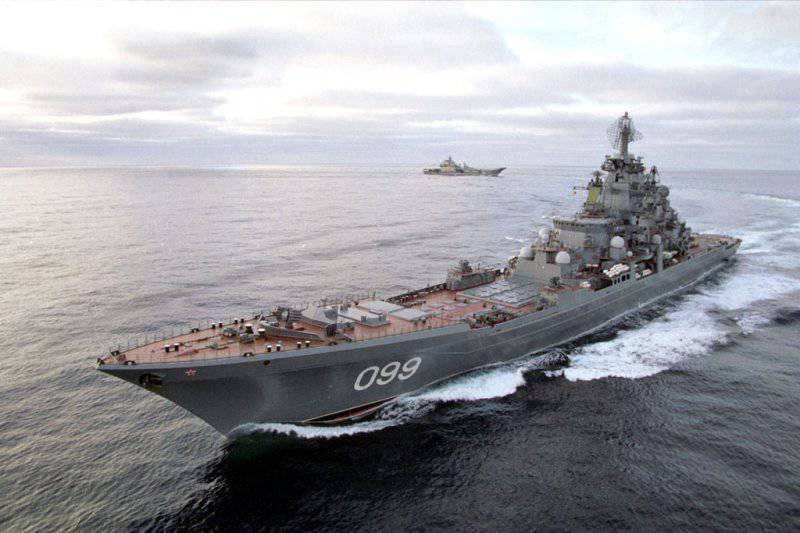 The "Eagles" turned out to be huge, complex and monstrously expensive ships: with a length of a quarter of a kilometer and a total displacement of 26 thousand tons. Nevertheless, nuclear-powered cruisers are the only component of the super-squadron that received a “start in life”. In the period from 1973 to 1998, four such ships were built, each of which had noticeable differences in the composition of weapons and radio systems. 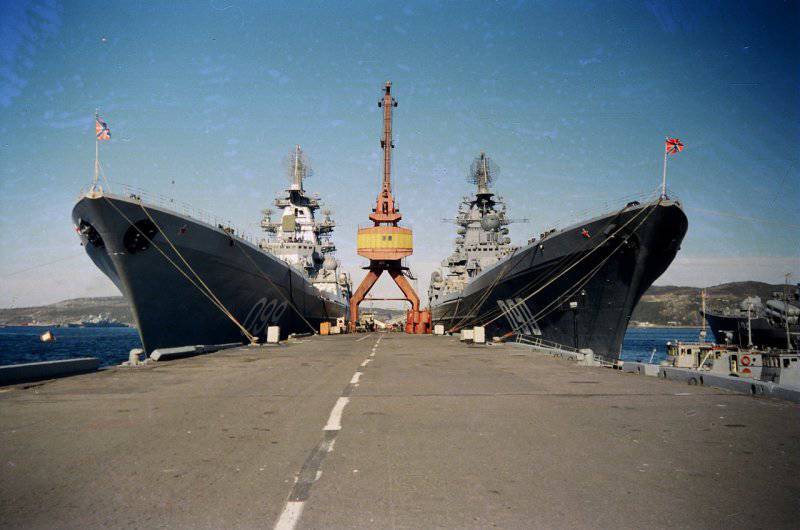 At the moment, two cruisers - "Admiral Ushakov" (formerly "Kirov") and "Admiral Lazarev" (formerly "Frunze") are withdrawn from the fleet and put in sludge. "Admiral Nakhimov" (formerly "Kalinin") is undergoing intensive modernization at Sevmash. It is planned that the cruiser will return to service in the 2018 year. The fourth and most accomplished Orlan, the flagship ship of the Northern Fleet, Peter the Great, regularly participates in long-distance ocean voyages, speaking in the framework of the concept of the “superiority ship at sea” concept.

Perhaps the most mysterious element of the Soviet super squadron is the atomic anti-submarine ship in the security of atomic aircraft carriers of the 11437 Ave.

Work on Anchar was carried out in the Northern Design Bureau since 1974, but the atomic BOD project was never realized. The reason is exceptional cost with unobvious advantages. A nuclear power plant has large weight and size characteristics and a higher cost compared to a conventional gas turbine. The complex design with several reactor cooling circuits and biological protection systems, fuel and further problems with its disposal - all this left a negative imprint on the size and cost of operating the Anchar itself.

According to the official TTZ of 1976, the standard atomic BOD displacement should not exceed 12 thousand tons. But even with such a “restriction”, the nuclear anti-submarine ship turned out to be two times larger than the usual BOD or the destroyer of that time!

Model atomic BOD "Anchar"
However, they also didn’t refuse to use the conventional power plant: one of the priority options for the layout of the future BOD was a scheme with a PPE of economic progress and afterburner gas turbines to accelerate the ship to speeds above 30 nodes. It is easy to imagine how much this technical “misunderstanding” would cost the budget!

However, the nuclear reactor was not the only “stone on the neck” of the “Anchar” project. Much more serious is the fact that the designers and developers deliberately did not seek to limit the displacement of their ship. As a result, repeated история with "Orlan" - "Anchar" received all new systems and weapons, which raised the cost of an already expensive BOD to the skies. The large anti-submarine ship turned into a multi-purpose nuclear-powered cruiser, more focused on the performance of air defense functions than on the defense of the compound against enemy submarines.

As a result of all discussions, it turned out that the Soviet Navy is not at all interested in nuclear BOD. Seafarers need "workhorses" - cheap BOD and destroyers suitable for large-scale construction.

It was not possible to fill the ship with super-expensive atomic BOD. And to include in the forces of the aircraft carrier escort ships with conventional GEM would practically mean to level all the advantages of Anchar in autonomy and high speed. Also, it was not worth forgetting that autonomy is limited not only by fuel supplies, but also by food supplies, ammunition, reliability of mechanisms and endurance of the ship’s crew. According to these parameters, "Anchar" had no advantages over the usual destroyer.

Based on the research, a pure gas turbine project BOD 11990 was developed. The refusal of a nuclear reactor allowed to improve the combat qualities of the ship. The released space and load reserve was spent on installing more powerful weapons. In the end, the choice was nevertheless stopped on a combined power plant: YPUPU + afterburner GTE.

The head "Anchar" was planned to be laid on the Nikolaevsky CVD them. Communal 61 at the end of 1980's. However, soon all the work on the BOD was stopped, and according to unconfirmed data, the GEM already prepared for it was decided to be used to equip the Varyag missile cruiser under construction (1164 Ave.). With the beginning of perestroika, it completely disappeared ... 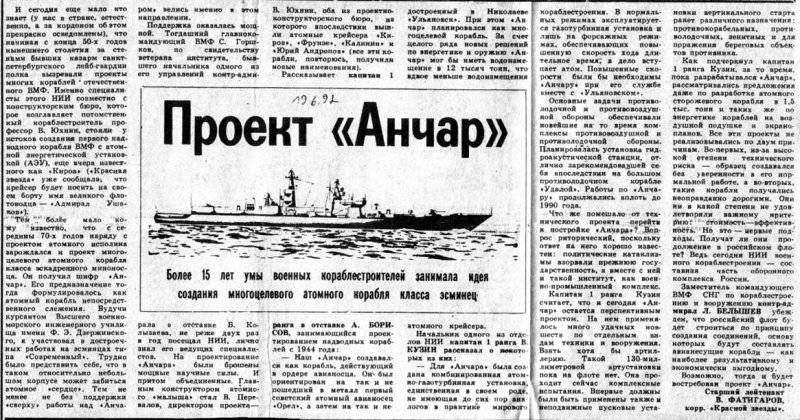