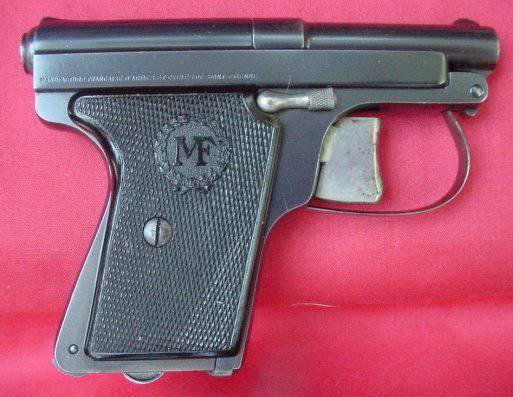 Founded in 1885 by Pierre Blanchon and Etienne Mimard, Manufacture Francaise d'Armes et Cycles de Saint-Etienne (MANUFRANCE) (MFAC), shortly before the First World War, began production of a new automatic gun, Le Francais . MFAC is private armory a company, it is sometimes confused with a state-owned enterprise, which had a consonant name and was even located in the same city (this is Manufacture Nationale d'Armes de St. Etienne (MAC), manufacturer of the Petter pistol 1935). 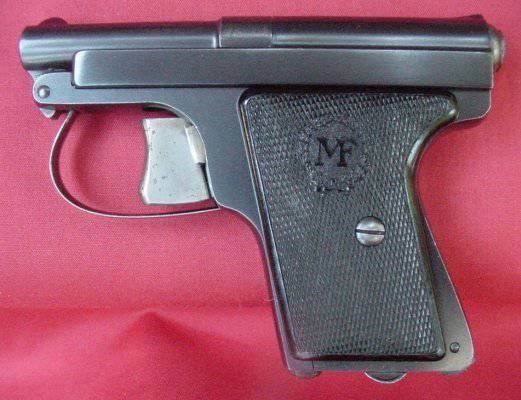 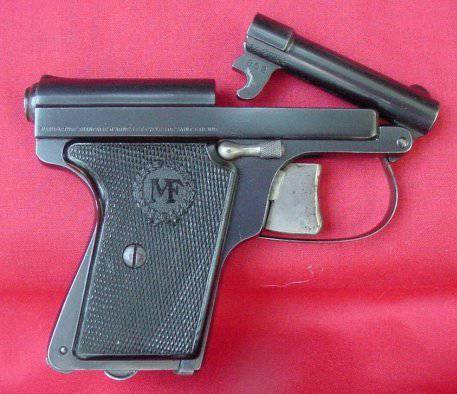 Pistols of the Le Francaise MPAC company Le Francaise differed from the design of the Browning system generally accepted at that time and were made for cartridges of several calibers: 6.35; 7,65 and 9 mm. Around the end of the twenties, pistols of this type appeared, made in several, slightly different from each other versions, for cartridges of all three of the above calibers. All versions of the pistols have a similar principle of operation and design, differ only in some features of the individual parts of the weapon. 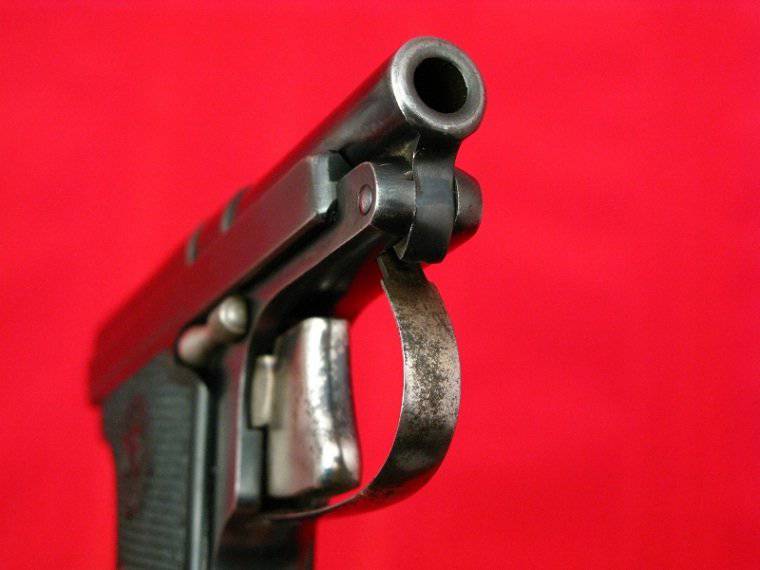 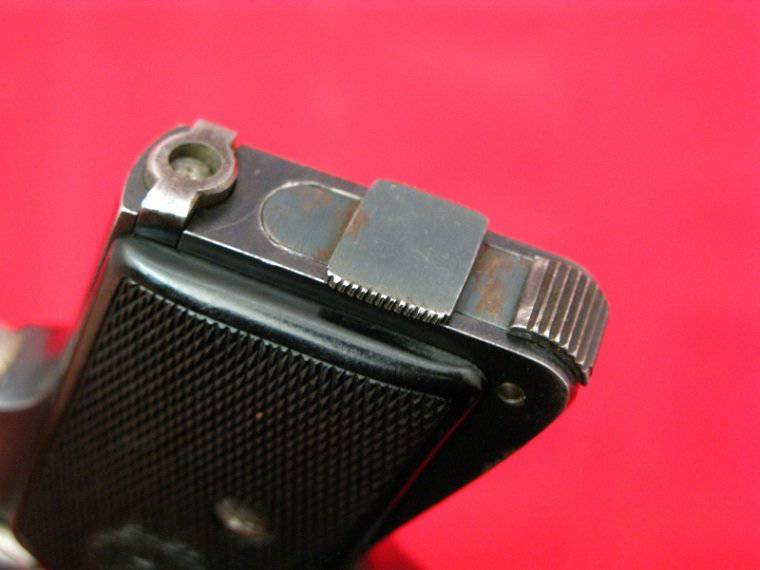 There are various points of view in various sources on the date when the first Le Francaise pistols from the 1910 year to the 1914 year began. It is only known that one of the two creators of the company, Etienne Mimard, obtained a patent 6 in August 1913 of the year under the number 472,505 for a gun. “Modele de Poche” (“pocketmodel”) appeared in the company's catalog for the first time in 1914. Weapons caliber 6,35 × 15,5 HR (6,35 Browning) with a barrel length 88 mm was the first version, the length of the weapon reached 154 mm, height 95mm, width 25 mm, weight with curb 410 gr. (without the 360 gr. store), the barrel bore had an 6 right-angle cut. The 1928 — 1929 was launched in the year. An 6,35 mm caliber pocket pistol was launched, but with a shortened barrel, the length of which was 60 mm.
Le Francais pistols have distinctive design features: a firing pin driven only by a trigger; pivotally mounted in the frame of the trunk, which for equipment leans top; return spring placed in the handle in front of the store.
The action of Le Francais’s “Modele de Poche” (“pocketmodel”) automatic pistol is based on the use of recoil energy of a free gate. 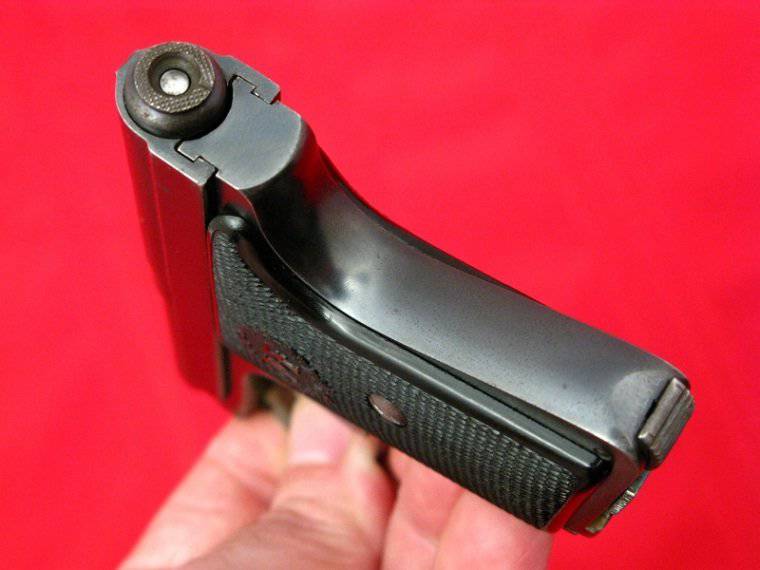 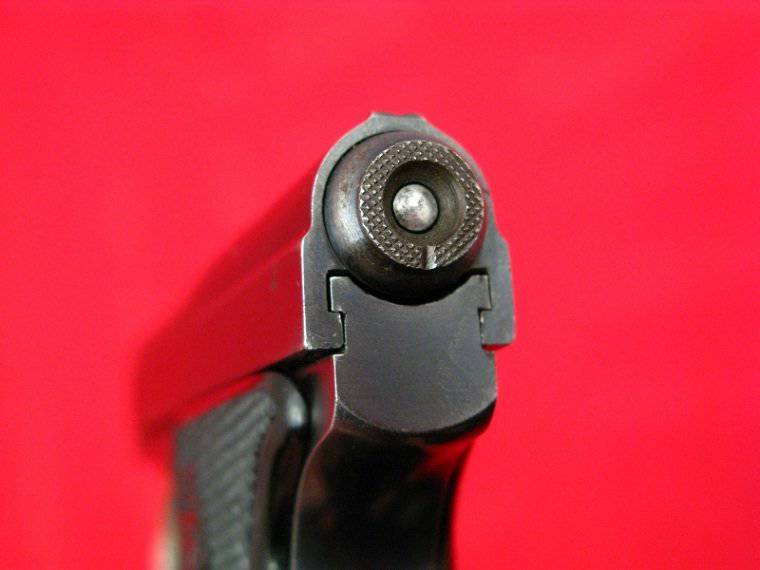 A round valve is located in the rear part of the bolt body of the smallest caliber weapons (this applies only to pistols with a longer barrel). The valve is connected to the spring of the firing pin, keeps it, and with it the firing pin itself, performing in effect the function of the fuse. Although other versions were also equipped with this kind of safety device, they did not have a protruding valve. Behind the trigger trigger is a spring grip, which is connected to the drummer. He releases the drummer only when he reaches the extreme position, after which the drummer rushes forward under the action of the spring, smashing the striker into the caps - a shot occurs. 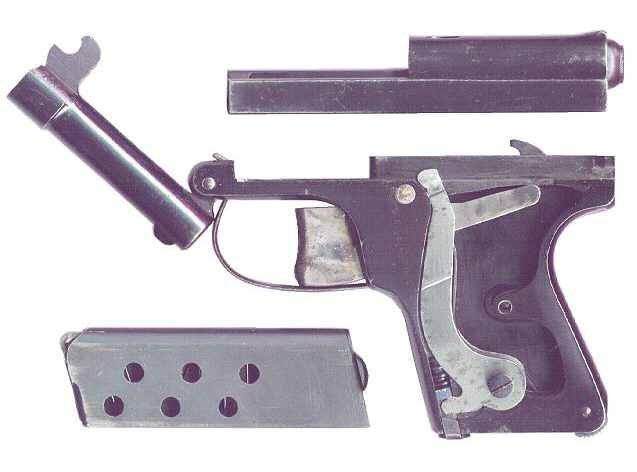 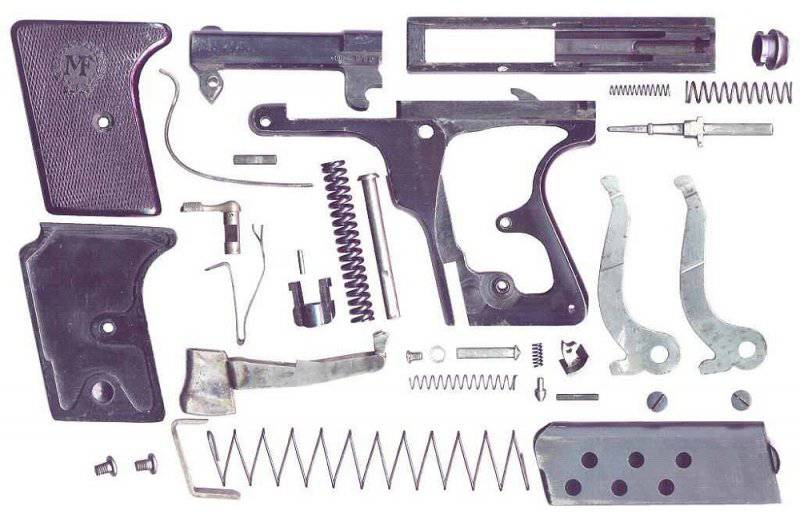 The return spring of the bolt is located in the vertical opening of the pistol grip in front of the magazine. The spring is connected to the corner levers located to the right and left under the cheeks of the handle. These levers provide the transfer of the impact spring to the valve 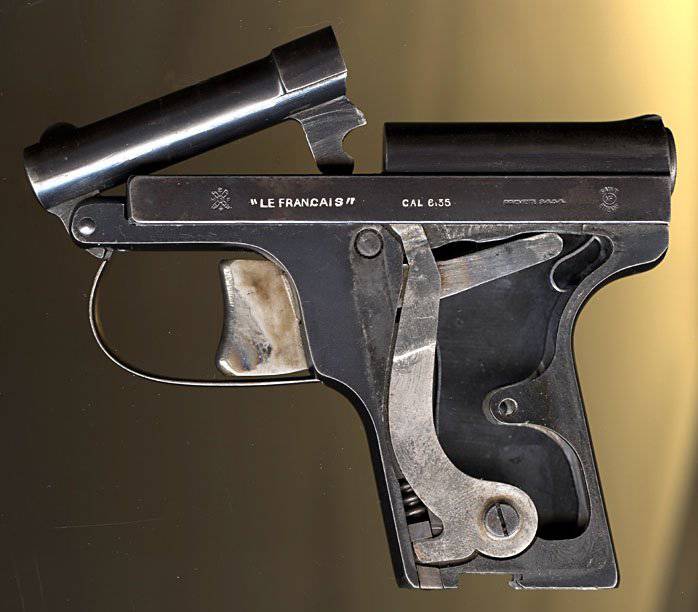 All Le Francais pistols are equipped with a folding (hinged) barrel. Its attachment is released when turning down the lever located on the right side of the weapon above the trigger. In this position of the lever, the barrel swings up at an angle of approximately 30 °. In 9 caliber mm pistols, the trigger guard acts as a swing spring. To put the weapon on alert, the shooter must manually insert the first cartridge into the chamber, and then set the barrel in place. 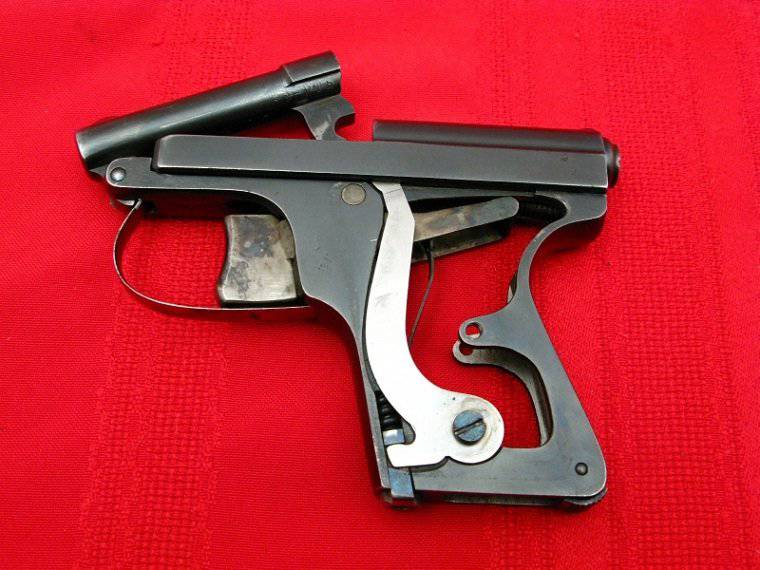 Store (equipped or empty) must be in the handle, otherwise it is impossible to close the barrel. Barrel locking stops as soon as the store is removed. If the barrel leans up on its own, the locking lever turns down and remains in this position until the magazine is re-inserted. 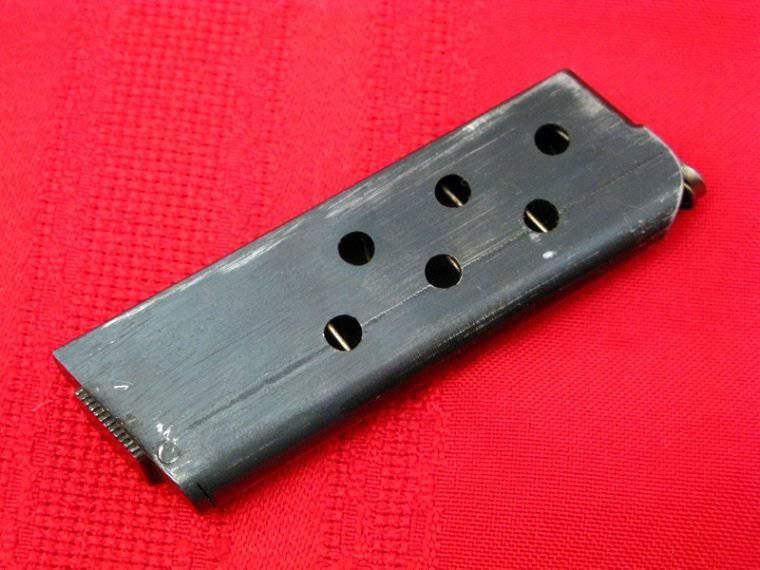 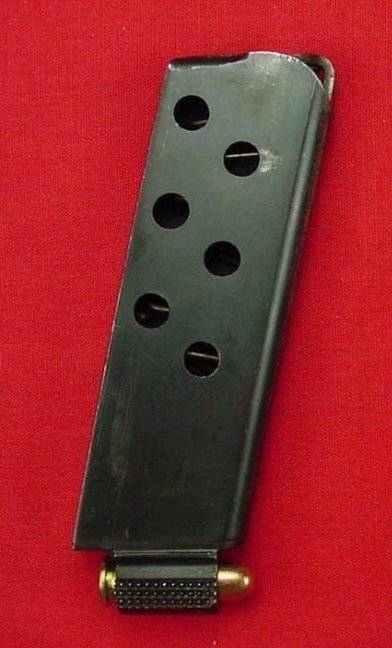 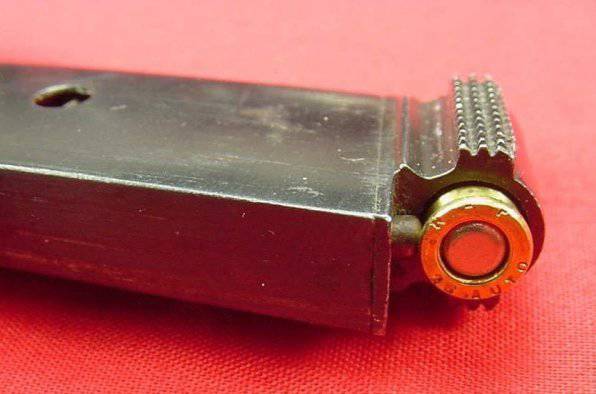 Features of the loading procedure, when it is necessary to have a cartridge at hand, prompted the designers in later models of pistols to place the cartridge outside in a special spring holder of the magazine. Pistols of the first parties did not have such stores. A shortened barrel weapon was also supplied with a conventional magazine. After making the first shot, the automatic pistol reloads itself. In this case, the drummer is not cocked. It takes effect only when the shooter releases the trigger forward and presses it again.
Despite the difficulty of loading, this design has several advantages. Since cocking is possible only when the trigger is activated, neither a fuse nor an uncoupler is needed. In this case, Le Francais pistols will be absolutely safe. The shot cannot be made involuntarily, even when the weapon is dropped or defused. Unlike other weapons, the shooter does not need to make sure that there is no cartridge in the barrel when discharging. As soon as he took out the magazine, the barrel leans back and the filed cartridge is thrown away. 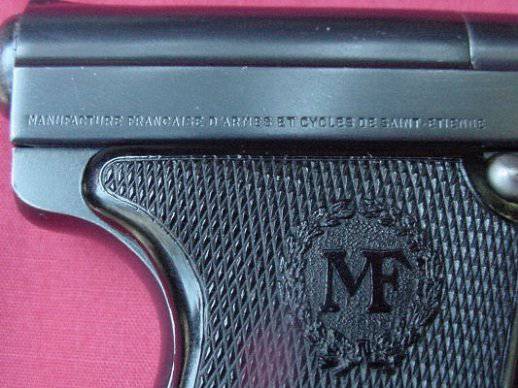 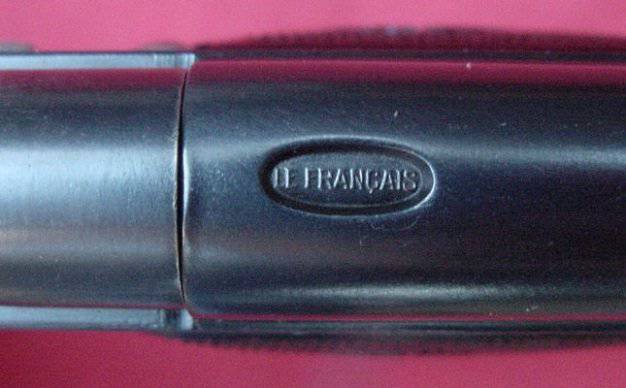 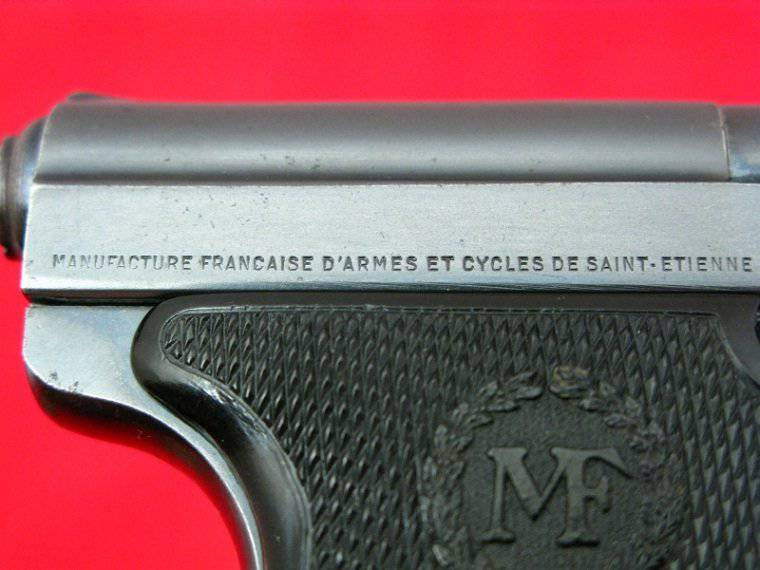 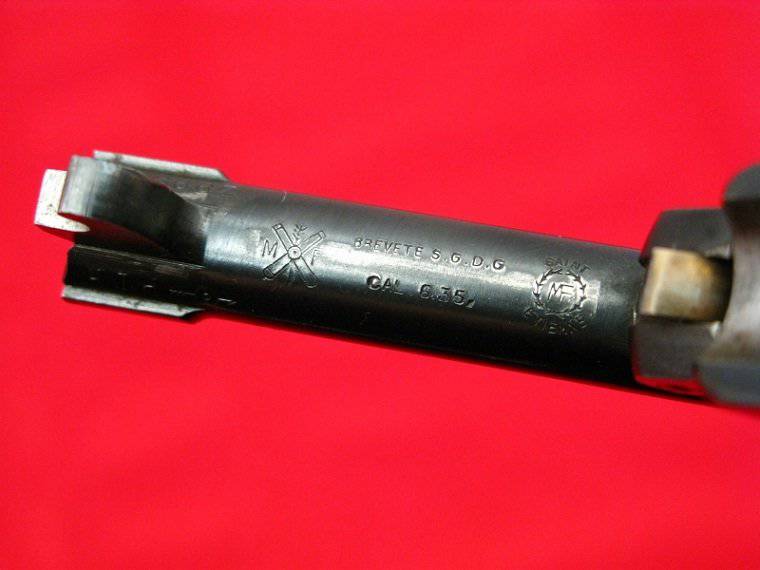 On the cheeks of the handle most often there is an abbreviation "MF", denoting the manufacturer. On the weapon of two versions of small caliber it can be found almost always. On the bolt, there was also a marking characteristic of weapons. The cheeks are made of black plastic and attached to the handle with screws. 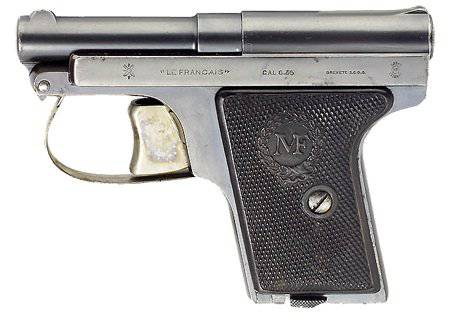 Some details, such as the shape of the handle, the latch of the store, etc. modernized, today there are several versions of this model of weapons. The early models of Le Francais pocketmodel were available in four types, from No. 1 to No. 4. Model number XXUMX were the easiest way to finish, model number XXUMX number XXUMX were made with an increasingly complex design. They were all blued. 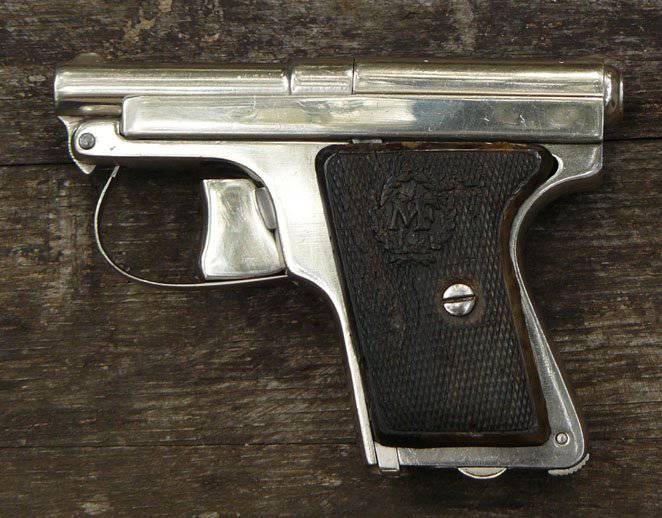 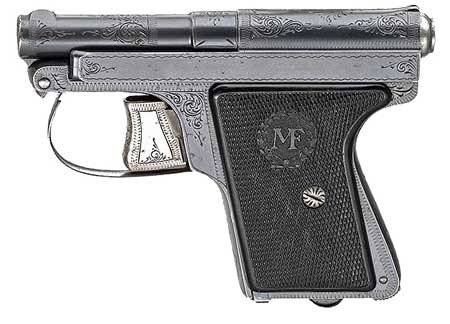 Later, with the advent of other models, each class received its model number: 802 - the standard model, 808 - with improved finish, polishing and minor engraving; 814 - nickel-plated, grips in a small "mesh"; The suites are brilliant blue-black in color, with luxurious engravings, 820, just like 814 with high-end decorations. In the following years, the 802 model is also offered in a nickel-plated finish. In 1939, an additional model (Mod? Le extra-l? Ger) with an aluminum alloy frame was introduced under the number 812. The barrel, barrel latch, trigger guard and magazine latch were made of chrome steel, the handles are decorated with mother of pearl. 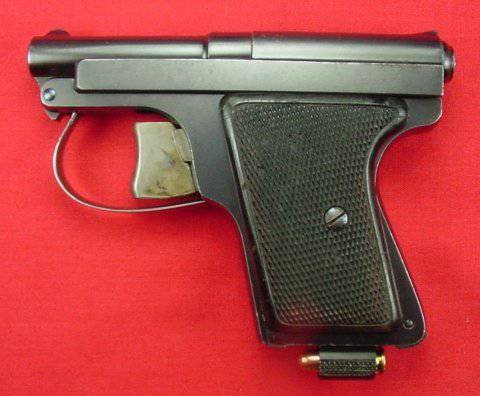 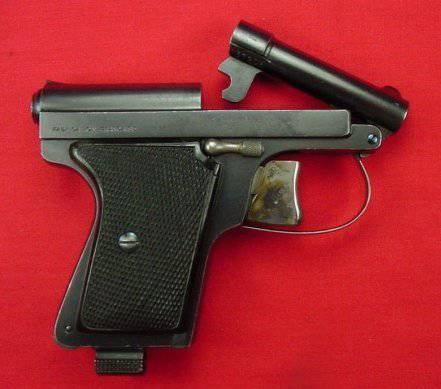 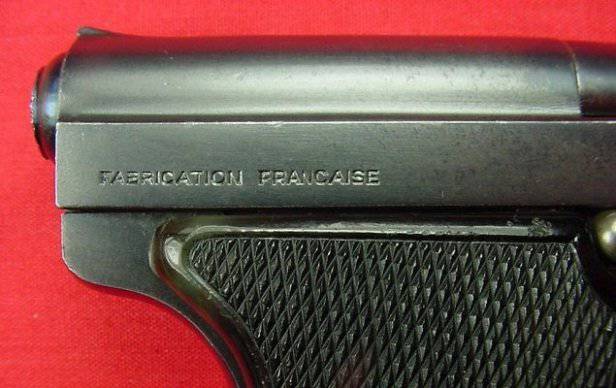 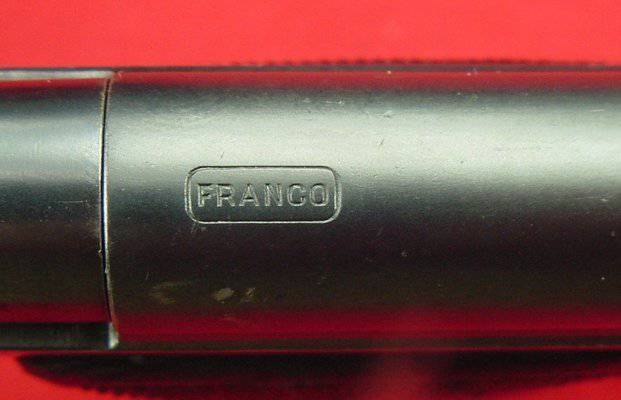 Pistols “Modele de Poche” were also sold under the name “Franco”, this weapon on the surface of the handle cheeks is marked “FRANCO”. 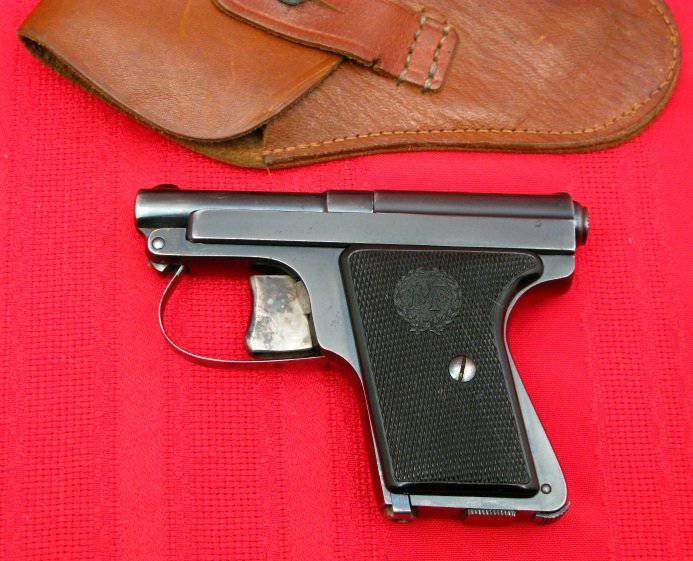 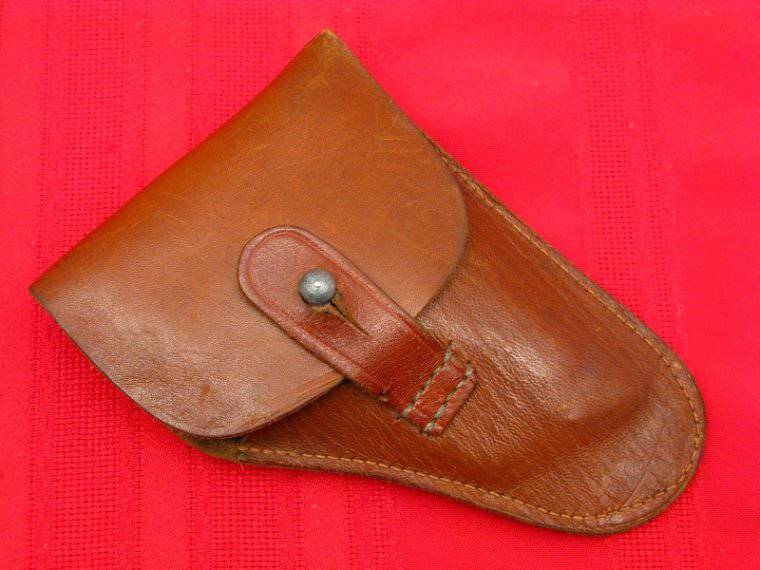 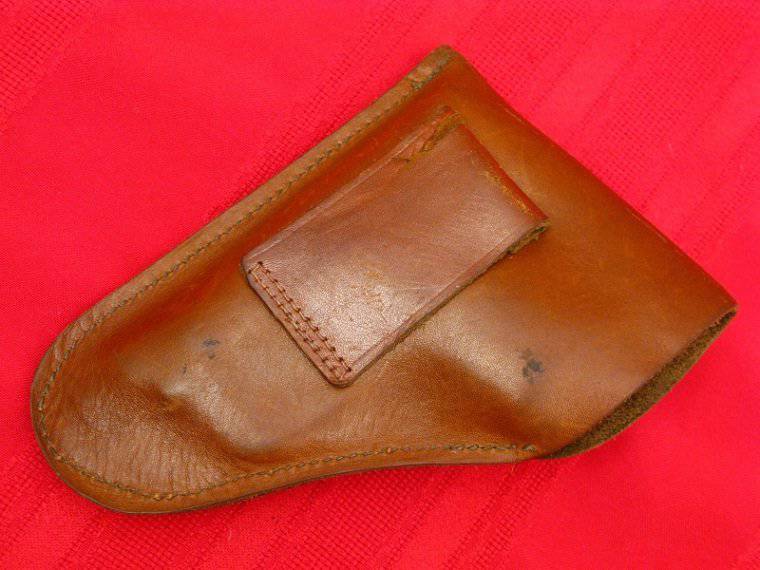