The reasons for the constant resistance of immigrants from Western Ukraine

March 15 2014
36
People see where the beginning of the madness of this Western people. This curse is already 300 years old and no one has yet lifted this curse from his followers! Hundreds of thousands of Slavs suffered because of this treachery. 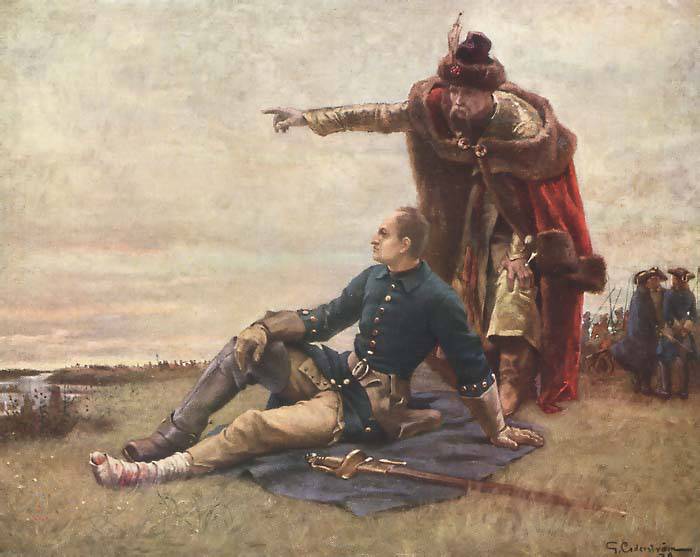 "A brief anathematization of Mazepa is the following:" Last year, 1708 in the month of Octovria of Little Russian cities, the former Getman Ivashka Mazepa, forgetting the fear of God, and rejecting the cross on God and great mercy of the Gosudarev, rejected Him for the Great Emperor ... And for such his God-worshiping, and His Great Emperor and the whole State is an indecent matter, His Graces Metropolitans and Archbishops and with the entire Sanctified Council, that enemy of the Cross of Christ, betrayed the curse and anathema forever, which he himself on his business, received from the soul-killer ”(Noli. mod. laws. T. IV, № 2213, pp. 431). In the Archangel ranks (both lists) there is such anathematization: “The new traitor named Ivashka Mazepa, the former Ukrainian Hetman, or more than the antichrists, the forerunner, a fierce wolf with a skin covered with skin, and a secret thief, a vessel of serpents, shiny with gold, honor and benevolence but any uncleanness, deceit, malice of the devil, cunning, untruth, enmity, hatred, torment, bloody and murder performed. Vipers offspring, Who aki serpent vselukavy poison your zlago intent on Orthodox state through a long time the authorities of his lurking, izbleva proshlago 1708 year in the month of Dekemvrii defying shred of goodness of God, and the extreme ineffable to his Sovereign's mercy and love, kovalerstvom prevysokim from him venerable. Broke faith and loyalty on the cross kissing the promised and approved. And aki the second Judas is a traitor having rejected Christ the Lord and the pious sovereigns of the Pious Sovereign of our tsar and great Prince Peter Aleksiyevich, all the great and small and bely Russia of the autocrat. And adhering (to the enemy of God and His saints, the accursed heretic) to the king of Sweden, Charles the Second, he imparted him to the Little Russia land of the Church.

In the Vologda and Pskov ranks, instead of the “Apostolic”, God and the place of the holy defiled and destroyed. And by his Swedish king, the assistant and supporter in the battle, and on his benefactor and Sovereign, threw up a robbery hand, although the Little Russian land like a pregordy Lyutsifer with his treacherous and plundering trunk, has been torn away from a pious and Great Russian power. But the Lord did not help him to force his devilish willfulness and evil to do it; for by the power of God, by courage and courage, our indispensable monarch: the pious sovereign of our tsar and grand duke Peter Alexievich of all the great and small and white of the autocrat; and His victorious army defeated the essence of the entire enemy regiment, under the city of Poltava, last year in 1709, the month of Iunia on 27 day, taco gloriously, as if the king of Svei and this traitor Mazepa himself was safe to the Port of Turks for protection. And a tamo damned for a few days of his malice, and living is finished, and although he rises up into heaven, and is like the highest, he is reduced to hell. However, the son of perdition for such a betrayal of apostasy from a pious power, betraying and bringing up the hands of robbers and battle against Christ, his benefactor and Sovereign, with all his companions, scapegoats and traitors, be cursed. ”

All who follow this path not far away from their progenitor. No one has the right to betray their homeland.