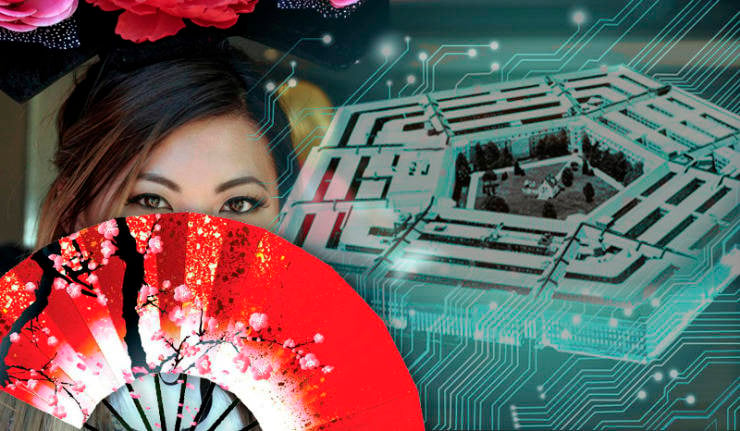 Young Chinese woman charmed retired US military. Two years of love affairs can cost a lover of oriental women 20 years in prison. Romantic dates turned his head in such a way that secrets about the US military plans, nuclear capabilities, the deployment of early warning systems and the shield from the DPRK's ballistic missiles leaked to China. The case is considered 13 March at regular hearings in the US Federal Court.


59-year-old Benjamin Bishop was taken into custody in March last year not in an intimate setting, but at the headquarters of the US Pacific Command in Honolulu. He had access there as a company officer in the provision of contract services to the Pentagon. His mistress was then 27 years old. Where is she now - the FBI is not known. At the same time, the American special services have no direct evidence that she worked for the government of the PRC.

In an intimate relationship, "sweet couple" consisted of two years. Prior to that, the Chinese woman came to the United States as an exchange student. Then the novel began. A Chinese woman, if she was just a student, could not but know how her contact with a very middle-aged man could end. If she came overseas to get married successfully, the retired military was clearly not her life partner. It is possible, therefore, that their love история was professionally directed.

The Pentagon’s internal security services have pierced very badly. The Chinese are bringing more and more headaches to special services in the USA, Oleg Demidov, an expert of the PIR Center on Cyber ​​Security, noted:

"Many members of the Chinese diaspora are interested in high-tech US corporations, cooperate with them. There are also representatives of the PRC who are just temporarily working in the USA. In many cases, for patriotic reasons or urgent requests from their homeland, they risk engaging in activities that qualify cyber espionage. The United States faces an increasing number of such cases in recent years. "

The loudest scandal is related to the recent case of Chinese electronics engineer Steve Liu. He worked in the American company - the leading contractor of the Pentagon. Received 6 years in prison for stealing drone technology that hit targets without communication with a satellite.

In 5 years in prison, Min Xuanzhang cost an attempt to take home several tons of hydrocarbon fiber. It is used in the US aircraft. The court did not believe the Chinese that the raw materials were intended for the manufacture of hockey sticks.

These cases received a great response in the United States. They provoked a new round of the campaign of charging China with secret information and theft of industrial technology. As a result, without citing any evidence at the end of 2013, China was accused of spying for China by the adviser to the director of national intelligence, Theodore Morgan. The accusation was built solely on the fact that he legally provided paid services to the Chinese telecommunications giant Huawei, who had previously been blacklisted by the US special services.

This is pure witch-hunt in the 21st century, said Andrei Ostrovsky, Deputy Director of the Institute of the Far East of the Russian Academy of Sciences. The witch-hunt began in the United States in the middle of the last century and turned into defamation of all those who were under suspicion of having links with communist countries:
"This is a continuation of the witch hunt" and the attitude towards China as a whole. The US is opposed to China, which means "whoever is not with us is against us." And as a result, such consequences. Meanwhile, the situation is ambiguous. On the one hand, the policy "On the other hand, the economy. China is a country with a booming economy. And many American firms benefit from trade with China, and do not share the point of view that China is spying on all of them."

In November, 2013 of the year, under the spy campaign in the United States, Chinese scientists fell. Because of their fear of theft of secrets, they were not allowed to the Kepler international conference. The theme of the forum was the study of planets located several thousand light years from Earth. Another spy scandal looked equally ridiculous: the US Federal Court decided that Chinese wind power stations that were going to be installed near the naval base in Arizona could threaten national security.

A wave of espionage scandals in the United States - both real and groundless - will intensify as China tries to narrow its gap with the United States in civilian technology and the military. And in China itself, we can expect a new surge of spyware revelations - Beijing, most likely, will try to respond symmetrically to Washington.