The illusion of Europe 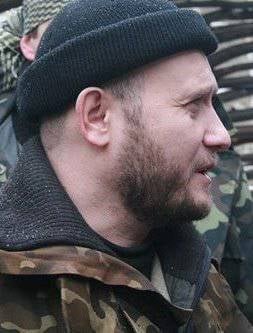 
Every revolution, no matter where it takes place, be it the narrow streets of 19 in Paris, the stone paving of Palace Square or the endless expanses of Latin America during the wars of independence, is inevitably designed to spawn its heroes. People who will later be remembered as those without whom this revolution would not have been possible in principle, those who became its inseparable symbol. And modern “revolutionaries” of all stripes often understand this all too well.

Dmitry Yarosh - one of the most controversial figures in modern Ukrainian politics. And, without a doubt, one of those with whom a coup in Ukraine will be associated several years later.

Dmitry Yarosh, the first deputy head of the central wire of the nationalistic organization “Trezub”, is in fact the leader of the whole “Right Sector”, which includes a number of nationalist organizations. He did not hesitate to take responsibility for the coup in Ukraine: for sure, the dream of a revolution was the dream of his whole life.

Infrequently, a person has the opportunity to fulfill a dream. And not every person is able at such moments to think about how his "great" actions will affect ordinary people. This is exactly the difference between an elected or appointed politician who is responsible for his actions to the people, and can be removed in case of an undesirable outcome of such actions, and a radical populist who is not responsible for anyone’s actions . Yarosh now cannot be held accountable even by the law enforcement agencies of his country - the ultra right wing now has such a strong influence.

If you look at the events in Kiev that have taken place over the past month, Germany 30-s comes to mind, youths marching through the streets in military style, nationalist slogans in the Ukraine-for Ukrainians style, putting the responsibility for problems in the country on an external enemy. Even the symbolism of the "Right Front" and that brings involuntary associations with German Nazism.

The image of an external enemy in general has always been very important for the Nazi movements of all times and peoples. It is necessary to turn popular discontent on someone when your political program does not go further to overthrow the government and "restore order in the country." Ukraine is still at this stage - in the name of the revolution, right-wing militants rush into meetings of local authorities, demand that the deputies of the Party of Regions surrender their mandates, promise to hang them on their feet at the gates of the Minister of the Interior, who dared to criticize them.

Yarosh, who previously proclaimed himself out of politics, now wants to be president of the country.

And the image of an external enemy, meanwhile, has already taken shape quite clearly. Not just as the soldiers, who are recruited by the Right Sector right on the streets, are chanting in the open in their marches: “Moskal - for knives”.

And this fact is not accidental. From the very beginning of his “career” in nationalist movements, Yarosh set himself the main goal of precisely fighting with Russia. The very possibility of economic cooperation with Russia causes him nervous convulsions from the stands of Maidan.

Yarosh considers Russia the eternal enemy of Ukraine and is convinced of the inevitability of war between the two countries, calls Russia an “imperial monster,” considers it necessary to completely liquidate Russia and “build national state entities on its territory”, expresses confidence in the possibility of victory over “satanic Moscow” and “ the destruction of the Empire.

And in the fight against this enemy, he is ready to adhere to the well-known principle of Machiavelli - the goal for him justifies the means. And it is precisely the means of Russia's confrontation that is supported by Yarosh for the association with the EU, and that the Right Sector suffers the acceptance by the current government of Ukraine of assistance from Europe and the USA. At the same time, for the sake of this goal, Yarosh is ready to call for help the leader of the Chechen terrorists and (who knows what is in his head?), Perhaps, who is worse.

And again, no one can know for sure how the situation in Ukraine will end, which is almost split by the national issue, but already now leaflets with inscriptions “Moskal lives here” began to appear on the doors of the Russian population, which automatically became the enemies of the Right Sector. . Why enemies? So after all, according to the methodology of Bandera, which Yarosh confesses, after all the demonstrations it cannot be otherwise - after all, the Russians deny "the right of the Ukrainian nation to be masters of their destiny on their land."

And Russia, trying to ensure the safety of the population of the Crimea, gave Yarosh direction where to strive. And let the Crimea - this is not the Ruhr 30's, the essence is the same.

And if we add to this the popularity that the Right Sector gained by supporting Europrotest, who knows who can come to power in the upcoming presidential elections in Ukraine? And what actions can follow from a person with supreme power in a country for whom “only weapononly the struggle "became the meaning of life? Let this person (irony stories) - just an corporal.

And what kind of Ukraine will Europe get then? 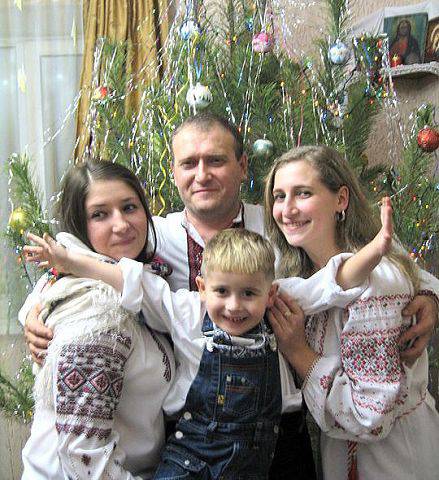 Subtleties of neo-Nazi propaganda: on the Pro-Bandere sites, Yarosh is the loving father of children in the New Year ... 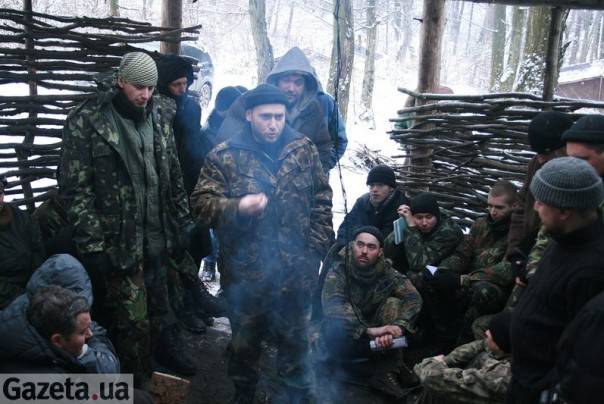 ... And here Yarosh explains to extremists how to seize power

Ctrl Enter
Noticed oshЫbku Highlight text and press. Ctrl + Enter
We are
Strategy and tactics of the "Right Sector"Profit and Parisian streets since the Nazi occupation
Military Reviewin Yandex News
Military Reviewin Google News
116 comments
Information
Dear reader, to leave comments on the publication, you must sign in.