March 15 2014
41
As is known, in February of this year, a major scandal erupted in Turkey. Records of the conversations attributed to Prime Minister R. T. Erdogan and his son were in the network. The last entry spread on the Internet is February 27. As expected, the Prime Minister of Turkey talked on the phone with his son Bilyal. Someone Haramzadeler, an anonymist specializing in tweets and YouTube about government corruption, posted a file on the network. 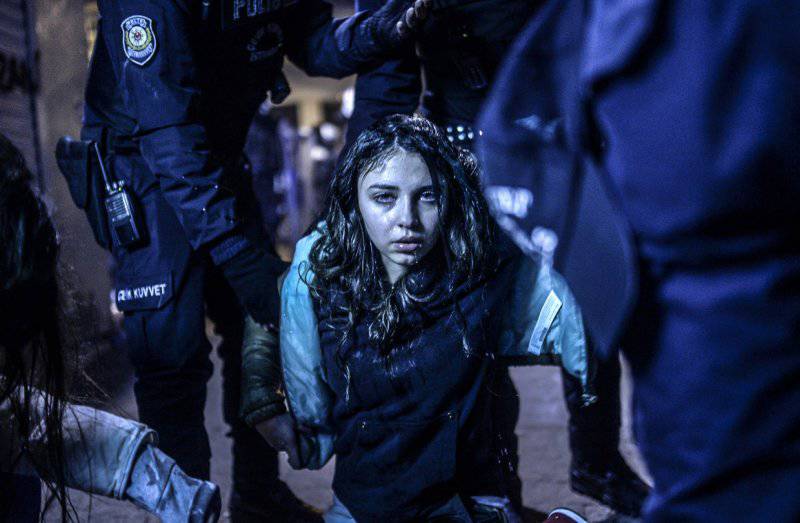 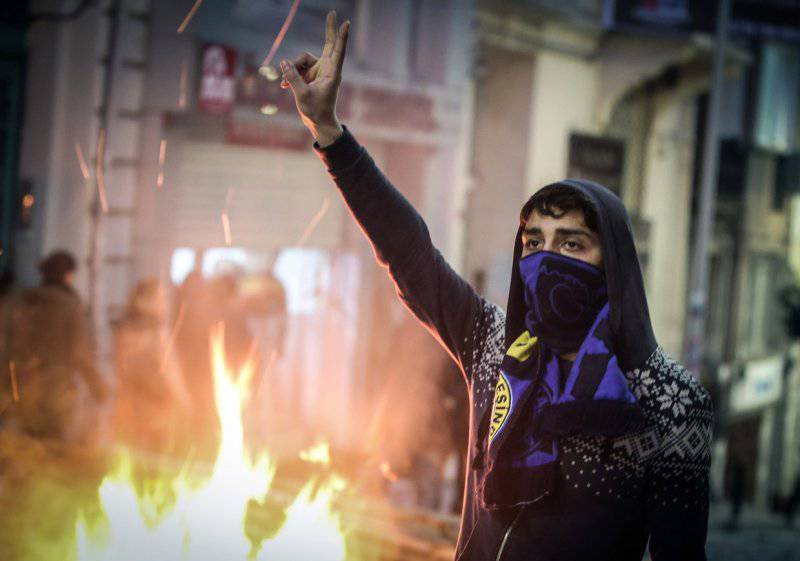 According to the media, the conversation was about taking a bribe from Sytka Ayan. This businessman, who undertook to build a new oil pipeline from Iran, the Turkish Cabinet graciously, but was disinterestedly willing to exempt from taxes. For such a large indulgence, the businessman was ready to hand ten million dollars to the rulers. But R.T. Erdogan (or as if he) told his son that the amount is too small and it is necessary to demand more. Conversation recording has not been refuted.

The announcement in February of the previous recording (a conversation dated December 2013), also concerning corruption, caused the prime minister's anger. He announced a "montage" of attempting to attack himself - "the Prime Minister of the Republic of Turkey". The publication of that record coincided with the “Big Bribe” anti-corruption police operation in Turkey, during which children of ministers were arrested. The Prime Minister himself added fuel to the flames of the scandal: he dismissed the high-ranking police officers who initiated and carried out the operation.

In the December conversation, Erdogan allegedly asks his son to take millions of euros out of the house. This record was made by Turkish police. Her employees were engaged in tapping for three years - they, on the hook, had, in addition to Erdogan, the president and the head of national intelligence. "First channel" quoted the dialogue of the Turkish Prime Minister and his son Bilal: “They are conducting an operation. 18 man under arrest. I want you to take everything out of the house. Is that clear? ”Then Bilal said:“ We have almost done everything. It remains to resolve the issue with 30 millions of euros. They can not yet be dissolved. Another 25 million dollars has not yet received Ahmet Chalyk. For the rest we can buy an apartment. What do you say? Do you want all the money to disappear, or can you leave something to yourself? ”R.T. Erdogan, in response, says:“ No! It's impossible. Need to get rid of everything! ” 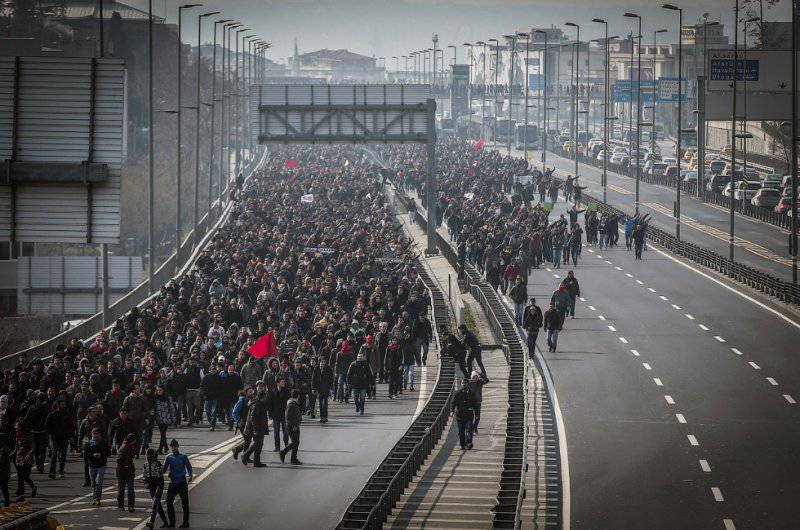 People go to the funeral of a teenager who fell victim to the summer protests in Istanbul and who died after a coma after 9 months. A lot of people. Istanbul, Turkey, 12 March 2014. (Photo AP Photo | Emrah Gurel) 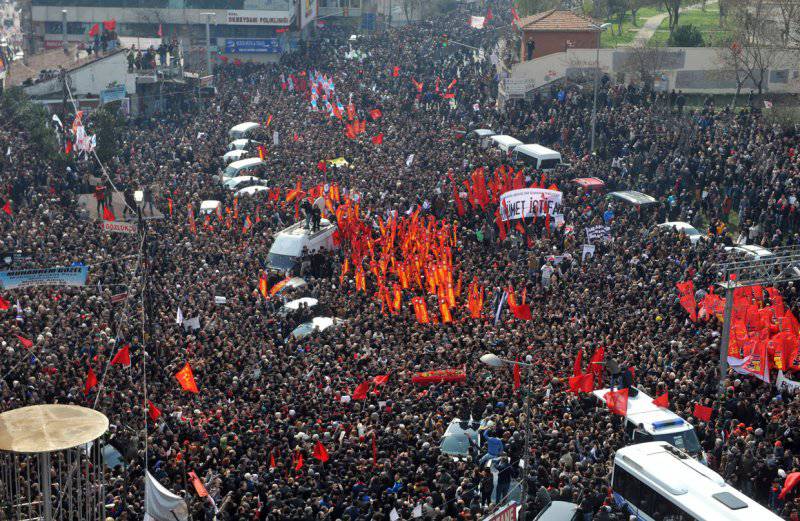 In Turkey, the riots began. They continue to this day and are also connected with the upcoming elections. Erdogan responds to them in his easily predictable manner.

He accused anti-government protesters of rioting in order to influence the course of local elections that will be held on March 30. According to Erdogan, the demonstrators are charlatans who have nothing to do with democracy. "Euronews" quotes Erdogan's speech, delivered to those in Ankara, at the opening ceremony of the new metro line: “They say, let's create chaos and, perhaps, then we will get the result. But they cannot get any result. My brothers in Ankara and throughout Turkey will give the right answer to 30 of March. ”

Anti-government demonstrations took place in many cities in Turkey; The police used traditional methods to disperse them: tear gas and water cannons. Two people died: a policeman (died of a heart attack) and an 22-year-old guy who was shot by an unknown person.

This latest wave of protests in Turkey rose, including due to the death of a teenager: 15-year-old Berkin Elvan, wounded during protests in Istanbul last summer (the guy just went to the store for bread and got a bullet in the head), died a few days later long stay in coma.

By the way, earlier the media quoted Erdogan’s statement that he would leave politics if the Justice and Development Party did not win the elections: “I declare directly and openly: if my party is not the first in these elections, I’m ready to leave politics.”

Apparently, will have to leave. Erdogan loses rating. He is not supported in Turkish cities, which boil with anger of protest for several reasons: the corruption scandal described above; former court cases against the military and a number of public figures; power methods of dispersing demonstrators; the death of the said teenager, which caused mass protests in Ankara, Istanbul, Izmir, Antalya and other cities. The demonstrators called Erdogan a "murderer." Moreover, the latest protests are supported by the Turkish diaspora in Western Europe (Paris, Berlin, Cologne, Brussels) and in the USA (New York). This time Erdogan said nothing to the crowd: there is nothing for him to say. 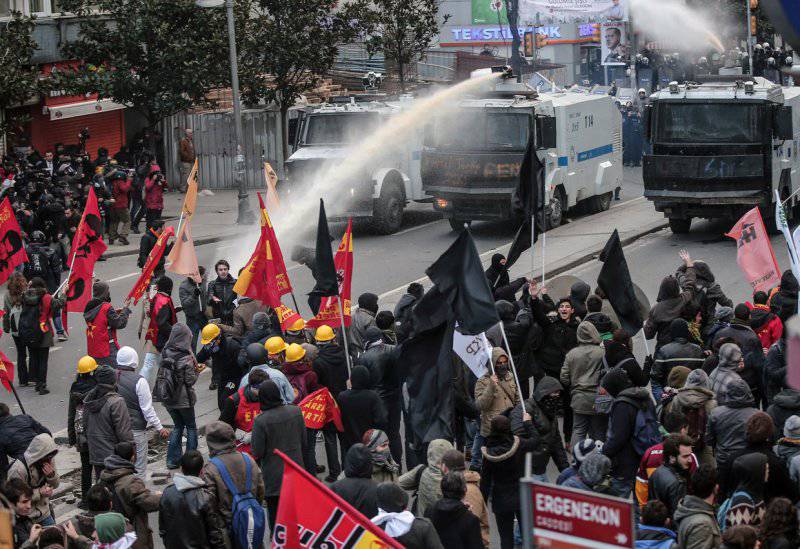 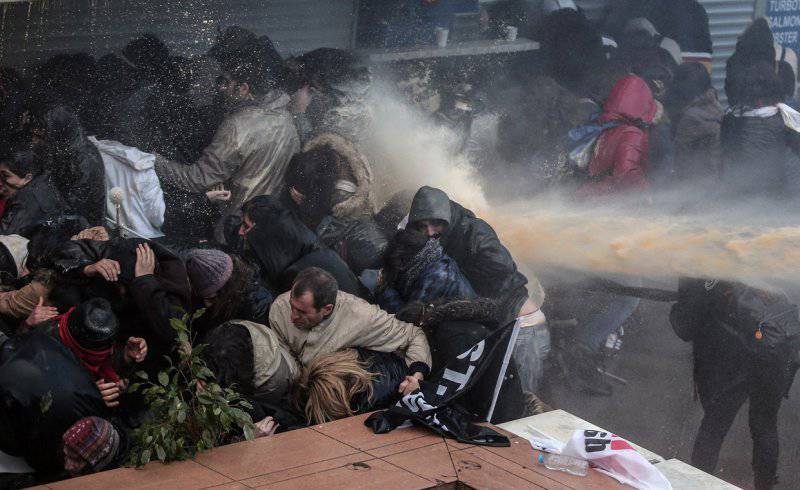 The scandal has reached the European Parliament. Recently, there was reviewed and adopted a report on Turkey on non-observance of the principle of freedom of speech and the principle of separation of powers in this country. MEPs accused the Erdogan government of ineffective investigation of a corruption scandal.

What astonishing people are these MEPs! How can a prime minister encourage an “effective” corruption investigation in a case involving himself?

As for the fall of confidence in Erdogan in Turkish society due to court cases against the military and a number of public figures (the Ergenekon case), the prime minister took some measures before the elections. 10 March Thirteen were sentenced from prison, and earlier, 7 March, the authorities released the former Chief of General Staff Ilker Basbug, who was given a life sentence, accusing a high-ranking military man in preparing a coup d'état. In total in mass media write about the justification of 21 of the person.

However, having freed several people, Erdogan is tightening the screws on the other hand, which the city residents do not like very much. As transmits "BBC", the Turkish Prime Minister threatened to ban Facebook and YouTube in the country because the opposition uses social networks to attack the government, including the prime minister. “We will not leave our people at the mercy of YouTube and Facebook,” Erdogan said in an interview with Turkish television channel ATV. “We will take the necessary, serious measures.” On the question of whether these measures include banning sites, he answered unequivocally: “Include”. "BBC" reminds that it was on "YouTube" previously appeared a record of a telephone conversation in which Erdogan and his son discuss how to get rid of millions. The prime minister called the audio recording a montage, but did not deny that the voice on the recording belonged to him. 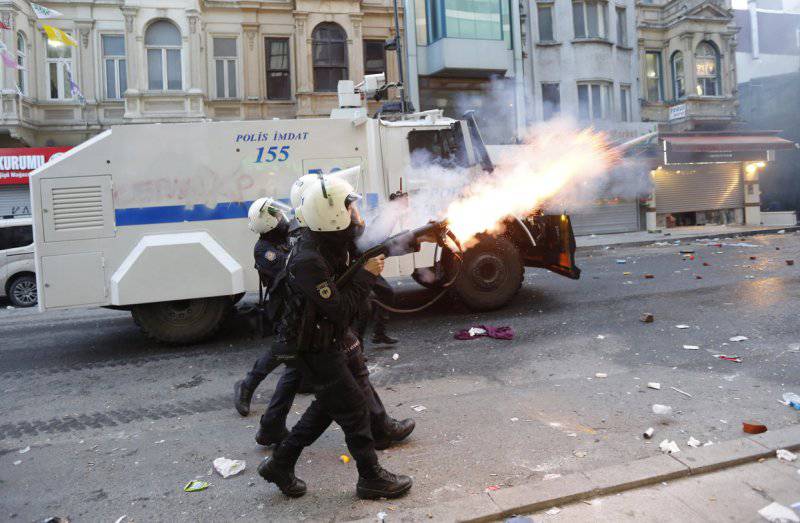 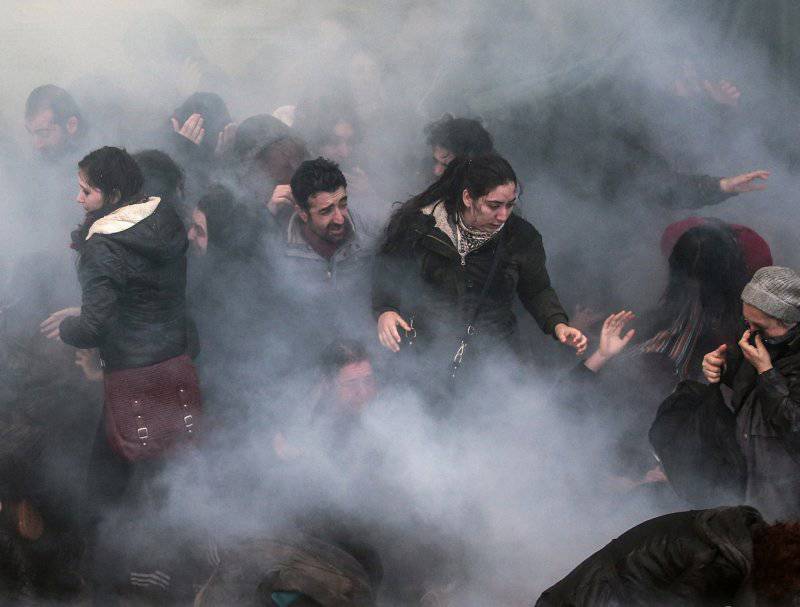 The BBC correspondent also recalls that last month the Turkish parliament passed a law allowing the authorities to block websites without a prior court decision. The new law has provoked violent protests in Istanbul. Of course, they were dispersed by the police: batons, water cannons ...

The results of all this authoritarian activity of R. T. Erdogan and the corruption scandal: the Prime Minister lost his popularity not only among the Turkish urban population, but also in his own party. Many of its members no longer trust Erdogan.

“In any case, Turkey will have a very difficult year, perhaps the most difficult year in its entirety. history last decades. Let's hope that Turkish politicians will show wisdom and will not plunge the country into the abyss of bloody civil confrontation like their colleagues from neighboring Arab and post-Soviet countries. The country needs national reconciliation, the first step towards which, in our opinion, must be taken by the Turkish leadership itself. This reconciliation must begin with the public repentance of the leaders for the obvious crimes committed, the voluntary extradition of suspects and the organization of an open trial against them. <...> RT Erdogan ... needs to accomplish the impossible for man, but possible with the help of God - to abandon the ambitions of the caliph and the autocratic sultan and at least for a short while become a humble dervish. Distribute gold to the poor, forgive everyone and invite them as equals for a conciliatory dastarkhan. In the great history of the Ottoman Empire, which is so revered by the believers of the Turks, there were many such examples. … Dzhelyaluddin Rumi twice in his life renounced earthly goods and completely cast his fate into the hands of Almighty Allah. That is why he became the very Rumi, and not the unknown rich and successful rector of the madrasah of the medieval state that had left us forever. The prime minister needs to take this step at least once. "

However, judging by how R.T. Erdogan authoritatively behaves, he is no longer in a position to refuse the "ambitions of the Caliph and the autocratic sultan". I'm used to ... 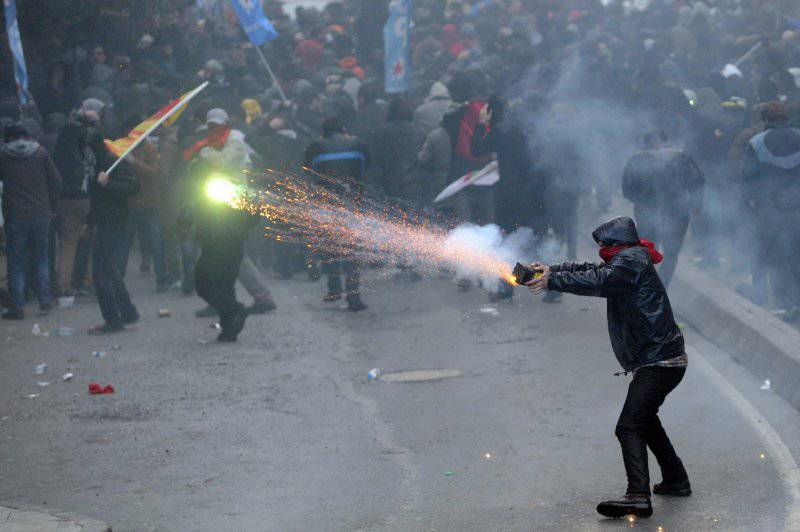 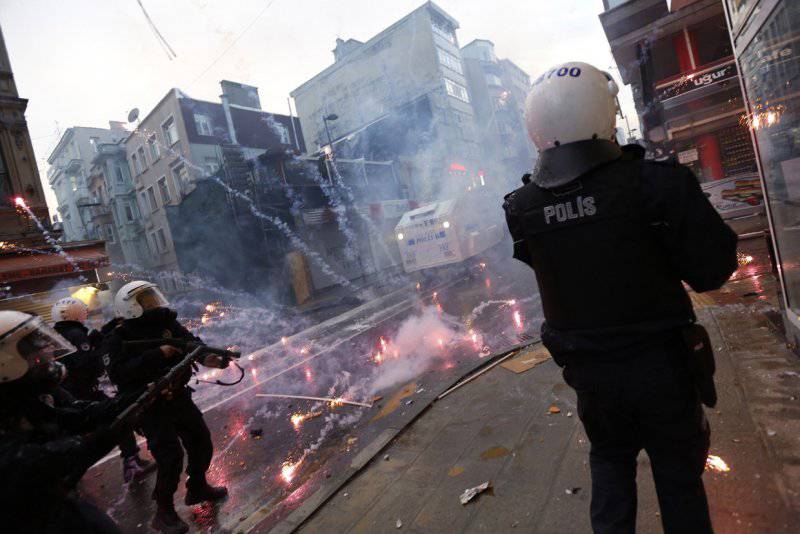 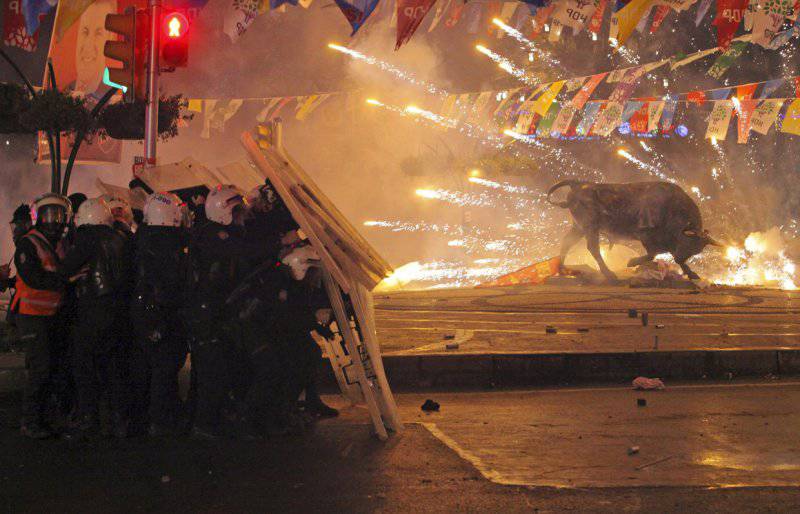 Shooting at the guardians of the order by fireworks, Istanbul 12 March 2014. (Photo by Ozan Kose | AFP | Getty Images) 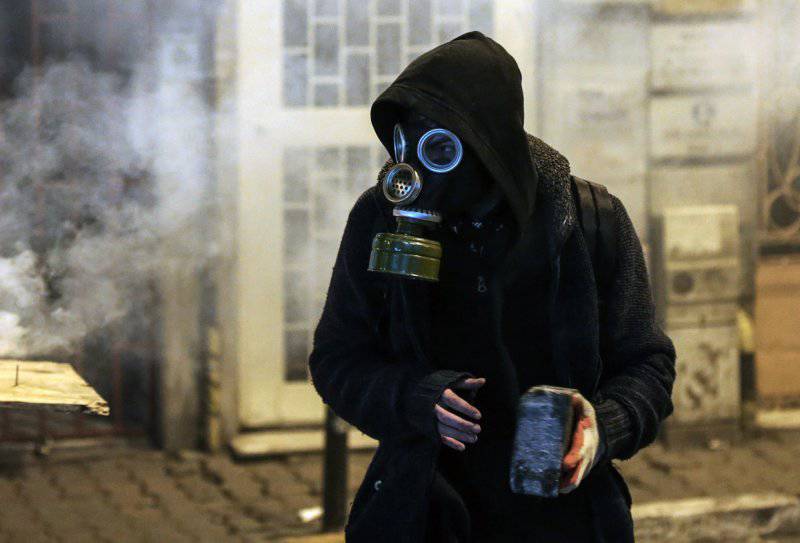 A familiar subject is a cobblestone, so beloved by nationalist fighters from Maidan. (Photo AP Photo | Emrah Gurel)

Ctrl Enter
Noticed oshЫbku Highlight text and press. Ctrl + Enter
We are
Results of the week "I do not need a Turkish coast"Geopolitical mosaic: the Stop Censorship movement advocates censorship, Naryshkin explained that Russia supports the territorial integrity of Ukraine, and the world community disgraces before the UN
Military Reviewin Yandex News
Military Reviewin Google News
41 comment
Information
Dear reader, to leave comments on the publication, you must sign in.