March 14 2014
23
In the 1980s, the armies of the countries of the NATO bloc underwent a review of how to use small arms weapons army units belonging to the "second echelon". The consequence of this was the emergence of the concept of PDW - Personal Defense Weapon, translated into Russian, "individual defense weapon." The PDW concept envisaged the development of small-sized small-arms automatic weapons, which planned to arm the calculations of artillery guns and anti-aircraft rocket launchers, car drivers, crews of combat vehicles, etc. That is, those military personnel for whom small arms are not the main ones and are used only as a means of self-defense.


In the USSR, the development of self-defense weapons was also given attention, but special programs like PDW were never announced here. In addition, for these purposes, at the time, the APS, the Stechkin automatic pistol, was well suited. And at the end of the 70-ies the AKS-74U machine gun was adopted. It was used for the same purposes as foreign counterparts, but because of its significant weight and size characteristics, it did not pull on the real PDW.

A breakthrough in the development of such weapons in Russia came only in the second half of the 1990-s. It was accompanied by the development of a new Russian pistol cartridge 9х21 mm at TsNIItochmash, which was distinguished by high slaughter and penetrating action. At the same time, an increase in the damaging capabilities of the bullet was achieved not only by increasing the initial speed of its flight, but also by the special design of the cartridge. The new cartridge 9x21 mm, according to developers, had to completely replace the standard cartridge 9x18 mm to the Makarov pistol (PM). Especially for the new cartridge, the specialists of TsNIItochmash designed the CP-1 pistol (the unofficial name “Gurza”). 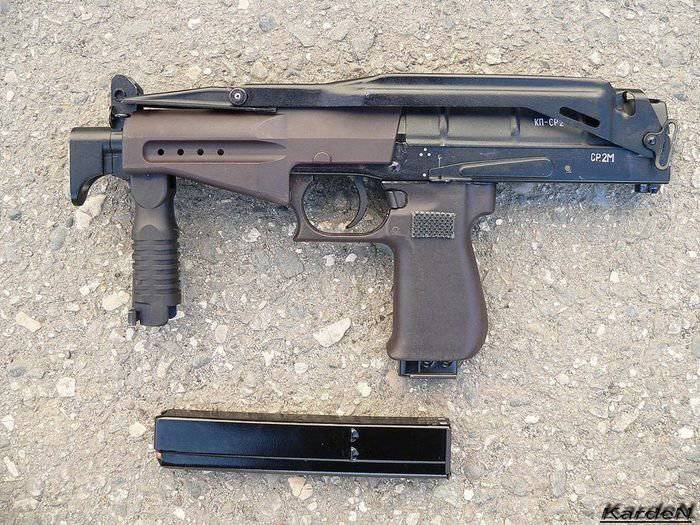 The success achieved while creating a pistol for a new cartridge allowed the specialists from Klimovsk to start work on another promising model, which later received the designation CP-2 “Heather” submachine gun. The development of the submachine gun was completed in 1999 year. At present, Veresk is in service with the FSO of Russia, the FSB (detachment of the Vympel), as well as a number of special units of the Ministry of Internal Affairs of Russia (for example, in the Moscow riot police).

Naturally, while working on a new automatic weapon for a completely new cartridge, the designers of the company analyzed and reviewed several different automation schemes. The use of a powerful patron required uncommon decisions from them. They chose a comparatively rare automation system for this type of weapon, which provided for the removal of some of the powder gases from the barrel bore, and the barrel was locked by turning the bolt. Due to the lack of funding for the creation of a submachine gun was delayed, the first prototypes were ready only in the middle of 1998 year.

It should be noted that initially "Heather" was developed to solve a wide range of tasks. Among them - the defeat of enemy personnel in personal protective equipment of the 2 class at a distance of up to 200 meters, as well as unarmored vehicles at a distance of up to 100 meters. For this purpose it was planned to use several types of different 9x21 cartridges with different bullets: SP10 (increased armor penetration with a bullet with a special steel core); SP11 (with a malorekoshiruyusha bullet, having a lead core). SP12 (expansive bullet with increased stopping power); SP13 (tracer bullet). According to weapons experts, the damaging effect of the SP-11 and SP-13 cartridges was 1,5-2 times higher than that of the cartridges of the widely used PM. The use of an armor piercing bullet allows you to punch an 100-mm steel sheet with a 4% guarantee at a distance of up to 70 meters. 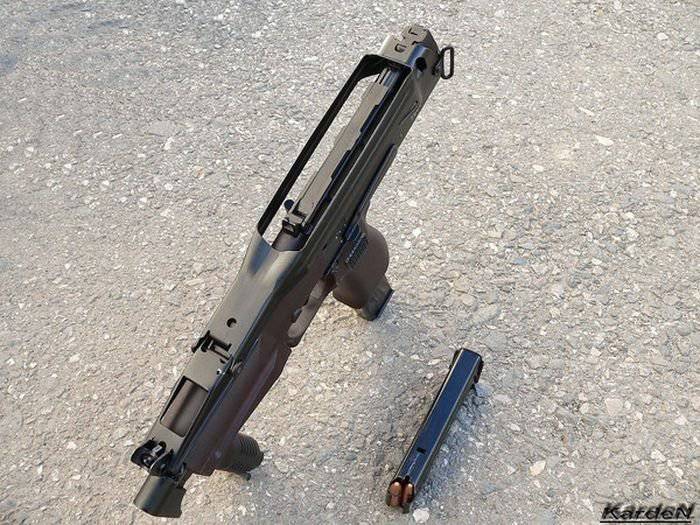 Submachine gun "Heather" significantly expands the tactical capabilities of the gun "Gyurza." At one time, the SP-10 armor-piercing cartridge, the SP-11А ordinary cartridge, the Gyurza pistol and the Heather submachine gun, as well as the collimator scope that was unique for them, were presented to the TsNIItochmash as a special shooting complex of increased efficiency, mainly intended for employees of special services . Accuracy of defeat, power and ammunition of software "Heather" are sufficient in order to achieve a qualitative advantage over the enemy. When using this complex, a preemptive effect is also achieved with a possible fire duel. The use of collimator sights provides a fairly high aiming speed - in 2-3 times faster than using traditional "muscular" sights.

The submachine gun "Heather" operates on the basis of vapor-automatic and has a long working stroke of the gas piston. At the same time, the gas piston placed above the barrel is rigidly connected to the bolt carrier. The piston is hollow; a return spring is placed inside the piston by the front part. The barrel is locked by cutouts located in the receiver, by turning the bolt with the 6 lugs. At the time of the shot, the gas piston and bolt carrier retract, turning the bolt. After that, the barrel of the submachine gun is unlocked and the shot cartridge case is ejected, then the bolt is sent to the chamber of the next cartridge and the barrel bore is locked. In this case, the automation system with rigid locking of the barrel in modern pistol-machine guns is very rare. This decision was due to the use of a powerful cartridge. Cocking handle rigidly attached to the bolt on the right.

In front of the forearm CP-2 "Heather" is a hold handle. The submachine gun uses a trigger-type firing mechanism that allows firing both in bursts and single shots. The safety lever is located on the receiver on the right and has two positions that are marked with the letters “P” - fuse and “O” - fire. The lever of translation of types of fire is located on the left side. Like the fuse, it also has 2 positions, which are marked with one and three points - single and automatic fire, respectively. The submachine gun is equipped with a folding metal butt that folds to the top in the stowed position. 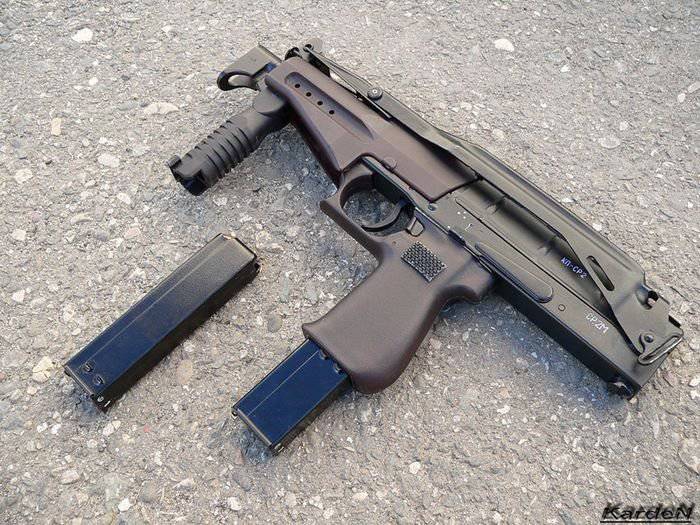 Butt "Heather" has a spring-loaded butt pad, which reduces the time of transfer of weapons from the marching to the combat position for firing with an emphasis on the shoulder. The method of placing the stock in the folded state reduces the lateral dimensions of the weapon. Together with the machine gun "Heather" can be used detachable box magazine on 20 or 30 cartridges. The location of cartridges in the shops - chess. Box magazines are installed in the pistol grip fire control.

The sighting device CP-2 consists of a front sight and a two-position rotary rear sight, which can be set to 100 and 200 meters. The sight sight is placed in a high rack, it can be moved in the vertical and horizontal plane to bring the submachine gun to normal combat. Also on the top of the receiver is a bracket that can be used to install a collimator sight. Its use greatly facilitates the process of pointing weapons at a target, especially in low light and when shooting at moving targets.

In the muzzle of the barrel of a submachine gun there is a compensator, on top of this compensator there is an inclined propyl. The use of such a compensator allows you to effectively fire, even if the shooter holds "Heather" "in a pistol-like way" (with one or both hands). The small weight and size characteristics of the CP-2M, combined with the axillary suspension of the original form, provide a quick transfer of weapons to the combat position, as well as convenient transportation. Also, "Heather" can be carried on a belt that is mounted on the front and rear flap. 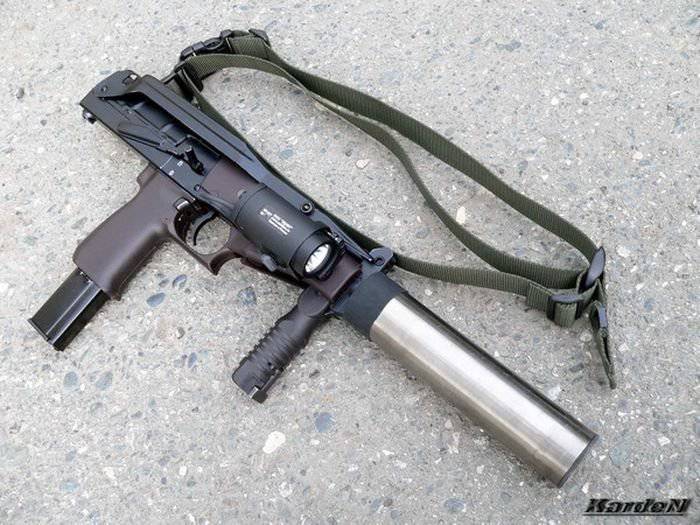 The main advantage of CP-2 "Heather" is very high firepower, high accuracy of shooting and high striking effect of a bullet at close range combat. The combination of these qualities made this submachine gun a very attractive model for employees of Russian special forces as a weapon of self-defense. "Heather" meets all the requirements that apply to weapons of class PDW in the West.

The first serial submachine guns CP-2 were distinguished by low quality, non-interchangeable shops, general “dampness” of the structure, as well as permanent minor malfunctions. All this caused a large number of complaints from users of submachine guns, who at the same time noted the overall prospects of development when bringing it to the required level of reliability.

Currently, CP-2 is not released. TsNIItochmash produces CP-2M and CP-2MP versions. The upgraded CP-2M model has a number of differences from the original model: instead of a firm focus on the forearm, a folding front handle appeared, which improves the accuracy of fire and the weapon's controllability (when folded, the handle becomes part of the forearm); instead of the muzzle brake-compensator, a muzzle-stop is used, which protects the hand of the arrow from moving forward and possible powder burns; fuse box has been slightly changed. The CP-2MP version is distinguished by the Picatinny slats installed, which are mounted on the shank and receiver. In addition, this version can be installed butt modified form and silencer.