Combat awards of the Russian Federation. Order of Courage

March 14 2014
6
2 March 1994 in the Russian Federation on the basis of a presidential decree was approved by the new state award - the Order of Courage. The Order of Courage can be awarded to citizens of Russia for courage, dedication and courage, which were shown in the protection of public order, in the fight against crime, saving people during natural disasters, catastrophes, fires and other extraordinary circumstances, as well as for decisive and courageous actions in performance of military, official or civil duty, which were risky for life.


In this case, the order can be awarded not only citizens of the Russian Federation, but also foreigners. Foreign citizens are awarded this order for their courage, dedication and courage in rescuing Russian citizens during fires, catastrophes, natural disasters and other extraordinary circumstances occurring outside of Russia. Awarding the Order of Courage can be made posthumously.

The Order of Courage may be awarded more than once. Today, there are three people in our country - Colonel Andrei Volovikov (military pilot), Colonel Sergey Militsky (Directorate "A" (Alpha) of the FSB of Russia) and Colonel Alexey Novgorodov (the police) who are holders of 4 Orders of Courage. In 2011, an important addition was made to the statute of the order by presidential decree. From 2011 onwards, persons awarded with three Orders of Courage, when committing another selfless or courageous act, can be presented to the title of Hero of the Russian Federation. 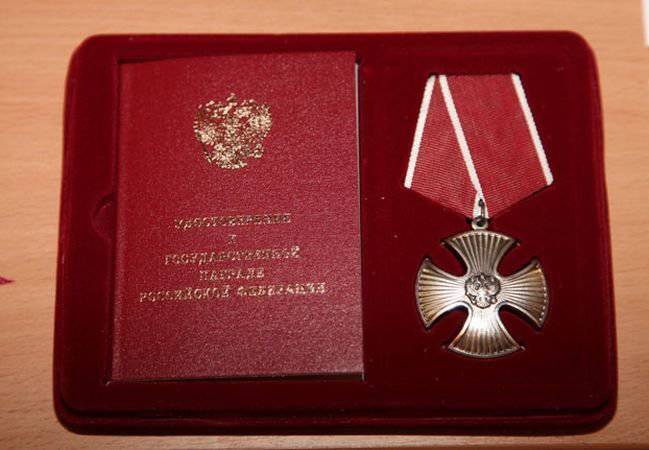 When developing the order, the militia cross of 1812 was taken as a basis. At the time of approval of the sketch of the order by the artist E.I. Ukhnalev, a variant with an overhead double-headed eagle (gilded), large in size, was proposed. But this option was not approved. The candidate took part in the creation of the sketch for the Order of Courage historical Sciences, leading specialist of the State Heraldry P. K. Kornakov. He, on the basis of the assignment of the Commission for State Awards and the State Heraldry, performed the modeling of the order. The author of the idea of ​​the Order of Courage was G.V. Vilinbakhov, the state herald of the Russian Federation. The Order of Courage was made at the Moscow Mint.

The badge of the order is an equal-end cross with rounded ends, relief beams and a raised edge on the edge. The distance between the ends of the cross is 40 mm. The award is made of silver. The State Emblem of the Russian Federation is placed in the center of the cross, the image is made in relief. On the back of the order is a relief inscription: "Courage." This inscription is made of stylized letters horizontally. Also on the back is the order number. With the help of a ring and an ear, the order is attached to a standard pentagonal block. The pad is covered with red silk ribbon, the edges of which are strips of white. The width of the moire ribbon is 24 mm, the width of the white stripes is 2 mm.

The first decree awarding the Order of Courage was signed by the President of Russia Boris Yeltsin on November 11 of 1994 of the year. Orders of courage were awarded to the deputy commander of the flight squad V. Ye. Ostapchuk and the commander of the helicopter V. P. Afanasyev for courage and bravery, which were shown in saving people from the Yakhroma cruise ship that suffered distress in the Barents Sea. The first mass award of the Order of Courage took place on November 25 of the same year. On this day, the President of the Russian Federation signed a decree awarding 17 troops. All of them were awarded for the courage and bravery shown by them during the neutralization of explosive objects and demining the area. 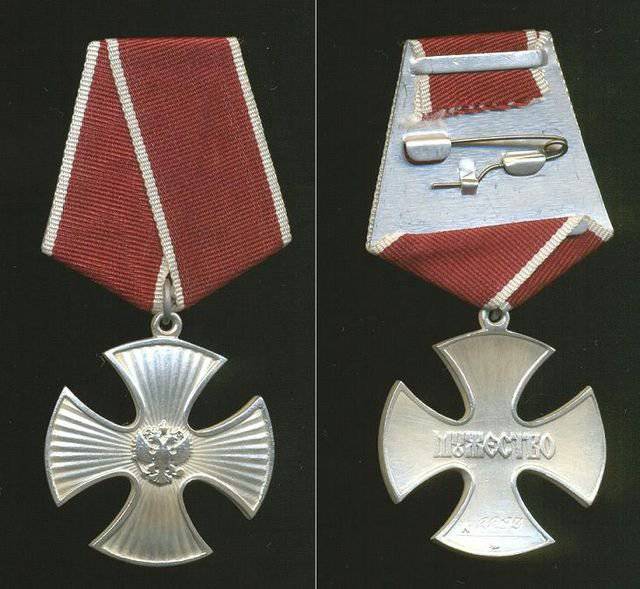 The overwhelming number of awards by the Order of Courage falls on military operations in the North Caucasus, in the territory of the Chechen Republic (the first and second campaigns). Among those who received this award on the battlefield are the commander of the 58 Army, Lieutenant-General V. Shamanov; Colonel General A.L. Shkirko, Deputy Minister of Internal Affairs of the Russian Federation In 1995, posthumously, the Order of Courage was awarded to 39-year-old Colonel V. Selivanov. Selivanov was the head of the information group of the intelligence department of the Airborne Forces headquarters. The paratrooper who successfully fought 2 of the year in Afghanistan, who took part in 57 combat operations, from December 14 1994 was in Chechnya as part of a task force. He died in Grozny on January 1 of 1995.

22 August 1996, the presidential decree for the heroism, courage and endurance awarded the Order of Courage was awarded the crew of a civilian IL-76 aircraft consisting of 5 people. The crew was captured in Afghanistan by the Taliban, but managed to escape from captivity.

The Order of Courage in Russia was awarded to participants in the events of the distant past. So, on May 9, 2004, Soviet sailors were awarded fleet, crew members of the K-19 nuclear submarine, which crashed while being in the northern Atlantic, in July 1961. Then the sailors managed the almost impossible: they managed to save the atomic ship and drown out the nuclear power plant of the boat, bringing the ship into a safe radiation state.

The youngest citizen of Russia, who was awarded the Order of Courage, is 7-year-old boy Zhenya Tabakov. He was presented to the Order posthumously. 28 November 2008 was a student of 2 class died trying to protect his native 12-year-old sister from the rapist.

According to the materials of free sources