Gop-stop from the "warriors of Narnia" 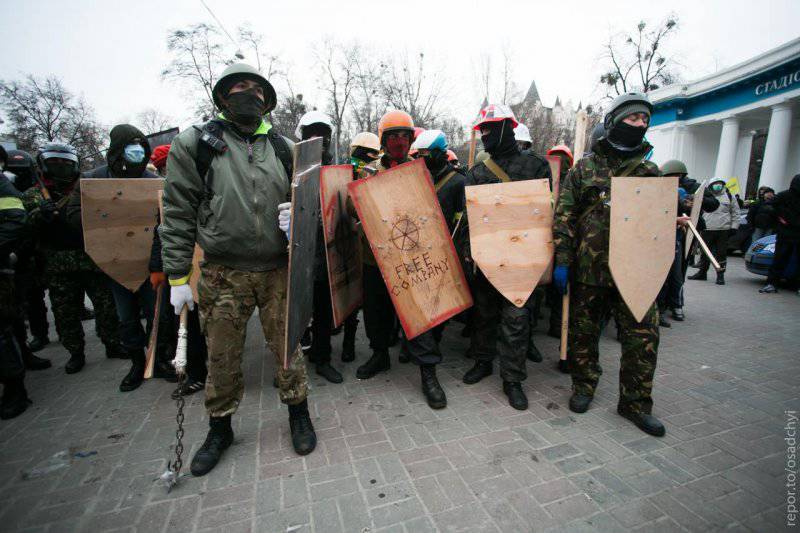 “If today there is a call with information about some incident in which people in masks appear, the operatives simply refuse to leave,” an employee of one of the Kiev regional police department admitted to the newspaper correspondent in Kyiv. Robberies, arsons, shootouts, incomprehensible personalities on the streets with weapons in the hands became integral attributes of Kiev.

It seemed that with the victory of euromaidan, the common people could finally take a breath. Alas, hopes were in vain. Element, initially localized only in the center of the capital, overflowed the shores of Kiev Maidan, sweeping the whole country.

“If today there is a call with information about some incident, especially in which people in masks appear, operatives simply refuse to leave”

As the newspaper VIEW, reported, on the night of Thursday several dozens of equipped and well-armed thugs in masks seized the branch of Ukrbiznesbank in Kiev. Initially, as is customary in such cases, the information about the seizure looked contradictory. So, UNIAN reported that the invaders agreed to surrender only after negotiations with representatives of the Maidan Self-Defense, and many of them said “with a Russian accent”.

However, according to the UNN, with reference to the Kiev State Department of the Interior, the police penetrated inside, where they detained the invaders who did not resist. All of them, said in the capital police head office, citizens of Ukraine.

According to the latest data, the bank was seized by members of the “Warriors of Narnia” group, in their own words, related to “Maidan’s Self-Defense”. The attackers seized several Kalashnikov assault rifles, two dozen Makarov pistols, a Saiga carbine, plus another “trifle” like bits and knives. It is surprising that after a warning conversation they were all sent home! Say, they voluntarily surrendered their weapons, and it’s still not a fact that they are firearms.

“The identities of all 38 people are established, these are citizens of Ukraine. There are no grounds for their detention. Weapons that they voluntarily surrendered will be sent for examination. Now we are polling bank security and studying video from surveillance cameras. So we will establish who and what was engaged at night in bank, - the representative of militia told. - Night visitors explained to the law enforcement officers that they were “warriors of Narnia”. Some of them said that they came to protect the bank, and someone just passed by, and in the financial institution was by chance. "

The detainees were active participants in recent events in the center of Kiev. Newspapers have repeatedly mentioned the "warriors of Narnia" during the battles with the "Berkut" and during the seizure of the building of the metropolitan administration.

The case is certainly blatant. Banks, of course, were also robbed before Maidan, but so bold in terms of execution and number of participants in the attacks in the police reports of the latest stories Ukraine did not even appear in the gangster 90-s.

A few days earlier, a group of thugs in masks and with bats broke into the prosecutor's office of the Svyatoshinsky district of Kiev, beat the investigator and demanded that he close one of the criminal cases. As it turned out, the initiators of the attack were activists of the right-wing nationalist organization "White Hammer", included in the "Right Sector". Thus, they “accelerated the rate of lyustrami corrupt law enforcement officer.” The law enforcement agencies did not even try to stop the attack on the prosecutor’s office. However, this is no surprise.

No less resonant than the night attack on the bank, was the shooting of three traffic police officers near Kiev earlier on March 2. According to and. about. Prosecutor General Oleg Makhnitsky, the identity of the killers have already been established, they are related to the Maidan, but who these people are, he, referring to the mystery of the investigation, does not speak.
And it looks no less strange than such a liberal attitude towards armed robbers. It would seem that it is necessary to put them on the wanted list, publish photos in the media, and not hide the names of the killers. But now they practically do not recall this case, and sources in law enforcement agencies consider it unlikely in the current realities to bring to justice the criminals related to Maidan.

Provincials on the high road

“If today there is a call with information about some incident, especially in which people in masks appear, the operatives simply refuse to leave,” the senior officer of a Kiev regional police department told the VZGLYAD correspondent on an anonymous basis. - The authorities received instructions from the ministry in such cases to coordinate their further actions with the Maidanov's “Self-Defense”. The situation is unhealthy. Our guys are intimidated and demoralized, many have laid on the report table. Everyone knows Sashko Bily, terrorizing Rovno with a gun. But if you knew how many such cases remain unknown to the public! Because they do not even register with the police. ”

To put it mildly, not too calmly on the Maidan itself, literally teeming with firearms. If police patrols began to reappear around the city, they are still afraid to go to the "heart of the revolution". At night, gunshots are often heard here, internecine squabbles between various Maidan units happen almost every day.

There is no better (and possibly worse) situation in the regions, where the influence of local authorities on the situation is often very conditional. Without sinning against the truth, it is safe to say that dark times are coming for Kiev, and with it all of Ukraine. The dollar exchange rate changes several times a day, the number of jobs is reduced, the level of income falls. In this situation, many of those who remain without work and money simply have no choice but to go on a big road.

Unfortunately, this information practically does not get on the air of the central Ukrainian channels, which today are occupied exclusively with the information war against the “Kremlin aggressor”. But even supporters of unitary Ukraine, who don’t admit even thoughts about leaving Crimea from its composition, gradually begin to ask themselves: do we have the moral right to demand that the residents of the autonomy be with us if we are not able to restore order in Greater Ukraine?

“I am ready to turn to Putin for help”

The paradox, but even Western Ukrainian publications, covering the events in their home regions, sometimes accompany them with amazing headlines: "The Ivano-Frankivsk public is almost ready to turn to Putin for ... help to restore order in the city."
As the newspaper writes, about 150 residents of Ivano-Frankivsk came to the mayor Viktor Anushkevichus with a request to restore order in the city and protect them from masked unknown persons who allegedly walk around the streets of the city and terrorize its inhabitants. As an example, they cited the case in the village of Vovchinets, where representatives of the Right Sector threatened with weapons the deputy of the village council.

“What is happening in the city,” Anushkevichus admitted, “is Makhnovshchina.” According to the mayor, today the weapons stolen by the radicals during the storming of the regional administration of the SBU (earlier this statement was called a provocation) are “used” by the people;

Meanwhile, prices in Ukrainian stores, taking into account the devaluation of the national currency by a quarter in just a couple of weeks, went up. So far, all this is not so painful as the sadly memorable times of shock therapy during the first years of independence. But everyone understands that the main difficulties lie ahead.

In Kiev, in queues in stores, in the markets, in public transport, some say that they are waiting for utility payments next month with fear, when Ukraine will have to pay new tariffs for Russian gas, others agree that the revolution has clearly dragged out and it’s time to start doing real by deed.

And yet the obvious majority of ordinary citizens now only shrug their shoulders, trying to avoid such topics, especially in conversations with strangers. Sadly, Kievans, who were friendly and sociable, had increasingly begun to withdraw into themselves. In the eyes of many passers-by, anxiety is becoming clearer.